I wanted to compile videos, notebooks and information about the Paddy Doctor Community Competition.

Please add any comments or what you think is missing.
And would be great if you share your experience and things you have tried.

The Kaggle community competition Paddy Doctor: Paddy Disease Classification was introduced to many of us through this forum post: Practice walk-thru 6 / chp1 on Kaggle!. There @radek put together a repository and instructions on how to submit to Kaggle from Paperspace and a list of questions and things to try on that dataset.

How it became part of the fastai way of learning

Next day in Live coding 7 session, Jeremy asked: “ok, Radek, you want to tell us about what this thing is?”. “This is the fastai way of learning”, he replied before start explaining his post.

From that point the competition became an increasingly important part of the course and live coding sessions. And (I think that) many of us learned the fastai way by trying that competition with our own hands.

The road to the top

In the live coding sessions Jeremy showed us how to explore and solve many things. From setting up and automating the creation of a work environment, to techniques as progressive resizing. Without being sure of what I was doing, we were looking inside a model, digging fast.ai code base, tutorials and documentation, creating custom loss functions… Jeremy shared with us fastkaggle for automating Kaggle stuff.

Most of what was covered was translated into these 5 notebooks:

Part 3 notebook got Jeremy to the top of the leaderboard, but not for too long.

Students passing to the top of the leaderboard

At some moment two students passed Jeremy in the leaderboard.
@kurian posted this topic Tips on how to improve your accuracy on Kaggle discussions.

Some days after another person who reached the top posted Thanks Fast AI!

This community competition ends in a month.

Competitions are great to learn data science but I suppose I’m not alone in the experience that in the first few competitions you are perhaps only learning to compete. To create the bases of code and understanding for experimenting a little more in the i(th) competition. Whichever your iteration is, you can start now with Jeremy’s Kaggle Notebooks. They are a synthesis of the video lessons and live coding sessions.

There are lots of fast.ai students in the leaderboard.

I hope there are going to be wonderful notebooks and discussions about techniques and approaches at the end of the competition.

Lessons with mentions about Paddy Competition

Intermediate/Advanced things to try (or to get familiar with)

I haven’t tried much of the techniques and tricks referenced here (yet). But trying to understand how some of them works makes you think about the internals of the model, the functions involved, the fitting process. I personally ended tweaking the Excel/Sheets files again simulating “target encoding” “label smoothing”.

Some of these resources come from @kurian topic Tips on how to improve your accuracy.

I am trying to apply MixUp to the Multi-Target implementation from Multi-target: Road to the Top, Part 4.

When using only disease as target it trains fine, but it seems MixUp does not work with the custom loss function.

Could anyone point me on how to do it?

Well it looks like the Paddy competition has closed and there has been quite a reshuffle in rankings…
Paddy Doctor: Paddy Disease Classification | Kaggle?

Well the Paddy Disease Classification competition has finished. I was pleasantly suprised to jump from #102 on the public leaderboard to #74 on the final private rating, with a score of 0.98502. Excluding submissions below an arbitary cutoff of 0.7000 (~600 competent entries), that puts me at around 12.5%, which I’m really happy with. One of my submissions scored 0.98732 which would have got me to to #27, but it wasn’t auto-selected for final submission since its public score was lower. Thats fair since random chance plays its part in any particular alignment.

Here are forum members that could be identified:

So thats 16 Fastai aficionados in the Top 100, of which 5 were newcomers to Fast.ai this year. Interesting to see there was only a 0.34% spread in the top 100.
Note, there were about 600 competent entries.

If I’ve missed anyone (especially anyone after the first 100 where I stopped transcribing), msg me to be added.

Well, it didn’t end well for me in the leaderboard.

Nevertheless, by giving a look at my submissions I found interesting insights:

This simple model performed the best between my submission. Even though its Public Score was not good at all.

This model was trained locally mostly with these lines of code:

It’s courious that this model was trained with same parameters as the previous one, but using seed=42 instead of 70. Results are the other way around. An acceptable Public Score with a poor Private Score.

We can see here how much the score changes by only changing the seed.
Would be great to ensemble them and see its performance.

Another interesting submissions were ones taken from Jeremy’s Notebook Scaling Up: Road to the Top, Part 3. I explored these two Resize options for the vit model:

These models were trained with different seeds.
Jeremy mentioned and recommended that for ensembles.

An ensemble of models 2 models each with and without TTA resulted also best of my scores.

The ensembling was done by selecting the most frequent values by row, and setting some rules from the confusion matrix when there was a draw. That’s why I called it “manual tweaking”. Probably an ensemble taking the mean of probabilities would return a similar result, but I didn’t try it, should try that.

Most of my submission were done trying different things starting with resnet34. At the end gains in Public Score didn’t translated to gains in Private Score. They were trained for lots of epochs. I was also trying to understand and apply some techniques that are visible in the descriptions below. 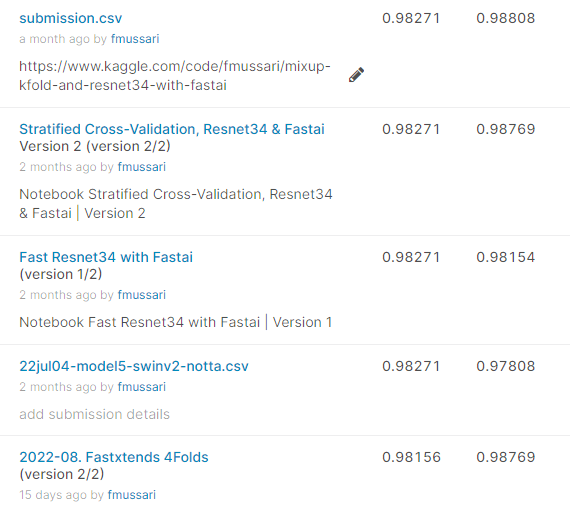 These are some notebooks I shared during the competition that achieve my final score of 0.98271.

Of course the cases shown aren’t enough to draw conclusions, but I would say some general or known things that were confirmed :

Looking forward for the next competition! (with new ideas to try)

I just fully agree with points 1&2 of your conclusions. I noticed the same pattern in my experience also.

Thanks for writing this and I would encourage you to post this in kaggle discussion forums also. 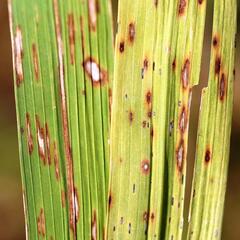 Identify the type of disease present in paddy leaf images

hey @bencoman, I was part of the live course and went through the code walkthrus. My submission was entirely from the stuff Jeremy showed us, and I ended up being the 17th in the private lb. Jumped 43 places

Thanks Kurian!
Your Kaggle Discussion posts during the competition were very insightful.