I was reviewing the RNN notebook and have a couple questions.

Why do we use np.stack and not np.asarray? I experimented some and they seem to do the same thing, but wanted to make sure I’m not missing something in thinking that the purpose of np.stack here is to convert python list to numpy.ndarray: 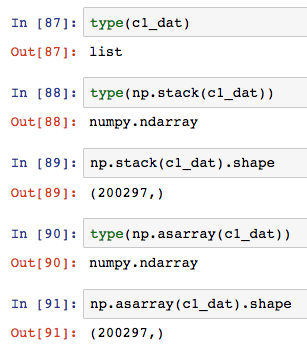 The second question is, why did we omit the last two elements in c1_dat? I made idx shorter to see if I can figure it out: 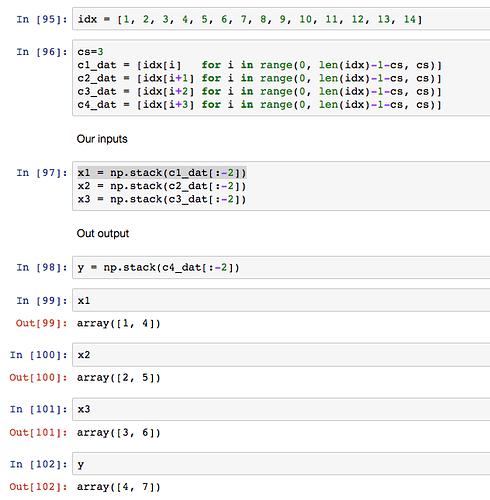 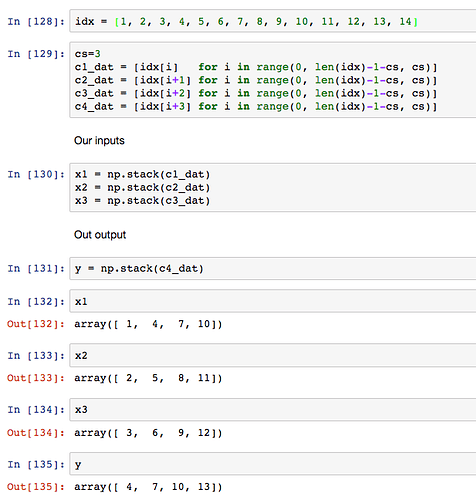 I thought maybe it’s dealing with idx length that is not cleanly divisible by 4 but it seems to handle it fine.

Any advice would be appreciated!

@hiromi I was wondering about both of those too. Seems like np.stack works like np.asarray, but np.stack can also take an axis argument.

As far as the index math goes, I would have thought we’d do something like this:

xs takes the place of x1_dat, x2_dat, etc, or rather their stacked version.

[Edit: Ah, whoops, forgot that we basically do that a little further down in the NB.]

Am I making an off-by-one mistake with those ranges? The largest possible start index for the contiguous character slices would be len(idx)-1-cs: len(idx)-1, since that’s the last index, minus cs, so we have space for the characters plus the target character. E.g.

I don’t see any off-by-one error. I compared the original expanded version and compact version without -1 or -2 (I now see that this one disappears in the compact version), and works as expected. Most error occurs when there are not many items in idx. By removing -1, you can train when len(idx)=4 (just enough to predict the 4th character by the first three):

I have created a PR and see what @jeremy thinks:

Fixing indices for generation of input and output

@cqfd, could you double check the code change for me?

Yeah I guess you’re right in this case - np.stack is going to be different for when axis!=0. I used ‘stack’ here because I think this is a better semantic match for what we’re doing.

The second question is, why did we omit the last two elements in c1_dat?

Have you tried it without omitting them? It may just be that I didn’t think this thru clearly enough when I put the class together.

Thanks for the response, @jeremy

I experimented with the entire array (i.e. removed -2) and also per @cqfd’s suggestion removed -1 from:

They worked nicer for small idx so I created a PR and attached the gist of experiment.

Thanks for bringing up and discussing these points. Had been scratching my head over this

Hi @jeremy I am aware of there was an update for nlp (update ID#ade043e). I did git pull and conda env update. However, I got the following error message by running from fastai.nlp import * which worked previously. I tried to reinstall spacy but the error persisted. Any idea on how to resolve this problem?

@moody here’s how to install a spacy model: https://spacy.io/usage/models

Hello, I’m running through the lesson 6 rnn notebook and am noticing that my Multi-output model is getting significantly different results than the same code in the video.

You’ll notice below, after the first fit method, my val_loss ranges from 2.4 to 2.0 and after the last fit it goes down to 1.99 (which is worst than even the initial rnn implementation). that compares to val_loss from 0.95 to 0.6 in the video.

could there be something in my setup that could be causing the difference in performance? Seems like a large enough variance that there must be something funny going on.

I was just listening to this again and I was curious about the autoencoder described around 38m that won the insurance competition? I looked for a recent competition and I’m guessing it’s the Allstate claims severity based on the description and timing but I didn’t see any reference to it in the first place winner’s article:

How severe is an insurance claim?

I’m guessing I’ve got the wrong competition @jeremy? I’d love to see the link to the solution described in the lecture.

If anyone gets KeyError: 'ffmpeg' running the SGD notebook (in the animation cell) you probably need to install ffmpeg. In Ubuntu (Paperspace fast.ai machine) I did:

Then restarted kernel and it worked.

I’m facing the same issue. If anyone could pinpoint what is causing the differences in output loss values it would be of great value.

Did anyone try the test function on CharSeqRnn model? In Jeremy’s class, we have seen the test model get_next function on CharLoopConcat model where there was only one output. However, for multi-output case, say CharSeqRnn, there are 8 outputs. I adapted the get_next function to retrieve the indices of all of the 8 outputs by passing it through torch.max and generated the subsequent characters. However, I see gibberish. I’m not sure if I messed up the get_next or is it because of insufficient training.

Did anyone try this? If yes, could you point me to what am I doing wrong? The code I’m using is the following. 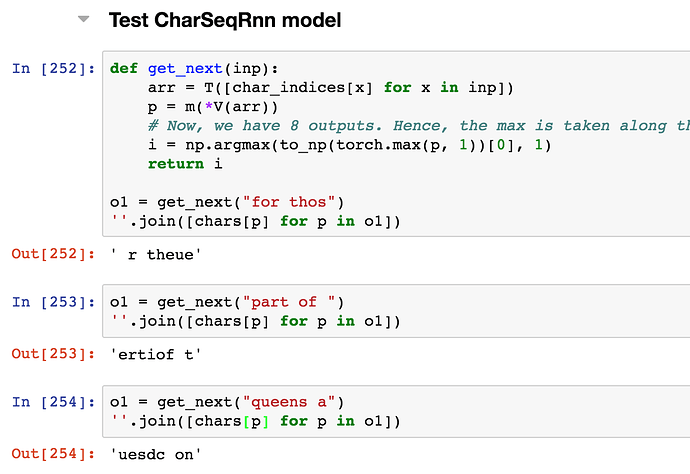 I followed this for Windows environment and then restarted kernel. 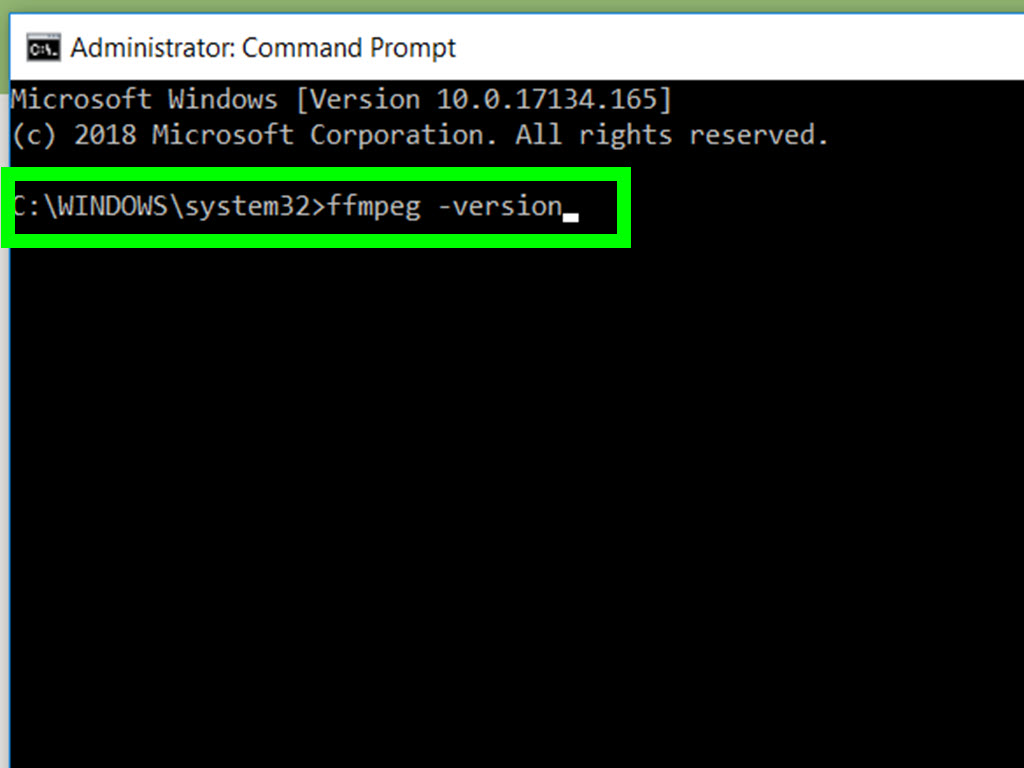 How to Install FFmpeg on Windows

This wikiHow teaches you how to install FFmpeg onto your Windows 10 computer. FFmpeg is a command line-only program that allows you to convert videos and audio into different formats, as well as record live audio and video. Open the FFmpeg...

Do you mind sharing the losses as well? Jeremy mentioned that the loss dropped from 1.30 to 1.25 then it started making sense. Try to train the model for another hour or two.

I think it’s actually correct that the first few characters look like gibberish because each n-th output character is trained on the first (n-1) characters in the input sequence.

Said differently, for an input sequence:

the training label is off-set by one character:

and the output probabilities are learned from whatever sequence of characters that have run through the RNN previously on that particular forward pass.

So for the 1st output, it’s trying to learn the label 42 from the first and only char input of 40

The earlier characters in the output are gibberish because they don’t have as much of the training sequence to learn from as the later characters.

If you look at just the last characters of each get_next() sequence in your CharSeqRnn test outputs, you’ll note that they match up with the get_next() test results earlier in the notebook from single-output models:

EDIT: sorry about the earlier delete & restore. I thought I understood this correctly but wanted to revisit the lectures to make sure…so now I’m slightly more sure?

Here’s the new stuff I learned:

I think this happens for this particular model because the hidden state is reset to zero at the start of each forward pass:

In the lesson 6 video, someone asks a question about this very problem at the 2:06 mark and Jeremy mentions a solution is introduced in lesson 7.

EDIT 2: here’s the section in lesson 7 video where Jeremy explains this problem of throwing away the accrued hidden activations (h) between each 8-char minibatch segment and introduces how Back Propagation Through Time (BPTT) solves this and its related wrinkles: https://www.youtube.com/watch?v=H3g26EVADgY&feature=youtu.be&t=6m14s

I have a question about the 3 char model. I notice that the sequence generator does not all possible sequences. Here are the first two sequences:

There were two other possible sequences between the above sequences that are not used:

Generally I generate sequences with something like an optimized version of the following:

This ensures that every possible sequence is included. Is there some reason why half of the sequences were omitted? Or was this an accidental oversight?

EDIT: I may have asked the question a bit too early. It looks like the next section when generating 8 characters uses a method similar to my suggestion.