Finally, you can use the same computer to run Windows 10, while coding within a linux environment AND utilizing CUDA operations for deep learning. I myself prefer Win10 as my daily driver. But when it comes time to code, I am usually remoting to a cloud environment, or setting up a virtual machine, or running a separate computer without a monitor (headless) because it has beefier hardware. As of yesterday (6/17/20), NVIDIA has detailed steps to enable GPU processing within the Windows Subsystem for Linux (WSL) version 2. This could very well be the “dream” setup if have the hardware to run a GPU, and a bit of patience to get things installed. With Version4 of fastai course soon to be released, maybe now is the time to get your local machine configured in this fashion.

Caution:
With this being brand new, it is not for everyone. It can take several hours to get configured from a clean installation of Win10 into an fully operational environment. You need to install “beta” versions of software, some of which have expiration dates. If you don’t turn off updates, your system may change and things break. You need to install special drivers for the video cards. You need to register to even get access to the downloads. Some of these downloads may even be restricted for export, I do not know. But if this is something you want to tackle, read on.

Installation steps:
A detailed article on CUDA and WSL2 can be found here: 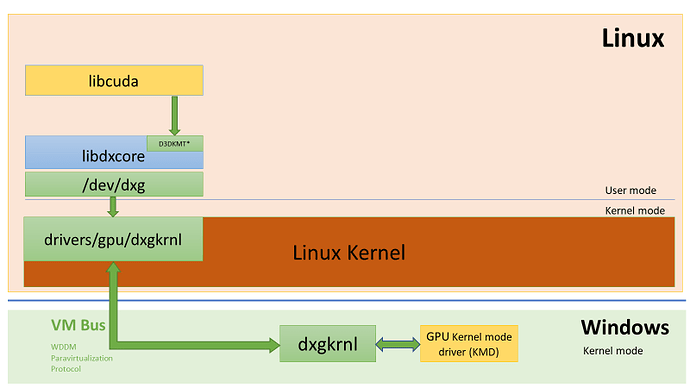 
The more general steps that need to be taken can be found here:
https://docs.nvidia.com/cuda/wsl-user-guide/index.html
Here is what I did the first and/or second time trying to get this installed:
Setup Windows – Base Version

Setup Windows – NVIDIA driver
Do not proceed until you have updated your windows version to 20145 or higher. Also, this is not the same general availability driver. It is special, and must be done from the link shown.

This should give you confidence that the general pieces are installed to use docker and cuda, but….

Setup Ubuntu – CUDA
…you may not have access to a CUDA container, or don’t want to use docker. In that case, it appears that you need to install cuda at the Ubuntu level. When I tired first time out, I could not get fastai to use the GPU even though it was working fine in docker. When running Ubuntu natively, we don’t have to install CUDA, as pytorch brings over what it needs. But this is no ordinary install. There needs to be communication to the video driver and that can only happen with installing CUDA (I assume).

I’ve been very frustated with this. I have the proper versions of Windows 10 and the WSL2 kernel, re-installed the NVIDIA driver twice, but I can’t get the GPU to be recognized. For instance, after the process (and without even installing CUDA), I get torch.cuda.is_available() to return True, but when I try to put a tensor on the GPU, the kernel freezes (not even crashes, just hangs out forever).

For the TensorFlow docker (and using the WSL docker, as you said the desktop docker is useless), I get an error when testing if cuda is available

I followed the instructions with a minor change and have the GPU working under WSL2 with Ubuntu 20.04 on two separate computers.

wsl cat /proc/version only works if a Linux distribution is installed.

When the prompt and warning message comes up for Ubuntu 20.04 and Docker, I waited 20 seconds and let it install rather than hitting Ctrl-C. It installed successfully.

Output from docker run --gpus all nvcr.io/nvidia/k8s/cuda-sample:nbody nbody -gpu -benchmark on my laptop

Has anyone tried building an image for fastai course-v3 in docker and run it on WSL2? I wondering if the image I have build would work the same in WSL2. On a Ubuntu host, I had issue with Pytorch and swift inside docker, workarounds :

Hmmm. No success yet. After joining fast ring, my winver got bumped to 20150.1000. Then I installed the preview WDDM 2.9 NVIDIA driver and afterwards wsl2 with Ubuntu 18.04. Kernel was already 4.19.121-microsoft-WSL2-standard on a fresh install. However, I am still stuck:

Googling indicated that this might imply a busy device but I am not sure how to get any further. Any ideas / hints?

I’ve had mostly success with Ubuntu 20.04 on WSL2. I’m using an Intel 8700K, 1080ti, 32GB memory, 1TB SSD. The display uses Intel graphics, not the GPU. The python and tensorflow docker containers are working. fastai2 works both in and out of docker containers.

The only issues I’ve seen is that GPU memory has garbage collection issues. I have to run course_v4/01_intro.ipynb with a batch size of 16 to get it to complete without running out of GPU memory.

Does anyone know of a community forum dedicated to WSL2 GPU and data science?

Thanks to @FourMoBro for his brilliant writeup.

I suppose we could exchange our WSL2 environments using the wsl --export feature. That might duplicate the issue on the other’s system. 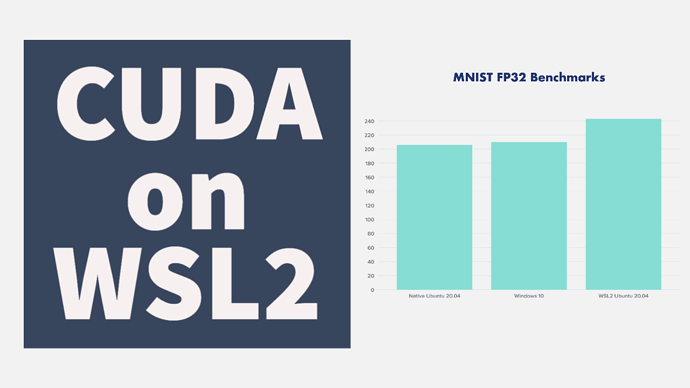 Cuda on WSL2 for Deep Learning - First Impressions and Benchmarks

TLDR: It's a little slower than native Ubuntu, but the future is bright!

So this evening I updated Windows to version 20161.rs_prerelease.200627-1754 and also updated the NVIDIA driver from 455.38 to 455.41. My training times have dropped by over 50% in the few samples that I have run, and my times are closer to what bare metal Ubuntu was giving me. It is nice that this performance has improved in just under 3 weeks since release.

Thanks for the fast reply. I had been on a 20H2 Windows Insider with an acceptable build level (I don’t remember the exact build, but know I had checked against your instructions) and it wasn’t working there, so that’s why I had reverted. I will try again.

On Windows Insider “dev channel” (the “beta channel” wasn’t enough) with Build 20190.1000 now. And it did finally update the WSL kernel. It gave me a green screen crash during the update, but all worked out OK after a couple more reboots.

Thanks for your instructions!

I have been getting the GSOD more often these past two builds. I hope there is some stability in the near future.

Is there any word on when WSL2 comes out of beta? I’ve been reading July then August for a while now and there seems to be no sign of it. Given the discussion here, I think I’d rather skip the beta for now and wait for something a bit more stable…

The install is working for me now, following the instructions. It seems a bit slower that expected, so I will be debugging that soon. 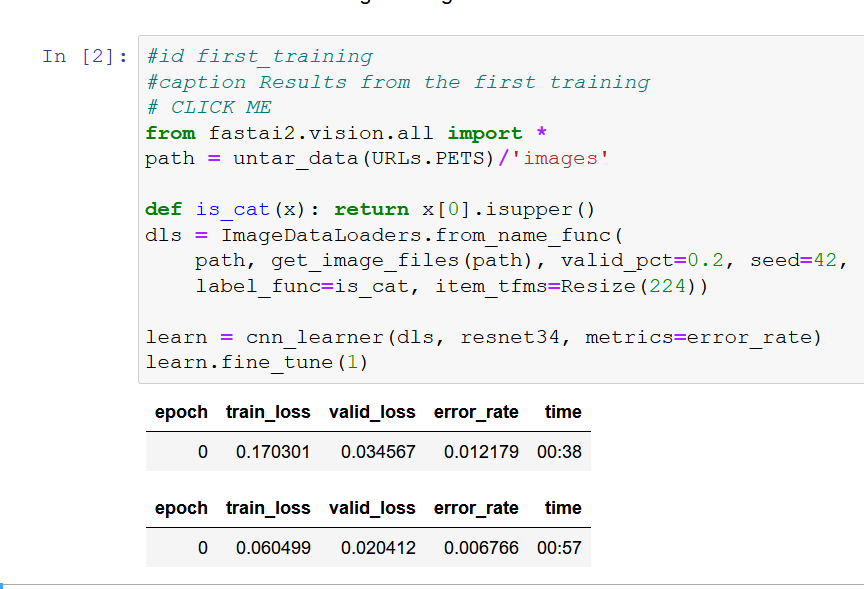 When trying a similar notebook, fastbook/01_intro.ipynb, I get 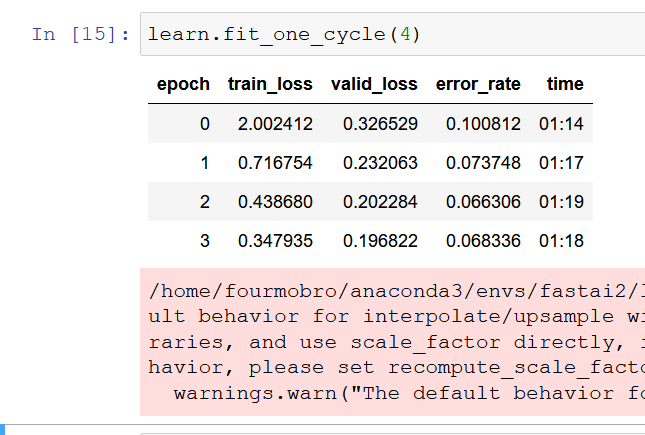 So there is speed comparable to bare metal without needing to dual boot or the like.

Normally on windows the num_workers has to be 0. Is this issue solved and working ?

This code is not really running on windows, it is running on Ubuntu using WSL2.

So, with WSL2 I can run num_workers bigger than 0 ??? That’s what I wanted to learn. Did you test it?