Deep learning uses lots of compute; we (@jcannell and I) created Vast.ai to help lower the cost of all that compute. Here’s a 30 second demo:

We’ve aggregated together hardware, performance, and cost data for both current cloud offerings and peer rentals into one place to make it easier to compare and rank. If you’re interested in reducing your training costs you can rent a consumer machine and get about 3 to 5 times more performance per dollar.

Edit: The fastai $20 credit promotion all been claimed. New users still receive credit sufficient 5 to 10 hours of GPU time, aka $1.

We support the fast.ai docker image provided by paperspace - just select it from the list when renting an instance. (We also fixed a minor issue with the base container that prevented lesson 6 from working - let us know if you find any others!)

To reproduce that result, select the pytorch/pytorch image, connect to the jupyter notebook, open a terminal (new => terminal), and then run the following commands in the container:

And finally, if you happen to have a powerful deep learning rig that you aren’t using very much, you could use our service to rent it out.

Feedback much appreciated. We are also available on our discord server.

Thanks for taking the time to make sure fast.ai works well, and to provide a nice reproducible performance example. The service looks pretty nice based on my quick scan! Looking forward to hearing how folks go with this.

One suggestion: please consider highlighting that people shouldn’t consider their data safe/secure on this service. Your current coverage of this issue is buried deep in the FAQ, and isn’t as clear as it could be. Instead, all new users should be made aware of this when they set up their first instance, because it’s important and (for many) unexpected.

Has anyone tested hosting an instance on Ubuntu 18.04?

I’m sorry, but I’m very new to the cloud.

Please let me know if I did it correctly or not.

I went to create then select image where I selected paperspace/fastai as I don’t know much about the requirements that i need to run the DL/ML notebook so I sort it by Price(Asc) and selected (RENT) the first one.

Then I went to instances and started the instance. It’s really easy just like running jupyter notebook in my local. But Now I have stopped the instance but still, Lifetime is still running. Do I have to destroy it?

I’m guessing the billing depends on the Lifetime

Now, if I destroy it any changes made to the notebook will stay?
and if I want to get the notebook to my computer what should I do?

@Jifu - We don’t support Ubuntu 18.04 yet for hosting. We have had a couple hosts try it anyway and run into various problems. We will of course support it in the future at some point.

Thanks for your reply! As soon as support for Ubuntu 18.04 is released, I’m looking forward to try your service.

@SKS If you stop an instance, you’re not billed for the GPU time - billing is based on time spent running, not time spent existing. There is a small charge to keep an instance’s data around, but almost all of the instances’ cost is billed only when running. If you destroy an instance, any data on it will be lost. You can download your notebook using jupyter’s download button: 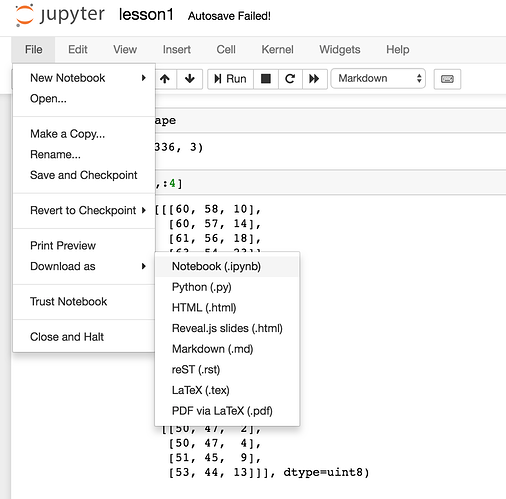 @jeremy That’s a pretty reasonable concern! We’d like to be transparent by design rather than throwing up a dialog box or etc. We’re thinking about how to best display levels of provider verification and security on the cards.

(To be honest, I feel like just the fact that we share that we’re doing peer rentals at all is already much more transparent than competitors who are using peer providers but obfuscating it.)

Also, the fastai promo code is on its way to running out. Just a heads up! If you have trouble applying it, that might be why, but reply here, email us, or poke us on discord if you have any issues.

Access with Jupyter notebooks through the browser works fine but when I tried ssh I was asked a password. I checked my email to see if I received it but no

@teeyare - So it shouldn’t ask for a password. If it does, that typically means your ssh key wasn’t set properly. We could use better ssh key checking to prevent this - but right now if there is any typo in the ssh key you have set, then ssh connect will ask for a password.

Is there some more info around about where these machines are and how to use them? I.e. are they typically people’s home machines with GPU’s connected through home internet? Is it possible to ssh into them, maybe through some kind of reverse proxy on the GPU machine that can only reach some whitelisted addresses? Is it possible to create and run new docker images, maybe after submitting them somewhere and getting them approved? Thanks.

@clipmaker - Yes, you can ssh into the machines, use scp, etc. Most of the machines are behind firewalls but proxy deals with that. Our GUI asks for your SSH public key before you rent a machine and sends it over for you. At one point we did allow custom docker images but that was removed at some point due to some issues, we will probably renable it in the near future. What docker image did you have in mind?

@jcannell Thanks! Do the machines have reasonable network connectivity for transferring data sets? I’m used to machines in data centers so if these are on home or office internet I’m not sure what to expect.

Re Docker: I was thinking it would be cool to have a image for Leela Chess Zero, lczero.org. Any interest?

Network benchmarks are listed on each rental offer’s card. Many machines have pretty dang fast inet. We’ll allow creation from custom images in not too terribly long, which should allow that.

@lahwran, thanks, I’ll check there, though the rental cards are totally unreadable in my browser (Firefox 61 Linux). See screen shot. Can you make a simple minimal version of the web site with just the info and no styling? That’s almost always better. Screen shot: 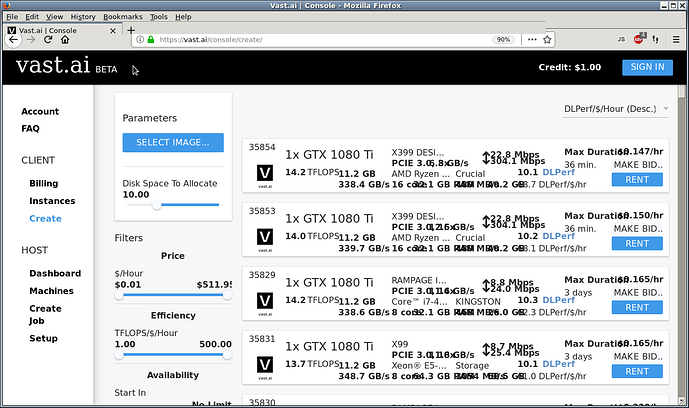 Ok, I made an account, haven’t spun up any machines yet but will do so. Beta test comments:

Crap, I wasn’t getting notifications about this forum for a bit, my apologies!

The best way is if you can put it on a webserver somewhere and then download it with wget. I’d use amazon s3 for this personally, since it’s nice and barebones and I like that; you could also use a more consumer focused tool, I think one person used mediafire pro, I also found jumpshare while googling around. the important thing is that it needs to give you a direct url you can download with wget.

@clipmaker, replying to your issues individually:

The best ways to contact us quickly are chat on vast.ai, which we try to keep to a 10 minute or less response time all the time, or our discord, which we respond to within a few hours but also has other hosts and clients on it. Apologies for the long response time here, though, I wish I’d noticed this within a day!

I’ve figured out a pretty seamless process for using vast.ai… It takes about 2 minutes each time to get up and running on a new GPU instance. Thought I’d share in case anyone else is interested.

Hope this is helpful to someone.