I got the same error but was able to run the first class without a problem. As you said later on it might be an issue but we can always upgrade Numpy.

Colab does not appear to support use of ipywidgits so I suspect this is why ImageCleaner does not work).

thanks @raimanu-ds this seems like what i need to do.

Where are models stored with learner.save?

I am looking for training my model on colab and then using it on local for prediction.
The model folder in the content/ only shows resnet model.
And not the model stored by me.

Where your model is saved depends on your what your path is set to.
Try running path (or what you have named your path) and look in that structure.

If you have not set the path then the model is by default “hiding” among your training data.

UPDATE
What I wrote above seems to be for older versions of fastai.
In later versions your saved model will be in the /models directory in your project directory, by default.

Hi @iyaja
I wonder where does Colab save fastai library?

yes, I can see that too, but how to find such folder? could you show me in pictures? thanks!

You can view the directory tree in the colab file sidebar. In the notebook you can run shell commands by prefixing with ! (!cd, !ls and so on).

Thank you very much! I found it! 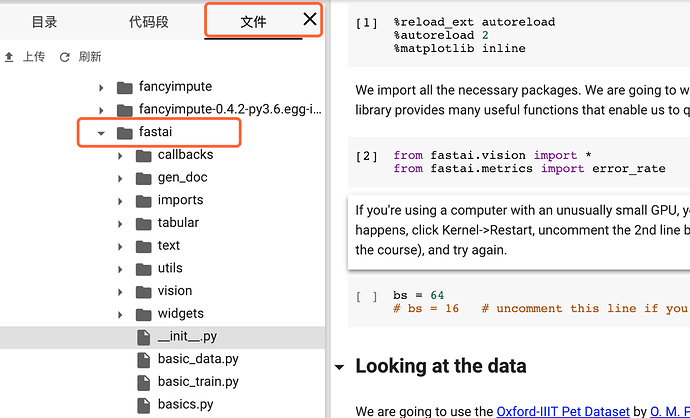 Hey, suppose i have uploaded my image folder to google drive manually using GUI, can i access those files through the ipnb?
I have “mounted” using using the code from the fast.ai colab tutorial already.

Yes. Depending on your mount point, the path will be something like: “/content/drive/My Drive/path-to-images”.

still can get only half way thru my first notebook
any suggestions ?

this link should allow editing … curious to see if anyone does.
https://colab.research.google.com/drive/1xW5pnTcEysdEem6Mj29wUDgi6eDtvMhr

I have been playing around the with lesson2-download notebook and was wondering if any of you have found a workaround for ImageCleaner which seems to mess up the directories in Colab and forces to restart the environment.

I did see this workaround which could work if the dataset is fairly small but unfortunately, this is not my case

Any use of ipywidgets on colab will be buggy at best. Colab does not use a standard jupyter notebook and has a security model that is incompatible with ipywidgets.

Does anyone have a benchmarking fastai on colab script already set up I could make use of? (I made a little dummy task, but I don’t trust the results - it’s not a realistic test. An actual notebook would be a better test)

Otherwise does anyone have a oneclick run all notebook set up for lesson 1 they can share? ie all the bash and setup commands already done for colab, no manually twiddling around with paths and setup?

I want to quickly benchmark my box against colab just to see if my box is close enough to just use it instead of colab.

Also, I’m having some docker issues with smh and ipc-host that I need a benchmark test to diagnose further.

I have the same issue while running ImageCleaner on Google Colab and I have quite a bunch of dataset on for fungi images classification.

It disconnects, and it’s always busy and stuck on that step. I’m already using GPU runtime.

They are stored in the directory where you data is located. A sub-folder named model will be created.