I keep getting a Memory Error on a sample data with a small batch size. Not sure why this is happening (this is a model I’m trying to train from scratch).

Anyone have thoughts around how to even debug this issue? Everywhere I’ve read speaks about the batch_size which I’ve reduced to 8 and it’s still crashing…

Any off chance restarting the kernel would fix it? Are you also running on a aws instance or locally? Also noticed that your batch normalization does not have axis=1. Apparently it is important for an n channel input. 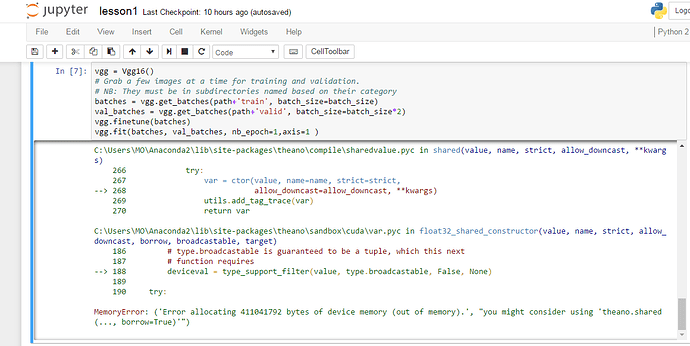 @maciej were you able to solve the problem? I am facing a similar memory issue.

I had to switch to bigger GPU, looks like 2GB is minimum to go with it

Similar issue using a T2 instance.
Is there a way to actually run the code using T2 ?

The answer is no with a T2. micro.

Just found this "The free t2.micro instance type recommended in the lesson does not have enough RAM to use the VGG16 model. "

I am trying to play around with other datasets and it seems that I ran into memory problem. I run my code in my own PC that has 32GB of RAM. When I opened system monitor after I run, let’s say,

I can see that it takes almost half of my RAM and won’t free it. Same thing happened when I open my dataset using bcolz, so when I open the rest of my dataset, I get the memory error message.

The lesson suggests to switch to t2.large. Alternatively, you can create a swap file on t2.micro and use swap: https://stackoverflow.com/questions/17173972/how-do-you-add-swap-to-an-ec2-instance

For my t2.micro instance (Ubuntu 16.04 AMI), the minimum swap file size to make lesson1 work is 2GB (with batch_size=1). With 1GB as in the stackoverflow example you’ll still run out of memory.

Note that some comments on stackoverflow talk about AWS charges for EBS I/O, so use at your own risk (I’ve just done it today so I don’t know yet if I’ll have charges).
Personally I created a script to add the swap partition on demand (and don’t persist it), and I reboot after I’m done using the swap (as swapoff won’t work)… just in case.

If anyone want’s to try out their environment using t2.mico. I found you can run the Mushroom Classification training without running out memory. https://www.kaggle.com/giuseppemerendino/deep-mushroom-keras-t-sne/notebook. It’s a very small data set but good for validating your environment is setup correctly.