I was wondering if I could use my own computer, a 2013 iMac instead of AWS for these projects. These are the specs: 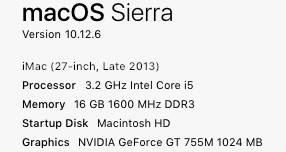 Update:
Never mind - it looks like 2GB is the minimum

This GPU probably only supports a very old version of CUDA anyway, so it’s unlikely modern deep learning frameworks would run on it.

One option for adding a new GPU to your Mac is to use an eGPU, which is a GPU in an external enclosure that you connect to your Mac over Thunderbolt. https://egpu.io