@t-v @stas unfortunately that doesn’t quite work. I had to put this back to get good results in the final bs=32 cell:

Otherwise it doesn’t have the gradients that it needs to get good results.

Do you mean with skipping some stats re-calculations? or are you saying that replacing:

and not skipping any calculations has a detrimental impact on the outcome?

However it doesn’t actually skip any computation at the moment, since you’re checking self.batch%2 , which is always true, since bs is even. You should instead create and check an iteration counter - if you do that, you’ll find you still have the dreaded “Trying to backward through the graph a second time, but the buffers have already been freed” error!..

So, we need to get a good understanding what is to be in the graph and what not.

all temp results are not part of the graph. Only factor and offset are since their calculation includes mults and adds params. You can check:

I guess the refactoring to reduce broadcasting added this complication of having factor and offset to be part of the graph. Perhaps this is wrong?

If you detach sums and sqrs, instead of x you end up with:

So now all those running temps will no longer do the right thing, since they will get changed by backprop and we want them to be fixed.

Moreover you are detaching them in the wrong place. You detach them at the beginning of update_stats, but then you make a calculation on them which involves undetached x and they end up being on the graph again! So you want to detach them after all calculations are done if you don’t detach x. But as I have shown above this is not right either, since a whole bunch of other temps are now on the graph and will be “adjusted” by the net.

Now going back to the very original implementation as it was presented in the class (with dbias), we get:

So it wasn’t detaching them either!

Only after you move them to the end of update_stats:

I’m still trying to wrap my head around this detach thing, so please bear with me if I’m saying an incorrect thing. If what I described above is correct, then you were getting good results not because of the better BN (or at least not just because of it), but because your temps were actually backpropagated, so the stats weren’t calculated on the running averages, but on running averages that are also variables that are learnable - i.e. the network was messing (in a good way) with those numbers that we intended to be fixed. Does this make sense?

If you detach all of those other temp vars, you won’t get the error. i.e. finish update_stats with:

at the very beginning of update_stats does the same thing, but more efficiently, since the code doesn’t need to swap temp vars back and forth to require grads and then not.

To conclude: decide which variables are to be fixed and controlled only by you, and which are learnable, and then use detach accordingly. Perhaps a significant part of the magic of RunningBatchNorm is a side-effect of a coding mistake

Specifically to the error:

“Trying to backward through the graph a second time, but the buffers have already been freed. Specify retain_graph=True when calling backward the first time.”

What I understood from Thomas is that pytorch compares the graph from the previous batch with the graph generated by the current batch - if the new graph lacks a node that was in the old graph that’s when you get this error.

That’s why you must repeat calculations that place all the variables that were in the graph on the very first batch, and they can’t be skipped.

I don’t know enough pytorch yet to explain why dynamically skipping a node is considered to be an error. So this is only a circumstantial explanation.

@t-v, please kindly correct me if I my explanation is incorrect or incomplete.

There are 3 ways you can go about it:

To get around my conflict issues in conda with pytorch nightly build:

In the past we used local directories to import from and there were no conda installs. So the basic use of datasets is to load data from the net. If fastai is cloned to your local environment or even just the datasets part and imported from there you could work without a conda fastai version.

I took from from the github clone 3 items

datasets.py
core.py
the imports directory with all its contents

I also installed for my own use

Here is a package list for such an environment

I’m not sure what problem you’re trying to solve, @RogerS49 - just install fastai in whatever way you like - conda, pip, local checkout and it just works with the part2 lessons.

Well I got rid of my conflict issues in conda with pytorch nightly build. This makes more sense to me as whats in those packages and dependencies are not really fastai it seems except around data URLs. I managed to run the whole of the 08_data_block notebook, perhaps I may run into other dependency issues I am not aware of. Thanks for your reply.

so now when you load a notebook from fastai_docs/dev_course/dl2 it will use these local fastai modules since '' (nb dir) is always in sys.path. This way you don’t have any dependency conflicts to deal with since you’re not using any package manager here.

This is more or less what you suggested you did above, just easier since you don’t need to go and fish out specific files from the fastai modules.

I just quickly plotted the layer norm vs batch norm for the sunny vs foggy day to double-check Jeremy’s thought on why layer norm doesn’t do well. And the plots confirmed it. 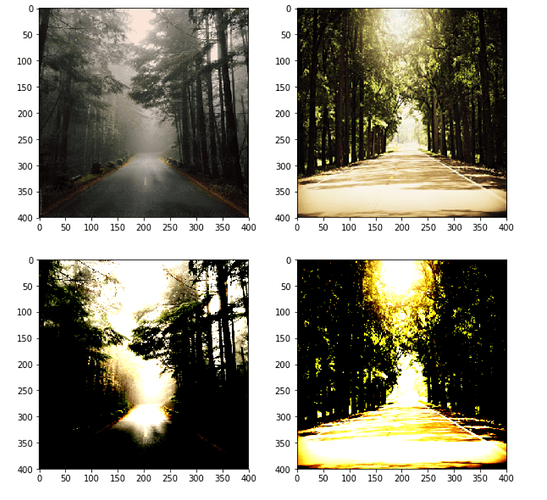 sunny_foggy_layernorm.PNG808×738 545 KB
Really hard to tell which one is sunny/foggy for the bottom 2 images.

For comparison, I did the the same processes for batch norm 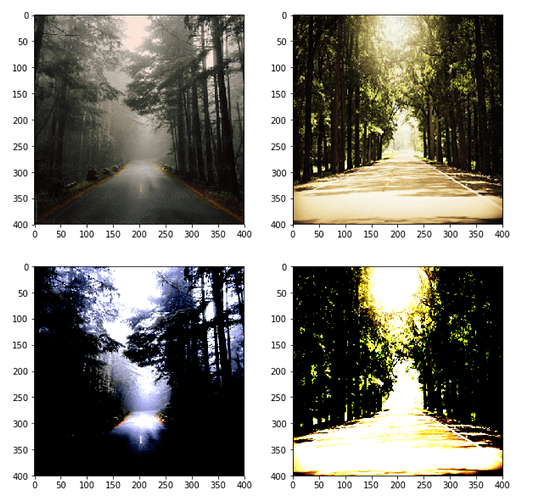 Although I can’t offer a resource, I can offer empathy. I was fairly relieved when Jeremy noted that his utility function for loading images took a week to develop. I would’ve felt like throwing in the towel if he had said he wrote it while eating breakfast one morning.

the Gof book has formed many software engineers (me included) : https://en.wikipedia.org/wiki/Design_Patterns

Go for The Swift Programming Language, a nice resource.

You can read about design patterns but in real life nobody uses them.

whats you PoV on these books, also newer versions like clean code or refactoring ?

Personally, while I totally get the idea of patterns and clean code, I find many books and articles on the subject verbose, sometimes a little dogmatic, I do not agree necessarily in the details (typically I find they make simple things complex honestly) and always dry to read. Maybe its like writing a book about salsa dancing: style matters but you just get it on the dancefloor (never ever with a book).

the clean code reference looks like good housekeeping rules.
concerning refactoring i have not read the book. However Martin fowler is one of my heroes and with a foreword of Eric Gamma (one of the authors og the Gof book) it doesn’t get better.

I think that design pattern are important in the same way that we expect certain components to be standardised when building a house. It is just too much mental overhead (and often short sighted) if everybody invents their own personal way of doing things. This is not to says that a design pattern is implement in identical ways in every language but the concept should transcend languages.

It is just too much mental overhead (and often short sighted) if everybody invents their own personal way of doing things.

I know some people have this point of view, and that’s fine. Personally however I find the exact opposite - I’ve found trying to shoehorn things into a set of predefined patterns limits my thinking and is harder for me to understand than avoiding that idea entirely.

Many design patterns (if not all, AFAIK) focus on Object Oriented programming paradigm. We are dealing with a mix of Object Oriented, Functional and Dataflow paradigms. This makes OO patterns partially applicable, but not that useful within a bigger picture. We need a new methodology and new design patters to emerge.

Fastai programming style gives us an interesting example and insights into what these patterns might be. Fastai offers examples of well thought-through use of decorators, closures, partials and compose. I wish Software Engineering methodology researchers paid more attention to it.

I like your point about the over-emphasize of OO patterns, I guess if I would find a book with coding patterns that look beyond languages and specific paradigms it would definitely be worth the read and the fast.ai code to me is the best source I am aware of. I still suspect programming like speaking a language is a skill, where you can’t just learn grammar and some elegant ways to express yourself to become a master.

good point concerning functional programming. The processor pattern is fastai is a good match for that

If you find such a book, please let me know.

I see Jeremy here being complementary about Fowler