How to avoid billing when using t2 and after releasing IP addresses?

I have been billed under EC2 Elastic Compute Cloud while using t2.micro, here is the detail: 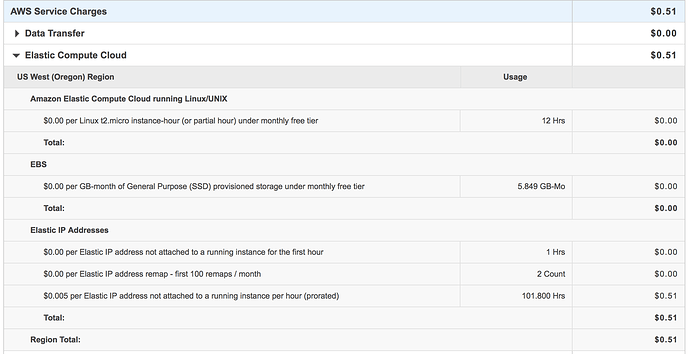 up to the point of this billing information I have only used t2.micro (I had mistakenly terminated one, but next day I got another. )

I think I have released all Elastic IP addresses.

Was the reason why I continue to be charged that I released all IP addresses even after I stopped t2.micro?

In order to avoid being charged for like the picture shown, should I associate the two addresses again?

Thank you so much Alex!

I have no idea why would I need DNS so I think I will try public IP first. As for using public IP, I have a few questions on public IP:

you need to find out the new IP to connect to you server using SSH or web. You can do it in the web console or using aws aliases provided with the course.

Thank you so much Alex, your reply is precise and very helpful!

EDIT: this isn’t correct. If you stop the instance, you pay for the IP. It’s about $3.60 per month

Thanks for your reply Jeremy. However, my bill tells me that when my instances were in stopped status, ( I assume the only two Elastic IP were associated with my only Instances, as I only got two IPs) $0.005 per Elastic IP address not attached to a running instance per hour (prorated) kept counting hours and charged by hour.

So, as Alex suggested I have released all my Elastic IPs and use Public IPs at the moment. I will see whether this stops this type of charge in the next few days.

Hi Jeremy, consider using aws for both deep learning part 1 and part 2 in the coming year, which support plan of AWS should I use?

I am on my own without a team, so I don’t have people to split bill with me to use AWH service.

I wonder whether AWS developer support plan $29/month is enough for both parts of our deep learning course?

If I choose this developer plan, what should I do to avoid extra charge?

Daniel, you can go with basic support plan which is free. It allows you to submit requests on general guidance, particularly the limit increase which is one you probably need to issue at the start of the course. It does not include technical support, though.

Charging for technical support and AWS service like EC2 are separate lines in your bill.

Be aware that AWS also charges for EBS volumes associated with your instance even when the instance is stopped.

Be aware that AWS also charges for EBS volumes associated with your instance even when the instance is stopped.

Thank you so much Alex, I did noticed EBS keep counting and charging me even when my instances are in stopped status. so, is there a way to avoid this charge when instances are stopped?

If I understand you correctly about developer plan, the $29/mon is paid for support servies, I am not getting unlimited time usage of p2 or t2 during the month. I will still be charged for p2 $0.9, and t2.large $0.09 each hour, along with EBS charge even when instances are stopped. Is this what you mean?

Thank you so much for your help

The answer to the last question is yes.

You pay AWS for storing your data on EBS so the only way to stop charges is to delete EBS volume. But then you will lose all your data and setup - not a good option. All charges stop when you terminate (not stop) you instances, delete EBS volumes (may be deleted manually when instance is terminated - depends on your settings) and release Elastic IPs.

To sum up, AWS charges you

Thank you so much Alex, you are very precise and helpful!

if you use an elastic IP, and leave it associated with your instance, you don’t have to pay for it.

In AWS bill, it says

$0.005 per Elastic IP address not attached to a running instance per hour (prorated)

according to my bill, once I removed (or disassociated) all Elastic IP, and use Public IP as Alex suggested, $0.005 per Elastic IP address not attached to a running instance per hour (prorated) stopped counting.

However, EBS keeps counting and charging, at a much higher rate than Elastic IP at $0.1 per hour even when my instances are stopped.

Good point - I apologize my earlier comment was misleading. I forgot that stopping an instance means you pay for the elastic IP. Having said that, it’s only $3.60 per month, so maybe not worth worrying about too much!

I wonder how EBS volume is calculated.

Suppose my conditions are as follows: at the first day of a month

EBS volume is provisioned in advance when you run install_p2.sh script. Here is part of script

Thank you very much Alex,

Since we are suggested to have both p2.xlarge and t2.large at the same time and I believe it is wise to do so, then I wonder whether 128G is really necessary for me taking this deep learning course:

My Questions: (could @jeremy also have a look? thanks)

You could make your t2 much smaller. @vshets created a smaller instance and documented his approach - search his posts to see the details. It wasn’t as straightforward as just changing the size in the script, unfortunately.

It wasn’t as straightforward as just changing the size in the script, unfortunately.

Thanks Jeremy, I am looking into it to see whether I can make it in the end.

So, you still recommend p2.xlarge to be 128GB to be necessary for this course, right?

Happy New Year, and thank you again for this wonderful course you and Rachel created!