Video
Fastai v2 daily code walk-thrus
Fastai v2 chat
These notes are from @pnvijay - many thanks!

This was a live coding session. While it is a terrifying thing to do, live coding, it is also something that provides a lot of value as well. We will start by trying to understand what @Transform does and justify why it is needed. There has been 26 rewrites of the data transform function since the inception of fastai.

Let us define a function that returns a negative of a given number. 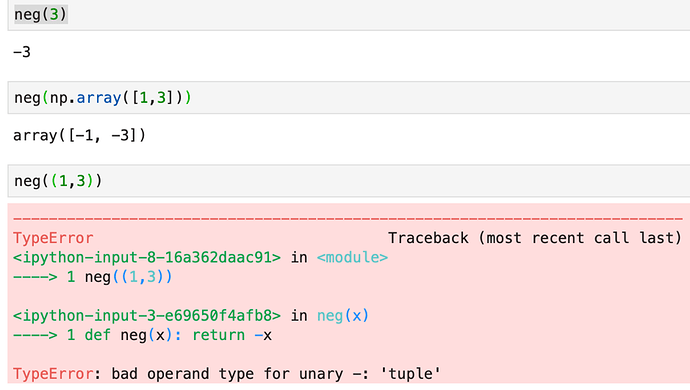 In data processing, we are interested in tuple or tuples as we have things like (image, label), (image, mask) and ((image,image),bool) etc. The last example of ((image,image),bool) was for Siamese dataset. In tabular format we have ((continuous columns, categorical coumns),target variable).

We can use decorators to add new behavior to python. When we add @Transform decorator to the neg(x) code, we can see the new behavior.

Let us now start working with actual images. Let’s us the MNIST Tiny dataset. We will choose one image and convert that into a tensor and sub-index into the same. 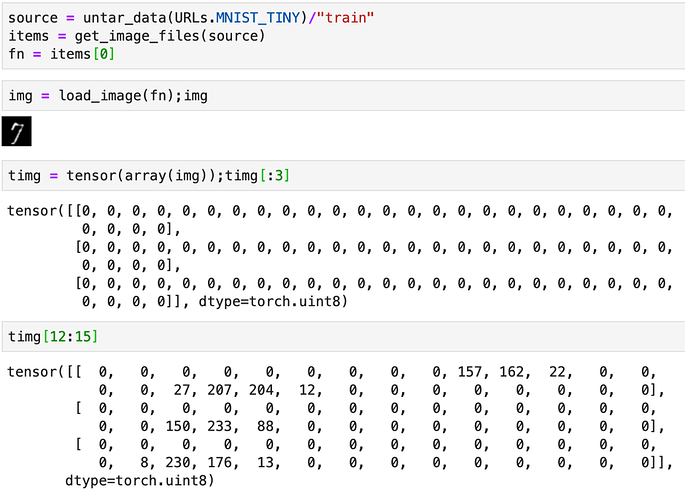 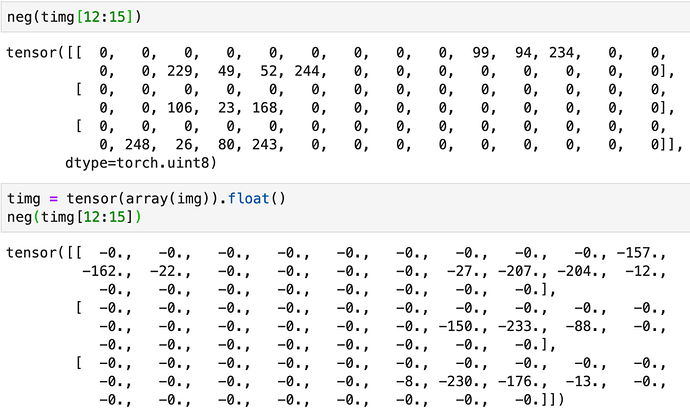 Let us define a normalization function to normalize the image. It takes in an image, mean of image and standard deviation of image. It returns the normalized image. Lets try this function on our sample image (timg) from the MNIST Tiny dataset that we had chosen before. 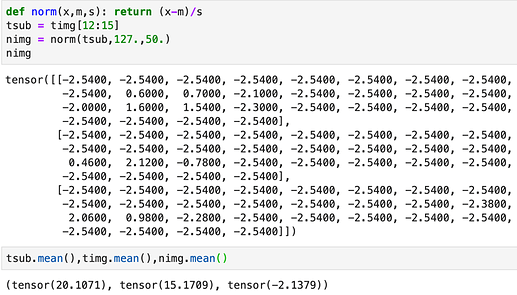 We want to do normalization in the GPU because it takes a lot of item in the CPU. But in the GPU it is not just an image it is usually a tuple which could consist of any of these options - (image, label), (image, mask), ((image,image),bool) and ((continuous columns, categorical coumns),target variable).

Let’s try a combination of image and label tuple and use the above defined norm function on the same. You will find that due to Python’s default behavior it doesn’t work but if we add the @Transform decorator to norm function it works. But in this it has normalized the label also whereas we want the normalization to apply only for the image.

Please note that while we normalize after adding the decorator, the mean and standard deviation must be explicitly declared as m = 127., s = 50… If it is not declared in this way the norm function will not work and throw an exception. 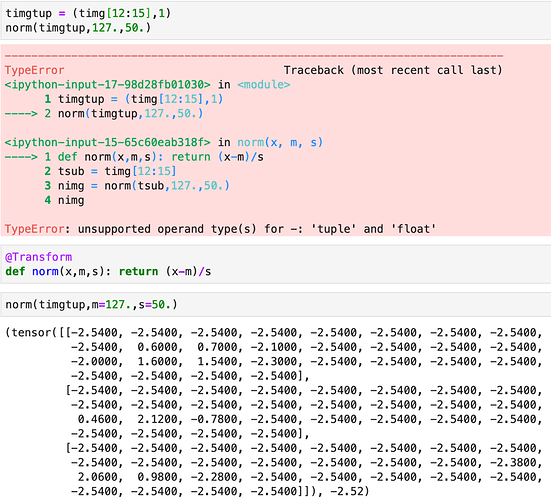 By the time a tuple like this comes to a data loader everything is a tensor. How can we differentiate between the different types of data in a tensor tuple? TensorBase is where the types can be kept for Tensors so that we can use the types of the various elements in the tensor tuple sent for processing in the GPU.

We will now declare timg to be a subclass of TensorBase , tweak the norm function to apply the normalization only on the image. As you can see below, now only the image gets normalized but not the label. 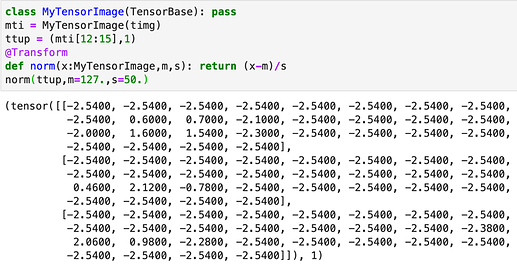 We don’t have to use the decorators if we don’t want to. Instead of using decorators, we can alternatively declare them as a subclass of Transform and achieve the same things as before including the partial function. 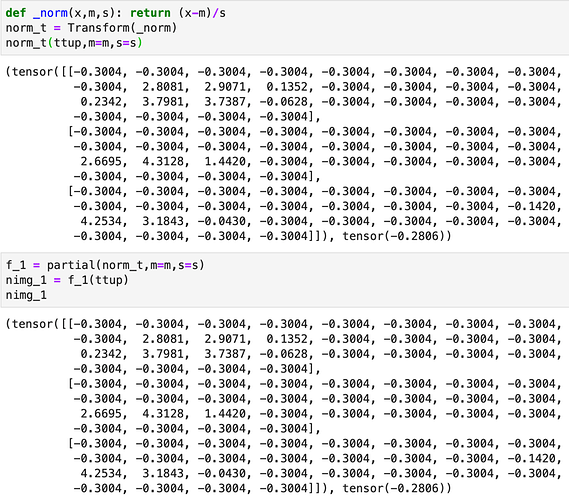 So we can write

or we can use store_attr to do the same thing.

The below shows the output for both the choice of usage. It is upto us to choose to use the convenience functions or not. 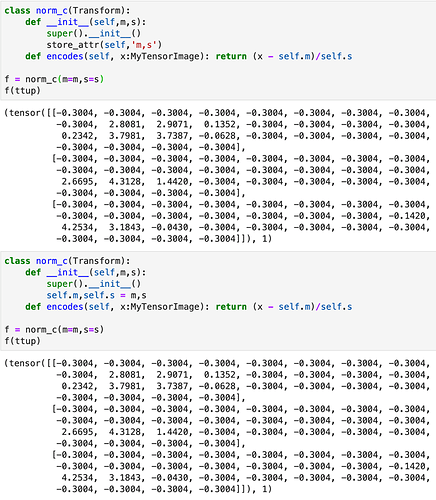 For multiple types of data we can define multiple encodes in the class. Also if there are many types that the data can belong to, it will take the closest or the most accurate match. As you can see in the example below, the data type MyTensorImage is the closest for the data and that option is chosen. 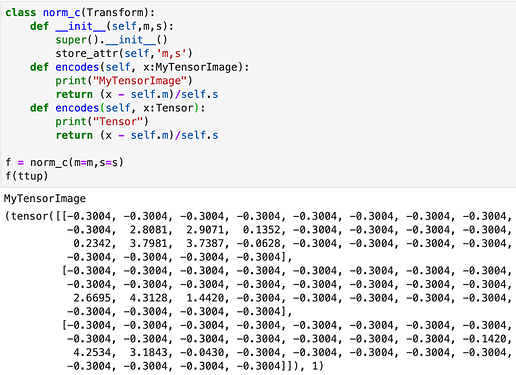 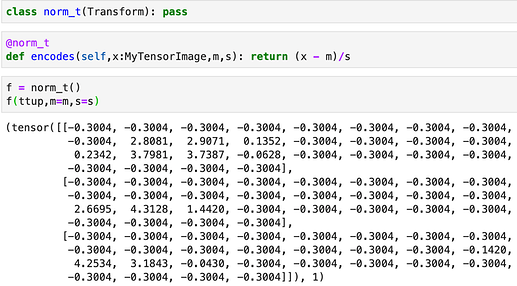 By this method, we can extend the functionality of the norm_t class to account for a data type like Audio, if we go onto define something like that later, and add a encodes function to the norm_t class.

Now we want to want to go in the opposite direction where we want to show the image and need to de-normalize the image. We can achieve that via the decode function. The decode function can be called from the Transform class or sub class. In a typical class definition for doing the decoding, we will add an decodes function that will be called by the decode of the Transform class or sub class. 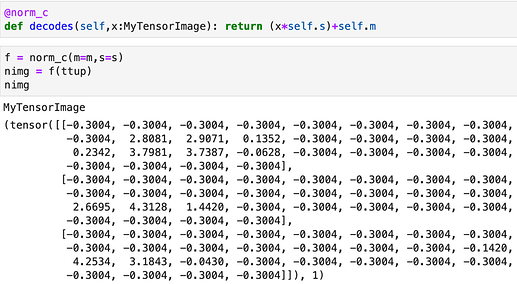 We can run the decode on the normalized image and retrieve the original image as shown here. 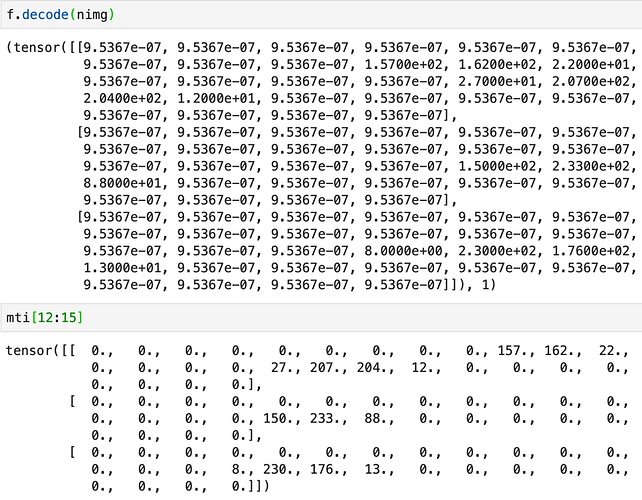 Usually transforms are not just limited to one. We will add other transforms like flip to the image. A simple way to combine these two functions – normalize and flip – one after the other.

We can also combine transformations like normalization and flipping together. A typical way to do that is to use the compose function. 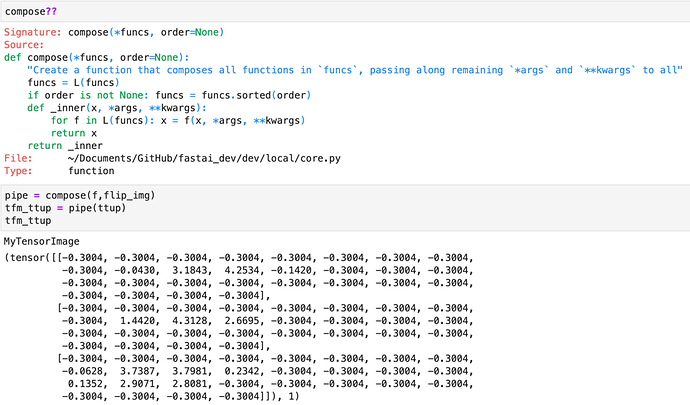 But with the compose approach we will not be able to call the decode function collectively on pipe. We will have to call it individually. 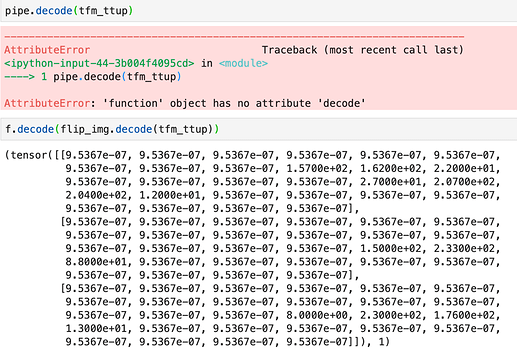 We can use the Pipeline to be able to use both the encodes and the decode method collectively. 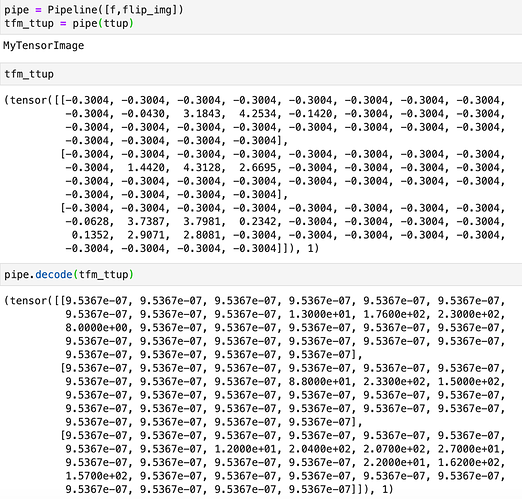 We are using normal python functions to dispatch and use it for data processing functions. We don’t have to define MyTensorImage like we did here in the note book. It is already available as TensorImage’ in fastai v2. We also haveInt` type as well here in fastai v2.

Let us try to use the load_image() as a transform. We will define a function create_image_tensor() to load image and convert it into a tensor. We will add @Transform decorator to add the Transform functionality. But the type of the image is still a Tensor.

We can directly create a TensorImage type directly. There are two ways of doing it which is explained below.

You don’t have to learn anything about TypeDispatch() or metaclass. Just understanding what things like Transform does is enough. But in the code walkthrough we take time to go through all these things.

In Transform and Pipeline we pass an argument as_item=False which allows us to do the operations on each element of a tuple or list. This is what we saw in the walkthrough now. But if we use as_item=True it will turn this functionality off.

The reason for having the as_item argument in Transform is that it goes through the functions and sets their as_item to be that of what has been passed in the initiation. The reason is that in data processing sometimes we want tuple behavior and sometimes item behavior.

I found the answer to the question about using a Union type as a parameter constraint. Instead of using Union[A,B] you simply use (A,B) has your type. There’s an example in nb 02:

Do you have it in any format other than PDF? Maybe we can auto-convert it. I think it would be really helpful to have it here - as an external attachment it can’t be searched, and isn’t as easy to read.

I have it as a word doc and have the notebook as well which I recreated from scratch. Will any or both of them help. Else I will start paste them with all modifications here. Let me know.

Yes you can export the notebook as markdown directly in Jupyter. You can convert your Word doc to markdown either using Pandoc locally or online with https://word2md.com/ . You can copy and paste the images into the topic as you create it, or upload them all at once with the upload button on the top of the forum edit window (all the images will be in a single folder after conversion).

Int inherits from ShowTitle and int - could I please ask why do we need a show method on an integer?
Is this used when we display an image with a title?

could I please ask why do we need a show method on an integer?

You don’t necessarily. But if you do want to display an integer, then this is the class you’d use!

E.g. perhaps your dependent variable in a tabular model is an int.

Got it, thank you!

When you pass a random transform to Pipeline, how does decode return the original object? AFAIK the random state is not stored anywhere.

Random transforms are not decoded - since generally you want to actually show the augmented images etc, not the original ones.

Ok, thanks!
I misunderstood then. So the purpose of decode is to return an object that can be shown, not necessarily the original object. That makes sense.

Is it a custom type defined in pytorch or is it a type that is defined in fastai? I tried to look into the source code but I am unable to find the definition of this type.

Is it a custom type defined in pytorch or is it a type that is defined in fastai? I tried to look into the source code but I am unable to find the definition of this type.