Attempt to use the new fastai 1.0 for dogscats lesson

I tried to replicate the old lesson1 dogscats with the new fastai 1.0 as a warm up exercise.

I got weird NaN and cannot train my model properly, I did tried training the MNIST dataset and it’s perfectly fine, I am not sure what’s wrong here.

If i use the sample dogscats data, I even got a error like this complaining about the OneCycleScheduler
ZeroDivisionError: division by zero

Have you tried the one under examples/dogs_cats.ipynb

Not yet, I missed that directory, will have a look tonight, thank you.

I see the example is updated, but I still get NaN even just running the example…

@nok Are you running from the github repo or the pip/conda install? I would personally suggest using the fastai package from conda or pip as that will be the most stable version since the repo is under active development and could contain bugs. (install instructions here: https://github.com/fastai/fastai#conda-install) 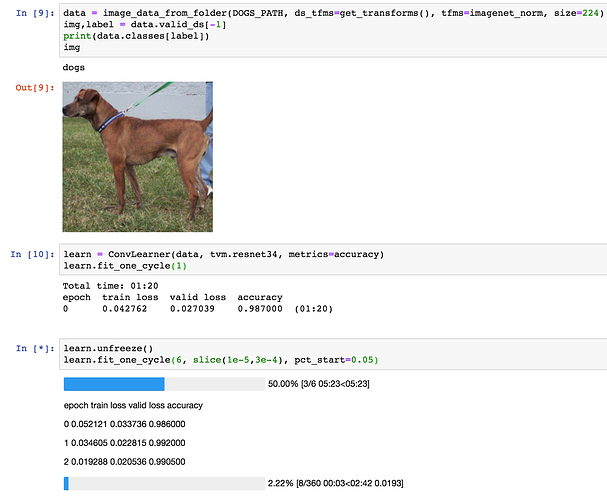 @jamesrequa I run from the github repo, the thing is the examples notebook was changed as well.
for example, the data is now
data = ImageDataBunch.from_folder(path, ds_tfms=get_transforms(), tfms=imagenet_norm, size=224)

So you are suggesting using the pip fastai package and remove the symlink?

So you are suggesting using the pip fastai package and remove the symlink?

Yeah if you are using the pip or conda install, you don’t need a symlink, the import statements will take care of it. Just create a new notebook separate from the repo so it won’t pull from that.

Yeah those were the changes I was referring to. My guess is everything will be working great by the time class starts

But in the meantime, I just used image_data_from_folder since ImageDataBunch wasn’t included in the install package yet (as of fastai v1.0.5 when I last checked).

I try git checkout tag 1.0.5 and remove the symlink, I make sure the fastai.version is 1.0.5 as well, I still get NaN though. If you read the thread below, it seems that it was cause by one of the transformation, but I cannot go deeper to debug effective for now as I am not familiar with the source yet…

Seems like the issue comes from GCP since it only happens there. Jeremy has told them so that we can sort this thing out.

@nok ah ok, in that case sorry I wasn’t aware of that issue. Are you using GCP? Or what platform are you using? Can you provide all of your hardware & OS specs?

Heads-up. The upcoming fastai version 1.0.7 (currently Work In Progress) will break this API:

All vision models are now in the models module, including torchvision models (where tested and supported). So use models instead of tvm now.

hi jeremy ,i get the problem of NaN loss.
I use Siam Network (dense121) for hump back whale competition and on version 1.39 .
FYI i use GCP .
What could be reason for NaN loss ?

In one forum i read max light has that issue ,so i zeroed it now checking if i still get the issue