I created a TextLMDataBunch object from a dataframe, as you can see in the picture. Why aren’t all beginning of sentences marked as “xxbos maj”? For example in the output of show_batch, we have “xxmaj yyy in the xxmaj riverside area”. It seems to me that xxbos is used to indicate the beginning of the text in “ref” cell of df, not the beginning of every sentence of every text. Same happens when I create a TextClasDataBunch. How can I change that?

I assumed that xxbos marks beginning of sentence, but it seems to mark beginning of text and it does so for both the language model data (my example before) and the input to the classifier (attached image). I presume the reason for indicating beginning of text is to account for linguistic phenomena like pronominalization.
The actual beginning of sentence is identified by “. xxmaj”.
I see you can turn off that tag in include_bos with TextDataBunch.from_df.
I guess I answered by own question really:-) 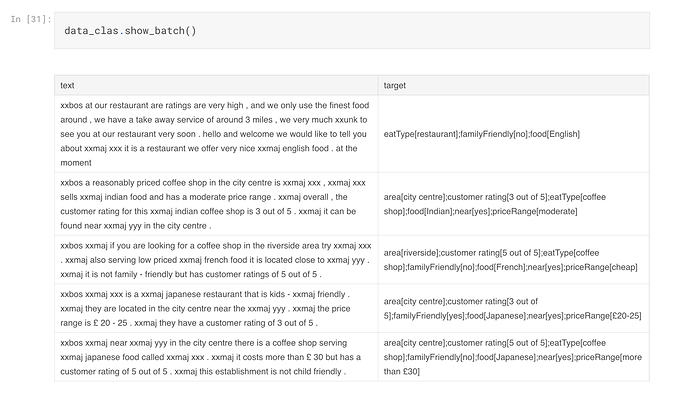 But I found the docs says what these special tokens mean:

Yes, hence my surprise at the outputs of show_batch where BOS does not seem to indicate beginning of sentence. Or should the input be formatted on sentence per row in the dataframe? Am I missing something?

It marks a boundary between items in your data so that the model can learn that it should start a new sequence rather than continuing the previous sequence.

Items get smushed together when training a language model so letting the model know where one item ends and another begins is important.

How can we remove these tags in Fast AI v2?