Windows setup with CUDA for real 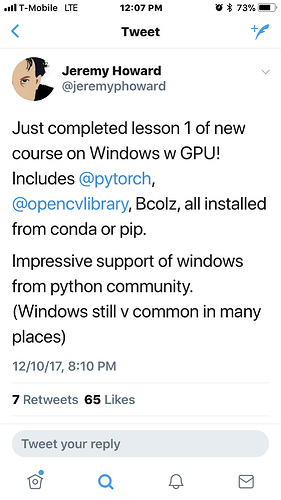 But bcolz was failing to install and compile
At home I have Ubuntu but in my office I only have Windows PCs.
Do you have a script to follow?

@gerardo I could feel your pain. I had problems to install bcolz before (see discussion below/ Personal DL box).

@jeremy When I started running the notebooks, I came crossed “cannot find module bcolz”. So, I installed bcolz individually. However, I got an error message saying bcolz was installed. I removed everything and reinstalled the whole repo by using download zip file from GitHub instead of git clone. However, no improvement. I found others discussing similar problem in Paperspace few days ago. But, no solution in the forums. Any idea? In the meantime, I will use AWS.

Eventually, I did the following together with conda env update and conda update --all (but which was not recommended) every time I retried. Hope this help.

Did you guys have to install and configure anything else for pytorch to utilize the GPU on Windows?

I installed the CUDA SDK, although I’m not sure it’s necessary. I also installed cudnn, which I think is important for good performance.

Are there instructions available for doing this on Windows?

I’m looking at blogs that have you install Visual Studio first, etc… Just wondering how painful this is

I don’t think you need Visual Studio. Try installing it without installing anything else and see if it works!

have you tried using the windows 10 linux subsystem?is there any reason for using the cmd more than the fact that its a windows box?

This is real pytorch working on Windows 10 Directly.

Wow. This is great news. To be honest I’ve had a really hard time following the course because I couldn’t get my system to dual boot Windows 10 + Ubuntu (I currently have a Windows 10 DL box, which I share with my daughter - so removing Windows is totally out of the questions

). At some point I used the FastAI AMI on AWS, but it still bugged me that I couldn’t use it locally.

Any links/guides on how to have pytorch run natively on Windows 10 with CUDA support?

Trying lesson 1 now, after doing a git pull and also installing Pytorch for CUDA 8, with the following command:

When I run the learn.fit(0.01, 3) I get an error where it is expecting a float but getting an integer (below). Yet you have run sucessfully but on CUDA 9 - could this be anything to do with a CUDA version?

An image of the the entire trace: 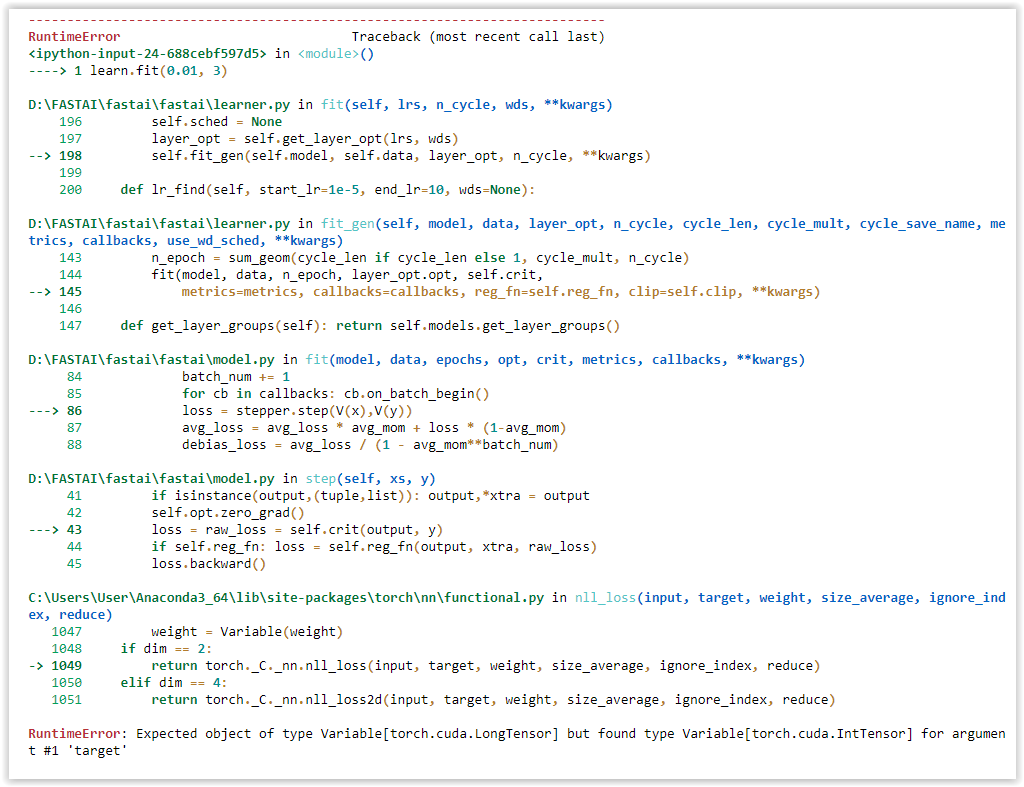 When I run the learn.fit(0.01, 3) I get an error where it is expecting a float but getting an integer (below). Yet you have run sucessfully but on CUDA 9 - could this be anything to do with a CUDA version?

Yeah it does have a difference in how it handles int32 vs int64 for some reason. I hacked in something to force it in int64 to make it run but I don’t have a general solution. Someone needs to change DataLoader to always make int32->LongTensor, I think, to fix this properly. Or maybe in dataset.py.

Unless you have quite a bit of time on your hands, you probably don’t want to be the person figuring all this out - best to stick with Linux until a few people have gone thru the course in Windows and cleaned it up!

Might be not relevant to this thread but just asking…

Is there any way in which we can get hold of the Keras version of fastai library or if someone can share a link where we can download the same?

Actually I wanted to try out previous lecture series NBS …

OK, thanks @jeremy - I will take your advice

However, I can upgrade my CUDA, although I am unsure if that will break anything else such as Tensorflow - do you have any issues with other libraries under CUDA 9?

I’ve updated instructions at Windows 10 Installation Notes The thread seems to be locked because I can’t update with latest updates. Regardless, Windows + GPU seems to be working well. Windows Ubuntu shell isn’t GPU compatible and takes 20x longer to complete.

I also had the bcolz error. This post fixed it for me:

I managed to overcome this, here’s what I found: bcolz isn’t being imported due to some obscure jupyter kernel error. Fixed by running this command (with the appropriate conda env. already activated): jupyter kernelspec install-self --user apparently this command is deprecated, but it woked for me… theano will give you import errors due to an environment variable not set. You need to permanently set the environment variable like so: sudo nano /etc/environment (add line: MKL_THREADING_L…