I’m trying to implement WGAN with a gradient penalty, and I need some help picking through the way loss calculation is structured.

In the GANLoss module, the loss calculation for the critic is defined as:

The loss for the generator is defined as:

So the generator receives output, images generated by the generator, and target, example images. The critic loss receives real_pred, the result of passing real images through the critic, and input, a set of latent vectors used to generate fake images.

I feel like this happens in the forward pass of the model, but right now this is only defined in the GANModule class as:

I don’t know what *args are or where they come from. Does anyone know where the calculation happens, or how to get the target variable from the generator loss passed to the discriminator loss?

In the fastai library, we use NoopLoss for the generator loss and WassersteinLoss for the critic.

In the WGAN paper, they list the following algorithm: 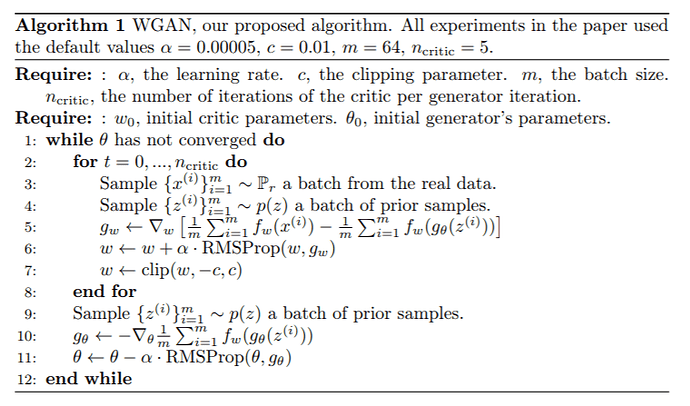 Edit: I see in the gradient update for the critic they add the gradient term in the update instead of subtracting. Does this mean everything is flipped?

In the WGAN-GP paper, they use another variant: 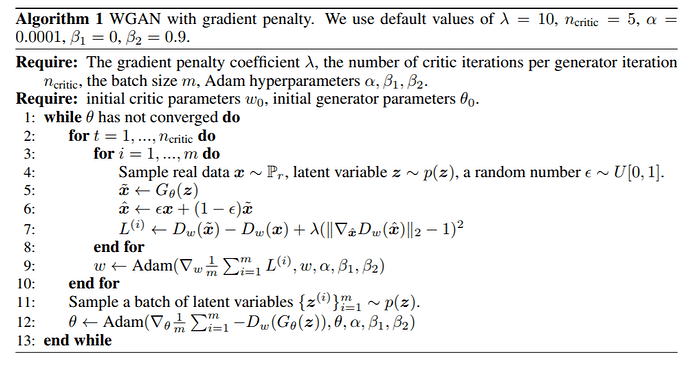 Does anyone have perspective on the different loss variants and the implications of them for the optimization process?

Edit: I see in the gradient update for the critic they add the gradient term in the update instead of subtracting. Does this mean everything is flipped?

Yes, they flipped their update which I thought wasn’t very natural. Hence the other way round in fastai.

For your other question, I think you’ll probably need to write your custom GANTrainer for this.

I am not (yet) familiar with Wasserstein-GANs, but there is a very well made depthfirstlearning.com curriculum on WGANs which maybe can help you.

(For general GAN training I can highly recommend the NIPS 2016 Tutorial on GANs by Ian Goodfellow as a starting point, especially the part around figure 16 on p. 26 and chapter 4 starting at p. 30.)

But if these loss functions are minimized, don’t they encourage the critic to output 0 for real images and 1 for fake images? In fact, the original WGAN paper proposed to maximize the WassersteinLoss, hence the + sign in the gradient update.

I was confused by this. Can you please explain to me if I’m wrong?

You are correct, and I’m confused about the same thing. Other implementations do it the opposite of fastai (both losses are flipped).

It seems that the Wasserstein distance is symmetric though, so I guess the two are equivalent.