TypeError: 'NoneType' object is not iterable at lesson 2 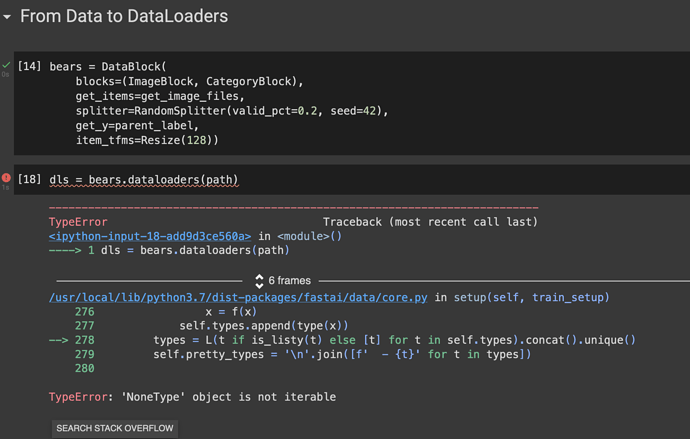 Thanks for the information

'nonetype ’ object is not iterable occurs when you try to iterate any objects or variable having or assigned “None” value.

Yes, I get that. But I just followed the fastai notebook. Why would this happen? I kind of solved it by not using the Azure api and instead using duckduckgo image search api but that doesn’t explain why this error happens. Did I not download the images correctly?

It may be worth to check whether you have images in the folder where path is pointing.
You can do something like [f for f in path.iterdir() if f.is_file()] or [f for f in Path(path).iterdir() if f.is_file()] to get the list of files in the folder. (which code works will depend on what path is: a string or a pathlib Path.
If there are not images, of if path is not a proper path, then it means there was problem higher in the loading of images.

I had the same issue and the solution was an incomplete creation of the bears folder, just delete the folder and rerun the cell blocks to create them properly.

What I think caused this was when I was first running this I was fairly anxious about being charged for api usage on azure, so I stopped it part way through to make sure I wouldn’t, and it created the bears folder, and the grizzly subfolder, but missing teddy and black. However running the cells again never properly remade it or added the other 2 folders and was returning a non type, super weird, took me like a week to notice after I was comparing running it in a fresh environment just by chance and noticed that the folders where off and looking through the files presuming the error came from the code block above the error containing mkdir.