I’m trying to add the get_movie_recs function from the 00_movie_recommender.ipynb to the index.ipynb file so it shows up on the README.

"NameError: name 'nn' is not defined"

I’ve tried adding torch to the ‘requirements’ in settings.ini to no avail. How can I get index.ipynb to recognize the ‘nn’ from nn.CosineSimilarity?

Any help would be greatly appreciated.

Very strange, how about

Thanks for the idea, but it didn’t work. I added :

to both .ipynb files and it still will not run on the index. I can copy and paste the whole function into the index notebook, but that seems to defeat the purpose right?

If not could pip install it

so fastai apparently already needs torch to be loaded which is why nn.Cosin… works in the movie_recommender.ipynb file. I tried your pip install but this(below) happpend and it still throws the error: 'nn' is not defined 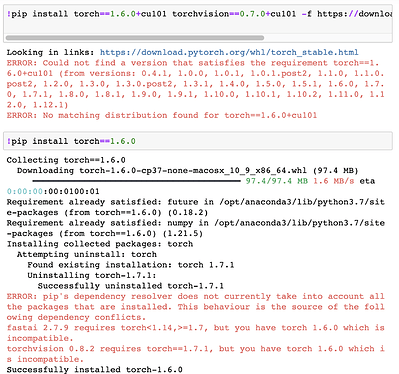 "NameError: name 'nn' is not defined"

Could you try importing torch & torch.nn as below?

@daveramseymusic Hey, you are not exporting your imports. In particular, when you check movie-recommender/movie-recommender.py you can see that it doesnt import anything, so it can not know of nn. Add #| export to the top of

and it should solve your problem

Edit: Great project btw, it picked my movie for tonight

Glad to hear about the movie too. I’m about to load a larger 20mil reviews version in an hour.

Is it possible to import the learn object with the get_movie_recs() function?

In order to get the function to run simply on in the gradio block I must add learn=learn in the function parameters.

This is the error:

I’ve even saved the object into the index.ipynb notebook before the import to no avail using :

Is there a better way to approach this? Ideally, I wouldn’t have redundant code in the index.ipynb just to show the function in the README.

Update: I fixed the error: “name ‘learn’ is not defined” by adding #| export to the learn=load_learner(path/'movie_predictor_large20mil_639.pkl') cell.

In case this is useful for anyone else:

I was having difficulty running nbdev_prepare because the README was not in the nbs directory.

I fixed it using this code where I loaded the learn and titles:

I wrote here about how to work with repo-relative paths, you might find it helpful:

How to use nbdev for non library ML pipeline? nbdev

I’m excited about nbdev’s potential for ML pipelines. Some tips that might also be helpful as well… Repo-relative paths in notebooks and modules nbdev’s config system has built-in support for this: >>> from nbdev.config import get_config >>> get_config().config_path Path('/Users/seem/code/nbdev/data') # depends on your repo location Config.config_path is always an absolute path to your repo root. To avoid repeating yourself you ca…