SSH into your AWS instance?

http://wiki.fast.ai/index.php/Github says to “SSH into your AWS instance”. How does one do that?

Thanks. I pasted that into Terminal, and this is what it said:

Am I doing something wrong?

Have you gone through the AWS setup lesson? You should have set up your ssh credentials for your aws instance in that lesson

After you’ve done that you can also get aws-alias.sh from the github repo and use that to ssh into your instance

So someone from the original class had the same error:

Hello! I set up p2.xlarge instance at AWS on Windows 7. This instance was fine for the first time when I set up, but I cannot access again. I turned on p2.xlarge instance at AWS website and typed the following command in Cygwin, seen from the screenshot. When I tried SSH, I get an error message: Connection timed out. [image] I followed the AWS website document to try to solve. I am currently stuck at step 4 and 5, because I cannot find "Inbound Rules tab" and "Outbound Rules tab". Where are …

The answer was just to make sure you’re instance is running (might even take a minute or two for ssh to be up and running):

@analytics20132333 The “connection timed out” message typically shows up when your instance is not running. After you set up your instance, you need to start it. If you’ve downloaded and sourced our aws_alias.sh file, you can run: aws-get-p2 aws-start

Hi - Have you checked that $instanceUrl is populated? can you try:

It should give you your instance’s ip address. You can go to the EC2 console and confirm that it is correct.

Hello,
I’m facing a similar issue here, unable to connect to the p2 instance through ssh. I’ve made sure the instance is running, went through the forum for possible solutions, ensured ip address is same, tried terminating and starting properly a quite a few times (released all resources as mentioned n wiki). I’ve been through aws troubleshooting pages to make sure the inbound rules, route table etc are ok. I’m using the scripts from git (https://github.com/fastai/courses/tree/master/setup). able to start and stop instance (using aws-alias.sh)from bash, but cant ping/ssh!! any suggestion that would possibly lead to a fix would be great help. could it be some issue with my laptop (Windows 7)? can’t connect to the instance via browser as well. 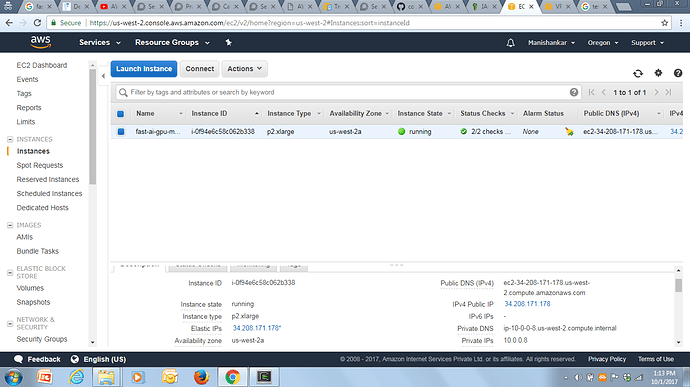 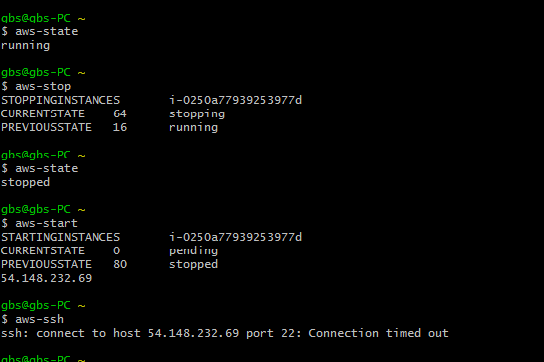 a.) using the ip address instead

b.) tried with firewalls turned off?

c.) try: https://www.infobyip.com/sshservertest.php to see if it’s the instance or your computer

UPDATE: I just tried to ssh to your 54.x.x.x instance and it works for me. Definitely a firewall issue.

Hi Sid,
figured out that my ISP (BSNL India) has blocked port 22 access to servers, hence the issue. tested that I’m able to ssh using a different ISP.
oh! and, I’d terminated my t2 xlarge with the ip 54.148.232.69. so when you managed to ssh, it was probably with someone else. Thanks for the help

Any idea if we could ssh using a different port? if port 22 is the only way to go, I might have to consider switching my ISP and the process takes at least more than a week I believe.

You definitely can but you’ll need another connection (maybe using your cell phone data? or friend’s internet) to do the following:

You can also try using docker-machine - makes it very easy to start up and connect to new AWS instances.

Restart the instance fixed this issues

Here’s a good guide on getting a Jupyter Notebook running on AWS and SSHing to it. Found it helpful when other port confusion issue fixes weren’t working.

Simple Guide on How to Connect to Jupyter Notebook Server on AWS EC2 from Your...

The only thing to do with good advice is to pass it on. It is never of any use to oneself – Oscar Wilde