From the video about neural translation (attached screenshot below), in the forward pass of the decoder, why is the output decoder hidden state reinjected after each iteration instead of only using encoder hidden state? And it would even harm the learning, because then the decoder wouldn’t be decoding the encoder anymore but decoding its own output?

From what I understand. the loop is being using because nn.rnn cannot use the output at cell N for input at N+1. Ideally, we’d do the above loop in one forward pass, where enc hidden state is used and then predictions are chained to subsequent decoder unit’s input. Is this right? 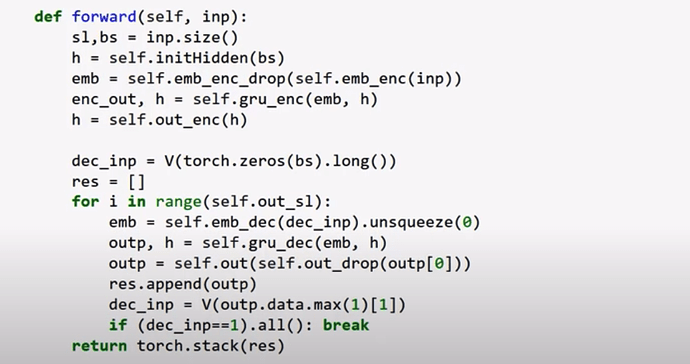 The loss is calculated after the whole batch is processed, but it is calculated for the entire sequence. The error signal is then backpropagated through all time steps to change your weights in a way that would improve the model’s prediction at each time step, not just the last one.