Hi @jeremy, and any others who can assist!

I am trying to see if I can get the Windows version of Pytorch running, so far yes I can - but I have encountered a strange behaviour when running texts_from_folders in the fast.ai library.

Even though my default python encoding (using sys.getdefaultencoding() and sys.getfilesystemencoding()) is utf-8, for some reason (I believe its because I am in the Windows environment), when the call to texts.append(open(fpath).read()) in that function runs I get an encoding error.

Since the function doesn’t specify encoding, the system goes to fetch its default encoding - which is at this point uses the standard Windows unicode encoding of cp1252 instead of the required utf-8.

So I get this error: 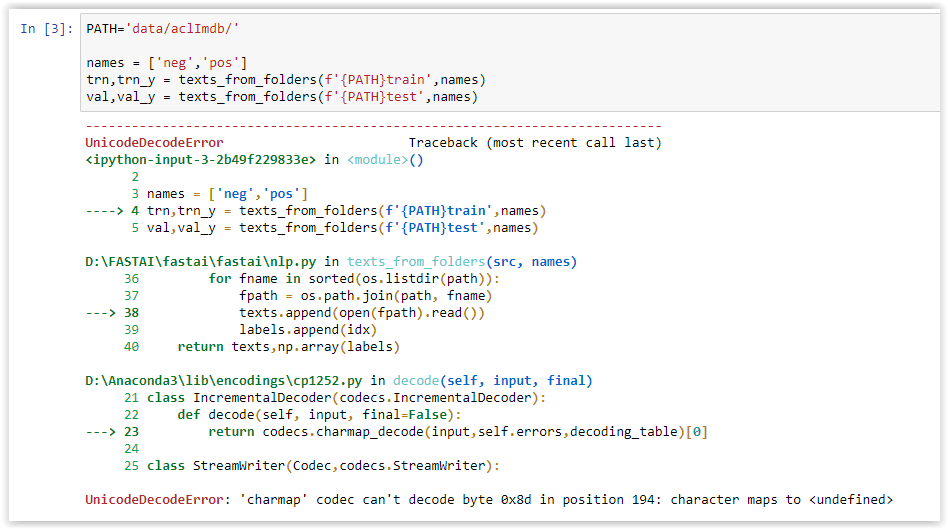 To test this I made a local version of texts_from_folders and specified the encoding as utf-8 (see below), and now it correctly loads. Short of getting another parameter for the fast.ai function so we can pass in encoding (which BTW I think would be a good idea), is there any way I can force the open() function to use utf-8 by some sort of system setting?

I have read many blogs about this but nobody seems to have quite nailed it - there are conversations about re-instating a missing sys.setdefaultencoding() but even if I was to do this I’m not sure it would be helpful - as my default is utf-8, it just misbehaves at the point of using the open() function…