Hey @atul.
Short answer: it was renamed to config_from_instance.sh
Long answer: I’m just in the process of refactoring this, writing a blog post about it, and putting it in the wiki. Until then, you can refer to this medium post: https://medium.com/slavv/learning-machine-learning-on-the-cheap-persistent-aws-spot-instances-668e7294b6d8

@slavivanov - Thx. I’m going to give it a try. Looks a bit intimidating to begin with. :-/

I think the reason it looks intimidating is that I might have overdone it with the fine details (wanted it to be as clear as possible).

I’m getting errors as below:

@atul it seems like your aws cli installation doesn’t support aws ec2 wait spot-instance-request-fulfilled which is very weird. Can you try to upgrade it?
Also even though it displayed an error your Spot instance should have been launched.

@slavivanov – Hmmm I updated the awscli, and tried again.

See attached images: When I logged into Console.AWS, I see an error for the Spot Instance that was being created, but failed: The error: (see image attached) 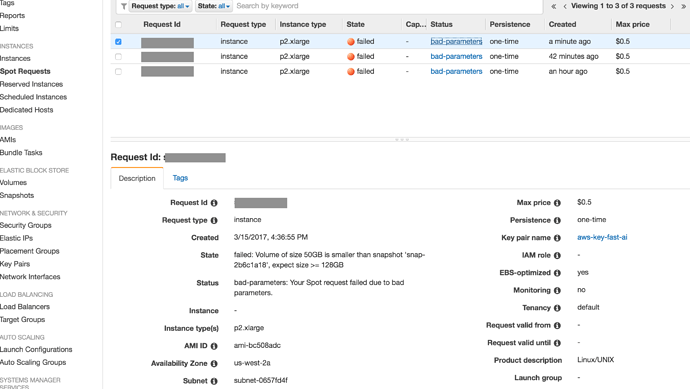 Your script failed again, but with this new error:

@slavivanov – OK, made some progress… though I dont know how much.

Then, using Step 3.1 from your Medium post, I ran the sh ec2-spotter/fast_ai/config_from_instance.sh. That gave an error below:

So - it managed to stop/terminate the currently running spot instance, but failed at something else?

So net-net - I’m not sure how to proceed from here.

Thanks again for your help so far.

Hey @atul, thanks for letting me know about the 128GB limit. I’ve updated the code to reflect this.
For your second question: The fast.ai ami does not include the notebooks code. I believe this is because they change frequently. Just get them by running: git clone https://github.com/fastai/courses
As for the third problem, the instance was probably not named properly. This might have been caused the initial script having issues. Can you verify in the AWS console that you have an instance named fast-ai-gpu-machine? Alternative approach would be to pass an instance id to the config_from_instance.sh like so:
sh config_from_instance.sh --instance_id i-0fd47cabf6cd8d534
Make sure you download the latest code off github first.

@slavivanov Thx - I got the new ec2_spotter scripts from git. The instance started… BUT looks like it had old info.
(FYI - I previously used Jeremy’s script to create a non-spot instance of p2.xlarge due to all the frustrations with this ec2_spotter). So ssh was not connecting to the newly created Spot instance complaining with “Remote Host Identification change”)

@atul If you connect to the instance before the swap is complete, and then after the swap, ssh will give that error. This will fix it:

A blog that is unlike the Linux man pages - it actually explains the scenarios to use each command/app.

@slavivanov - At this juncture - I honestly dont know if my setup at AWS is OK or not to run ec2_spotter.
The ami instance I created with Jeremey’s setup_p2.sh script is terminated (by the ec2_spotter’s config_from_instance.sh) . I also killed/terminated the spot instances that start_spot.sh had started, bcos of SSH problem. (Yes, I can remove that offending entry from the .ssh_hosts…)

…But I’m wondering if I should re-do the whole thing. If I were to re-do, where would one start? From Step 1.3?
I’m assuming I can reuse the security group/subnet I had created earlier.

@atul Sorry this is taking so long, it gets easier down the line

You should have a good looking my.conf so you can just try sh fast_ai/start_spot.sh and see what happens. If it doesnt work, start with part 1.3 and then jump to 3.1

Hi @slazien –
I am getting the same error that you got with nvidia-smi.

How did you fix it? Thanks

Hey! Did you see the message “dpkg was interrupted, you must manually run ‘sudo dpkg --configure -a’ to correct the problem.”? You could try doing what is says, that’s how I fixed it. I think the problem was that dpkg was still configuring some packages while I terminated a spot instance, with that corrupted package info transferring onto the new spot instance. If you start a new spot, let it run for a couple of minutes, just ro make sure.

Just came across your post and looking forward to trying it. I have been developing something for the same purpose using docker containers on a non-boot volume. I created a separate post for this:

I have created an alternative approach to giving persistence to AWS spot instances. Have simplified to one line of code to create a server with a persistent volume; and one line of code to terminate it and save all the data and programs to a snapshot. Both data and programs are persisted on a non-boot drive using a docker container; rather than the boot drive as per the @slavivanov solution. You can pip install then download and run an example notebook from here: https://github.com/simo…

How did you find working with AWS? I found it rather painful!

@slazien - Thx for your note.

Did you run Jeremy’s install_gpu.sh script to update all the packages for Nvidia?
Or did you run something else?
Thx

No, I didn’t run that or anything else. Just sudo dpkg --configure -a and it worked.

Just noticed the wiki page and the blog post, great job and thanks again!
As a side note, I suspect the spot price bidding in my region went from the boring $0.2 to $0.6-0.9 because so many people are using your script suddenly

No complain though, I think it’s great that anyone can take advantage of this technologies. For me, I just switch the instance type to g2.2xlarge whenever I need to for smaller jobs. I really like the flexibility in your approach. So thank you again!

Hey @slazien - I’m still running into the same issue - could you detail a little bit more how you solved it? I went through the spot instance setup, and everything seems to work, except when I boot into the spot instance, I get the same error from nvidia-smi.

Setting up aws on Cygwin, I keep getting this error:
$ aws
C:\Users\bella\Anaconda2\python.exe: can’t open file ‘/cygdrive/c/Users/bella/Anaconda2/Scripts/aws’: [Errno 2] No such file or directory

I couldn’t find the threads to resolve this issue. What shall I do?