When I attempt to go through the Lesson2 notebook, I run into a memory issue at the following line:

In an attempt to address the issue, I have done the following:

After restarting the Lesson2 notebook, I downloaded htop (an interactive process viewer) on my instance in order to look at all of the running processes and memory usage. Initially, the Memory usage was fairly low; however, by the time I get to the following lines:

my memory usage is at 55.2GB/60GB. No other cells in the notebook are running at the time I check the memory usage.

Here’s some information on my instance:

Here’s a screenshot of the processes running by the time I get to the load_array: 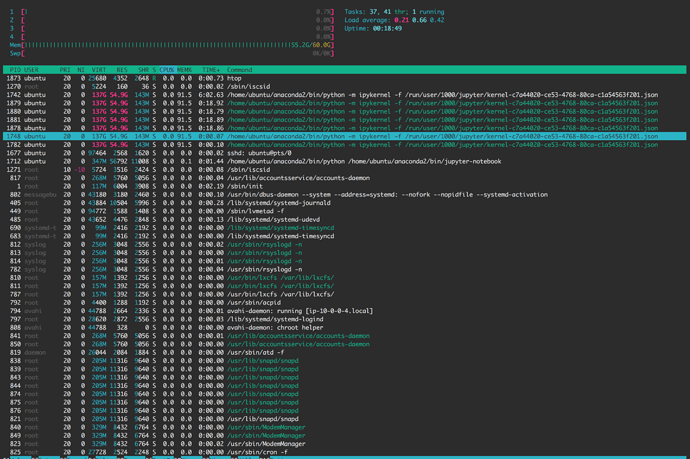 I hope I’ve given enough information

Has anyone else run into this problem? Any ideas on ways to get around the memory issue?

What are trn_data.shape and val_data.shape? What if you split the cell in two, so you first do val_data, and then do trn_data? Does saving just val_data work (since it’s quite a bit smaller)? 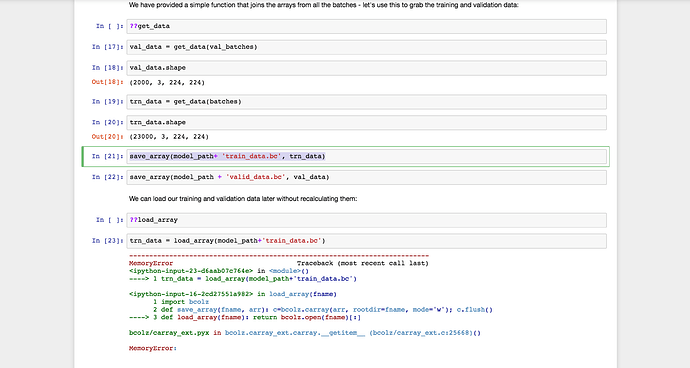 So, it does seem as if just saving the val_data would work. However, I’m not sure why I’m running into this issue and apparently others are not – do other people have greater memory?

I have the same issue on a P2 instance. But, I’m not worried about it since we already have the training data and validation data arrays loaded into memory at this point in the notebook. No need to reload them again (unless, of course, you restart your notebook and want to continue where you left off). If you want, you can add del trn_data and del val_data before the load_array() calls. That’ll free up the memory occupied by those variables before loading them back up from the saved data.