To continue the documentation of our development of the library, here is where we’re at in terms of optimizer, training loop and callbacks (all in the notebook 004).

With a very good idea that I stole from @mcskinner, the optimizer is now wrapped inside a class called HPOptimizer. The four hyper-parameters mostly used are properties of this HPOptimizer named lr, mom, wd and beta, and each has its custom setter that will actually put the value in the right place of the internal optimizer param dictionary.

For the end user, you create this HPOtimizer by passing model parameters, an opt_fn (like in fastai) and a initial lr like this:

Then you can access or change any of those hyper-parameters by typing opt.lr = 1e-2, which is far more convenient than in fastai.

This doesn’t support differential learning rates yet, but that will be an easy change once we have decided how to represent the different groups of layer, we’ll just have to adapt the setter for lr (and wd if we want) to handle it.

In the current fastai library, the training loop has progressively become a huge mess. This is because each time someone has added something new to the library that affects training, they added a few more lines (or extra arguments) to the training loop. So when a beginner now looks at what is the core of training, he can’t see the important steps. And on the other side, each of those additions (like the training API, half-precision training, swa or stuff specific to the LMs) have bits of code in several places which also make them difficult to understand.

For fastai_v1, we have decided to be more pedagogic, and the training loop won’t move from its version in notebook 004:

If you skip all those annoying calls to this cb_handler object, you have the simple training loop:

So why add all those lines with cb_handler? Well since we don’t want to change the training loop to leave it clear and simple, we have to code all the things that affect this training loop or use information inside it elsewhere. That’s why there is a callback function between every line of the fit function: to code what should go between those lines in a different object.

The guideline to add a new functionality that goes with training in the fastai_v1 library will be to do it entirely in a Callback. This will also help clarity since the code for a given piece to add will all be in one place. To do that, callbacks have access to everything that is happening inside the training loop, can interrupt an epoch or the training at any time and can modify everything (even the data or the optimizer). Just look at the example called EyeOfSauron to see how it’s possible.

As examples for now, you can see how the LRFinder is completely implemented inside a callback (just missing the save the model at the beginning and the load at the end but that’s an easy add once those functions exist), or a 1cycle schedule.

Do you think we’ll be able to incorporate true weight decay into the HPOptimizer directly, so that stuff like wd annealing works with either Adam or AdamW without dupe code? Or do you have some other plan for AdamW?

@jeremy you could probably put a toggle in the HPOptimizer constructor, and then do a simple dispatch under the hood in the getters and setters.

For both of you: what your your thoughts on preventing bad interactions? Putting new features into callbacks instead of the training loop itself makes a lot of sense for modularity, but it also hides a lot of potential bugs in order-dependent interactions.

Those are more likely now that the callbacks can manipulate so much of the training loop, e.g. trying to do multiple things to xb and yb for each batch. Ordering becomes important, and might not even be the same across callback hooks. If we modify the data twice for on_batch_begin it seems plausible that we’d want to modify the output with on_loss_begin in the reverse order to unwind those transforms before loss calculations.

Yes, the weight decay update can be done inside the optimizer, since it has the models parameters. It’s also probably best since when mixed-precision comes along, doing the weight decay step is probably something we want in FP32.

I’m not too concerned about bad interactions as there are very few callbacks that will actually need to change the input/output/loss. The only two I can think of are half-precision training and regularization functions for RNNs. In any case we will be very careful when accepting PRs with new callbacks that make changes like this, and yes it’s obvious order will matter, especially with the half-precision training callback coming along.

Remember the end user won’t see the callbacks too much though, and the functions of the fastai library will order them for him in the order he needs it (the only situation I see this become a problem is half-precision training mixed with RNNs, which is something that isn’t working properly in fastai now anyway).

Meanwhile, works quite nice in my everyday tasks.

For the on_epoch_begin and on_epoch_end methods, what do you think about passing the epoch number as the first argument? Sure, you can implement something in the callback itself to increment every time one of those methods is called, but if you have a couple callbacks that want that functionality, and you already have the epoch variable in the loop, it might be helpful to just pass it in. The Keras callback API does it that way.

From my experience, the best solution is to pass frozen (no new keys during training loop) key-value storage to callback with all necessary statistics.

Good point, as is @scitator response too. Will play along with the CallbackHandler keeping tracks of all statistics and giving them as **kwargs to the callbacks, that way any of the callbacks will be able to unpack the bits needed (epoch, batch number, iteration number, last loss, last output, last input, last target…) whenever required (and not just necessarily at on_epoch_begin for instance, if we’re talking about the epoch number).

In any case we will be very careful when accepting PRs

What about unit tests? Are you considering it?

Pushed a new version that allows you to access anything stored in the CallbackHandler state_dict, as long as you know its name. Hope that helps!

I love the callbacks and I don’t know if any of these ideas are any good but I’ll throw them out there. My apologies if these are “out of left field”.

Also, it seems to me, and I could be wrong, that going through the entire validation phase, if the accuracy or whatever metric you are using isn’t close to what you are trying to obtain, is a waste of time. So, it seems like it would be nice to be able stop the validation phase prematurely just like we now can do with the training phase. For example, if you are trying to obtain 98% or higher accuracy but after a few validation batches you are at 88% accuracy, you probably aren’t going to get to 98% during this validation phase and time would be better spent going on to the next training epoch.

Lastly, in the spirit of keeping the training loop as simple as possible, it doesn’t seem correct to add the metrics like accuracy into the training loop but should be handled by callbacks just like everything else.

Here are my suggested changes:

I’ve created a sample update with these proposed suggestion to the 004 notebook which can be found at [https://github.com/sjchoice/fai/blob/master/004_callbacks.ipynb], however I haven’t been able to run these changes as I’m having difficulty upgrading to Python 3.7 and it seems that their is dependency on dataclasses which seems to be a 3.7 addition, so excuse me if the Python code isn’t 100% accurate. I’m still learning my way around Python (I’m a Java/C++/Swift dev.)

Here are also some screenshots of the proposed ideas. 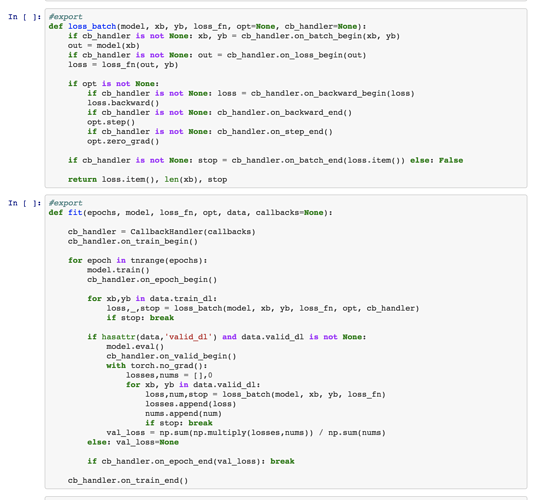 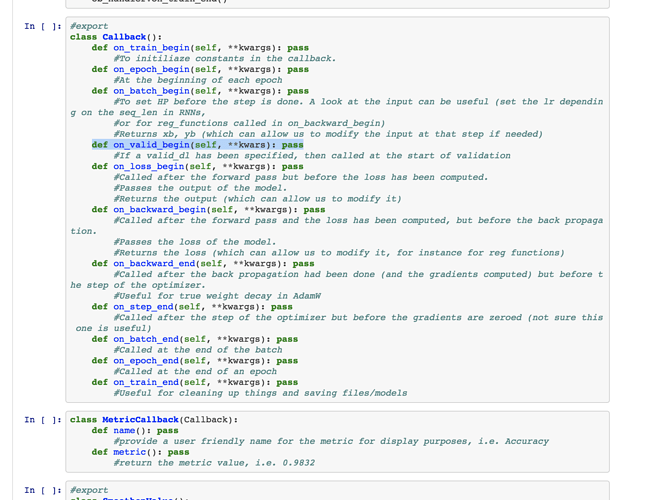 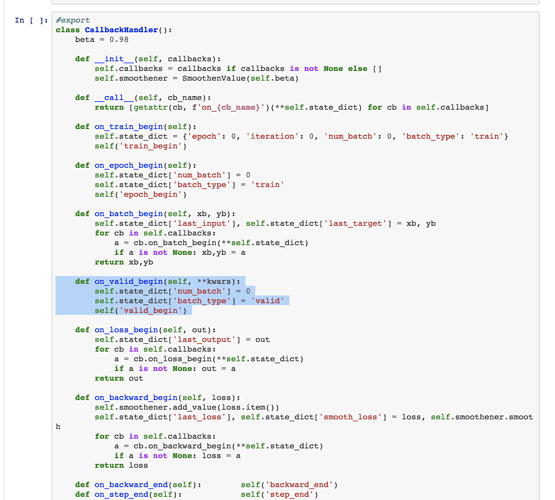 Hi Stephen, thanks a lot for all those ideas! Even if I’m going to argue against most of them, we share the developing process with the community to get your advice and see how to make things better, so please keep them coming.

Last thing! You can have dataclasses in python 3.6, there is a library for it (called dataclasses).

Hope that explains a bit my choices. @jeremy I would love to have your thoughts on this too.

I figured it most likely these had all been considered but it’s great to know all the reasoning and how they are being done in other ways like the validation progress. Thanks for the detailed explanation!

What about unit tests? Are you considering it?

I played around a little bit with the new Callbacks and holoviews. So here’s a Callback for live updating curves about lr, losses, momentum and val_losses. 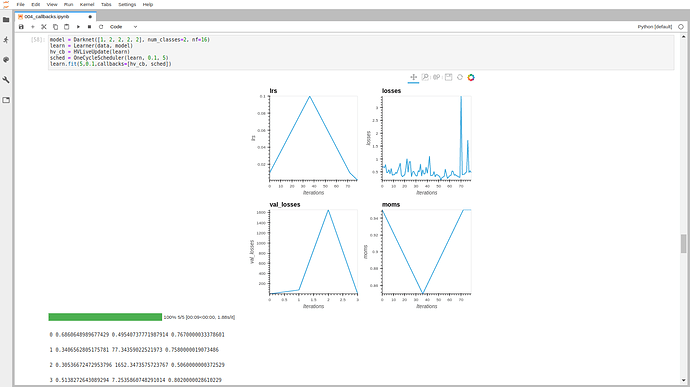 Hi,
I really like that new callback api, but now I have some thoughts/questions:

So just some thoughts I’d like to hear some opinions.
Thanks

Here are my thoughts:

Thanks for your fast answer. So the picture I have in mind for a sampler is like this: 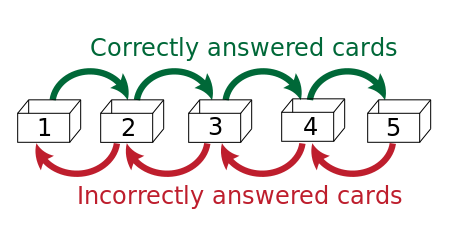 The higher the box number the lower the probability the image gets loaded. If you get additional training data, put it in one of the boxes.
Sure it could overfit, so one should be careful with prob. of “box 5”

Anyway it is nice that this is probably doable with what you’ve written.
So thanks again.

@sgugger, not sure if you are the right person to inform but in running the 004_callbacks notebook the CallbackHandler has the number of epochs as “n_epochs” for on_train_begin, but the OneCycleScheduler has the parameter as “epochs”, resulting in 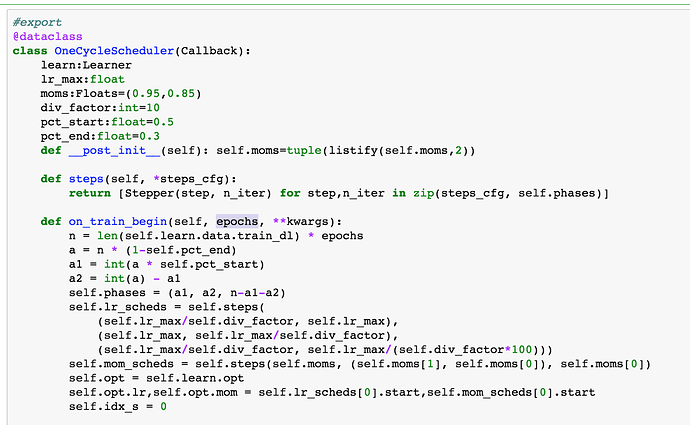 Oopsie, forgot to change that there. Thanks for telling me!