Moving inference to the CPU

I’ve trained a model using fast.ai v1. I now want to deploy the model and run predictions but only on CPU.

I’ve tried the following which is taken from this topic. The code looks like:

When I attempt to obtain a prediction:

I get the following error:

RuntimeError: Expected object of backend CPU but got backend CUDA for argument #3 ‘index’

Any idea how to resolve the error?

You model is on the CPU but your data is automatically on the GPU, that’s why you have this error. Either don’t put the model on the CPU or change the default device to default.device = torch.device('cpu').

Perfect! that did the trick thanks!

Are you sure you are using the latest version?

Yes, it’s the latest release, and defaults.device should work (if you don’t import * you will have to import defaults manually from its module).

You are right that defaults.device works but not (at least with my configuration) fastai.defaults.device as written in the notebook lesson2-download.ipynb.

See below my tests: 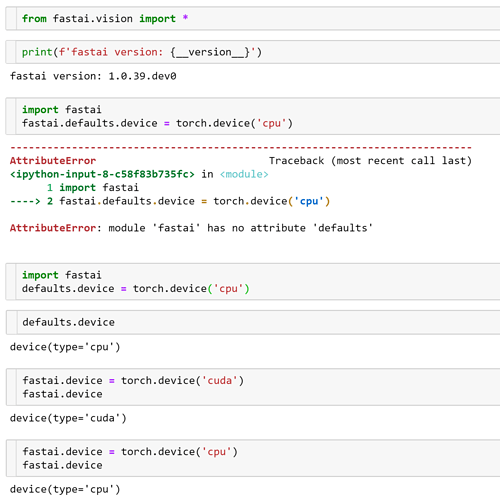 @sgugger, maybe a late one, but worth checking.

Regarding the inference of CPU, I have observed that half of the number CPU is using for batch preparation and the rest of half is always using for actual matrix calculation to get the predictions? Is anyway I can split usage of CPUs not half-half? I tried num_workers, but it seems do not have any impact?

This could be set after my model has being loaded and trained in GPU?

This could be set after my model has being loaded and trained in GPU?

Hello,
Very good question, do you have the answer ?

Very good question, do you have the answer ?

fastai looks at the DataLoader for the device to use. (And then adjusted the device the model is on)

Note: this is for fastai v2

I have a last question.
On my computer I have a good GPU (NVIDIA GeForce GTX 1060 6GB), and I use my computer to create and test my model.

Or I need to create my model without GPU ?

I think I can create the model with my GPU, and when I use it I add this line :
defaults.device = torch.device(‘cpu’)
…
preds = learn_inf.predict(img)