I started reading the paper by Leslie Smith on tuning hyper-parameters (which I believe was the inspiration for lr_find), and I was struck by the idea of comparing multiple runs of lr_find with different settings of other hyper-parameters. I ginned up a tool to let me do that (link above), and got this plot (note it is zoomed in to focus on the inflection points): 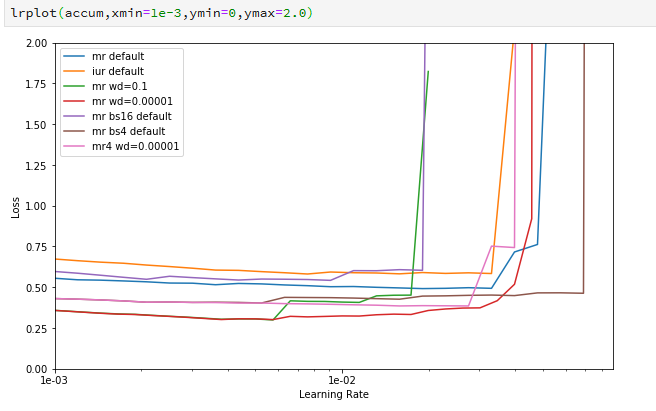 In this figure I can see some variation in how much learning happened, and where the learning rate gets too great, across several variations of weight decay and batch size. But how significant are these variations? How much variation is to be expected just by the randomness of the process?

So I tried a different experiment: redo the same lr_find 10 times, on the same model but different data selected at random. Here’s the code and the resulting plot : 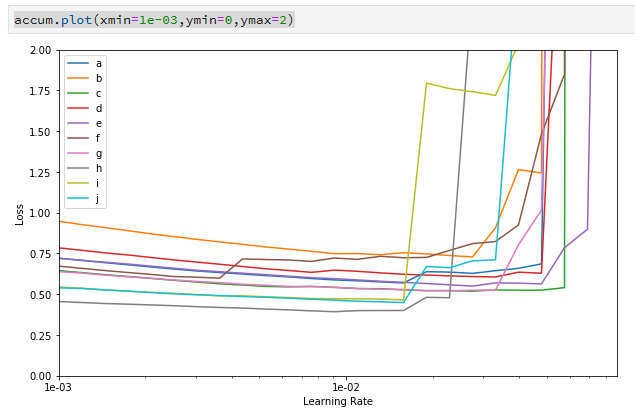 (Side note: I have a lot of custom code for building my models and datasets, but hopefully the loop is pretty comprehensible anyway, and none of the custom stuff should affect the results.)

The conclusion from the plot is pretty clear: the variation in the second chart is easily as great as the first. So I don’t think I can conclude anything about the different hyper-parameters from the first graph. Moreover, the data you get from a single run of lr_find (at least with my model and data) has a span of about an order of magnitude when showing you the turning point in the learning rate.

Then I redid the same experiment above, but with a much longer/slower lr_find process (setting num_it=1000). Here is the output of that experiment: 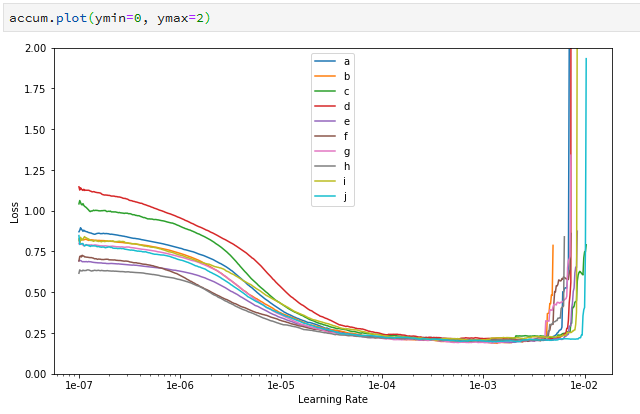 In this case I’m showing the entire x range rather than focusing just on the inflection points. There are a couple of interesting observations from this graph, compared with the previous ones:

What do other folks think — what is your experience with using lr_find?

(FWIW: the problem space I’m looking at is multi-class segmentation with multispectral Landsat data. The code is in my repo here, but I haven’t come up with a good way to publish/share the data yet.)