While I was studying lesson 8 again, I noticed that while trying to study the code and Implement a different equation of Frobenius Norm I come across an issue where the fastai’s version and the one I implemented does not come even close to equalling the same number. What did I do wrong?

Also while I’m here, i’m a bit curious what the \sigma^2 is supposed to be in the final implication of this equation 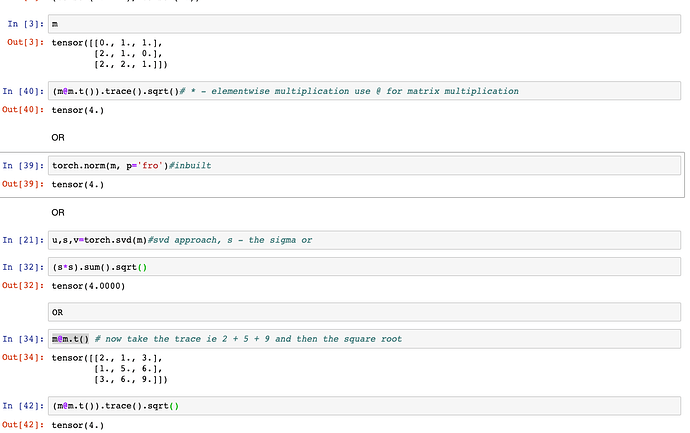 Screen Shot 2019-08-21 at 1.04.13 PM.png1094×687 49.9 KB
s, sigma is a diagonal matrix with non-negative real numbers on the diagonal. They are the singular values of matrix m when you take the svd of m.
[https://en.wikipedia.org/wiki/Singular_value_decomposition] (svd)
so for fastaiFrobeniusNorm it is elementwise (*)
and frobeniusNorm the svd way you need to do a matrix multiplication(@)
2 Likes
JordanGarcia (Jordan Garcia) August 21, 2019, 9:07pm #3

Thank you for reaching back and going beyond!
Last question, did i misread the wiki , because it did not tell me at all that i was supposed to take the transpose. It did on wolfromalpha though

I think that is an error(Not sure let me check ). This is the derivation-

Haha that is not an error the * is not multiplication it is the conjugate transpose. If you notice carefully the * is not in the centre of the line (to indicate multiplication) but in fact is slightly to the top. Would have been better to have it written as AA*.

The Frobenius norm of a matrix is the square root of the sum of the squares of its elements; it provides a rough measure of the “size” of the matrix.

Wikipedia gives three ways of expressing the Frobenius norm of a matrix whose elements are real numbers:

Here, the superscript ^{T} refers to the transpose matrix, and the singular values \sigma_{i}(A) are the square roots of the eigenvalues of the matrix A A^T

The third expression is the square root of the sum of the eigenvalues of A A^T; although mathematically interesting, it’s not the best way to compute the Frobenius norm.

Let’s demonstrate the equality of the 1st and 2nd expressions. Suppose A is an n\times m matrix, i.e. A has n rows and m columns.

The diagonal elements of A^{T} A are evidently the set of dot products of each column of A with itself.

which is just the sum of the squares of all the elements of A.

It’s interesting to note that the order of the terms in the product of the matrix with its transpose doesn’t matter, giving rise to an alternate form for the Frobenius norm:

\operatorname{trace}\left( A^{T}A \right) is the sum of the m dot products of the n\times1 column vectors of A with themselves, while \operatorname{trace}\left(A A^{T} \right) is the sum of the n dot products of the m\times1 row vectors of A with themselves. The expressions are equivalent because each reduces to the sum of the squares of the elements of the matrix A. Their computational complexity is O(mn), which is lower than that of the singular value decomposition required to compute \sigma.