Great documentation @stas! Many thanks.

So now you can do:

Great documentation @stas! Many thanks.

Thank you for the questions!

No, you don’t need to inject learn.purge() between training cycles of the same setup:

The subsequent invocations of the training function do not consume more GPU RAM. Remember, when you train you just change the numbers in the nodes, but all the memory that is required for those numbers has already been allocated.

This one has nothing to do with learn, you’re just saving data.

not at the moment - it shouldn’t by default because most likely you will want to keep the allocations for the next function, but it could be instrumented to optionally do so.

no, that’s it’s the counterpart of data.save.

The data save/load is totally new out of @sgugger mint house and is still needing to be documented.

Good thinking - I’ve been thinking about this one too, need to discuss this one with @sgugger.

Really what we need is is learn.destroy so that it’ll be like learn.purge, but will not re-load anything and turn learn into an empty shell. and so we won’t need to gc.collect(), as it won’t be taking up any memory.

As you can see load_learner() returns a new one and doesn’t use the old one, so it’s really about your q8 above. i.e. how do we efficiently and concisely destroy the old learn object - since assigning to it will not do the right thing (the old object will still linger untill gc.collect() arrives)

So now you can do:

no, this just clears the exception object and allows for the temporary variables to be freed up. But it’s possible that there are still some nuances to work out there wrt to memory reclamation - more experimentation is needed.

If you encounter some situations where this is not doing what you think it should let us know. But also remember not to use nvidia-smi as a monitor - since it will not always show you the real situation - it has to do with pytoch caching - sometimes the allocator decides to free a huge chunk of memory from its cache, sometimes it holds it, as therefore nvidia-smi output is a not a good tool in this situation - so either call torch.cuda.empty_cache or use ipyexperiments when you experiment.

because I don’t know what you plan on doing with the learn object next, so that was just an example of a typical end of training with a given setup, perhaps next you will not do inference… but I’m open to suggestions to make it less confusing - perhaps just a note that this is just an example.

I’m also seeing some problems with learn.purge, so it might take a bit of time for everything we have discussed so far to be so. I will go write some tests to make sure that eventually it’ll be so.

Until now (and before you do more experiments), I keep in mind 5 things from your great documentation:

The last one we are still sorting out, I’m pitching for learn.destroy for that situation. Until then del learn; gc.collect() will give you back more memory at the moment.

In order to reclaim GPU memory or after a “CUDA out of memory exception”, the following code is equivalent?

Correct and it is so in both cases only assuming there are no other vars that refer to learn.

learn.destroy is almost ready, you can try:

but it’s not @sgugger approved yet.

no need for del, None, gc.collect()

I’ve updated my summary with a fifth point about learn=None; gc.collect().

Pretty much. It leaves a hollow learn shell, which takes close to zero memory, so even if you don’t reassign to it later, it doesn’t matter. destroy() pretty much resets it to {}, but keeps its methods, which I guess could be deleted too. most likely that’s what should be done. otherwise it’d be misleading - still having its methods intact but no internal data to work with. So it will most likely be slightly different in the final version.

In the Human Numbers notebook, where we are exploring the validation set tokens, I think: x1[:,0] and y1[:,0] should be x1[0] and y1[0] In the video for the lesson (around 1 hour, 48 minutes), Jeremy is showing the x1[:,0] notation and getting the results/output that you would expect to get from x1[0]. I don’t know why/how?? The rest of the notebook in the repo is using the x1[0] format to explore the text of the validation set.

I agree, this needs to be fixed.

The in-class example of “Human Numbers” is a very helpful example for how to encode and operate on language-like vocabularies.
However, I am having difficulty envisioning how to apply fastai’s RNN structure to a continuous variable. For instance, imagine wanting to predict a store’s sales using historical performance (ala the Rossman’s problem from Lesson 6) but using an RNN instead of tabular data.

Does anyone have a worked example (ideally on Kaggle) that I could walk through to get a better understanding of RNN on a continuous variable?

In the “superres-gan” example, I am unable to train the discriminator/generator pair using learn.fit(40,lr). The pretraining of both networks worked fine, but when I try to fit the pretrained model I get a nonspecific error. I’ve copied the full stack-trace below.

This seems to be an issue with training GANs in general, I encounter the same error when attempting to fit the learner in the “wgan” example

When attempting to train the “2a” model in the “superres” example, I’m getting a CUDA out of memory error. I tried halving the batch size, from 32 down to 16, but am still getting the error.

Strangely, the error only shows up on the second epoch of training (it gets through the first epoch just fine, and prints the results), which makes me think that it is caching data between loops that it shouldn’t be. The error message says 1.49 GiB cached which seems like a lot…

Has anyone else encountered a similar issue and figured out how to fix it?

Have you tried decreasing your image size? Gans in general eat up a ton of GPU memory, and while I didn’t have issues with running the notebooks, I did have issues with using Gans in a personal project of mine that I’m currently working on (based off the superres notebook). Playing with both batch size and image resolution helped with finding that “sweet spot” for training where I don’t get OOM errors.

What is the correct order for BatchNorm and ReLU layers.

I’m trying to run the GAN example with a different dataset. However I get this output: 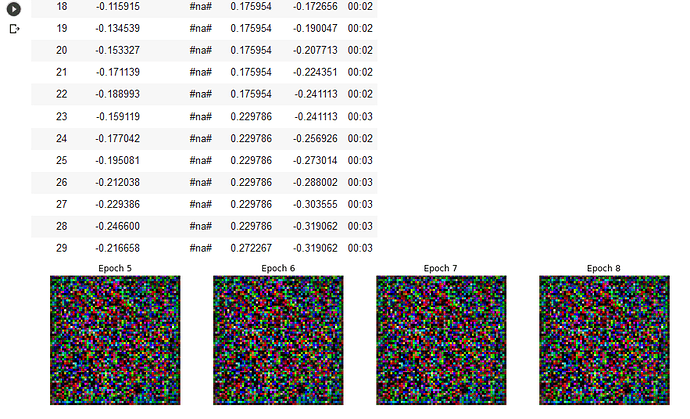 Hello! I have a little bit confusion about kernels, filters and convolutions. I understand that one black-wight digit image in MNIST data set has size 1x28x28 and 1 is because of the channel.,because we have gray scale. RGB images have 3 channels(red,green,blue).
But I can not understand in 13.34 minute of lesson 7 where we have the model when we say that we have 8 channels and we pick it because we just want to be 8!!!What we mean by this? These are 8 filters? Do they help us to predict the final outcom? And how is it combined with this 1 channel that is about the grayscale color? Is it the same process that we do with kernels? I would appreciate any help, thank you!

kernels and filters in the context of convolutional nets are exactly the same thing (they are synonyms),

If you think in filters, channels, etc without the whole context you can become severely confused. What we are defining with a line of code like:

is a convolutional layer which include data (like the channels) and operations, (like instructions in how the kernel must operate in the input channels to produce the output channels for the next layer)

Do they help us to predict the final outcome?

hell yea!!!, filters and channels are the heroes in convolutional networks, without them we can’t predict anything. Indeed a convolutional layer are nothing more than a stack of N filtered images (N channels) and the set of instructions to produce them (the kernel + its stride, padding etc )

And how is it combined with this 1 channel that is about the grayscale color? Is it the same process that we do with kernels?

Short answer:
one channel in (the gray scale image), 8 channels out (feature maps). 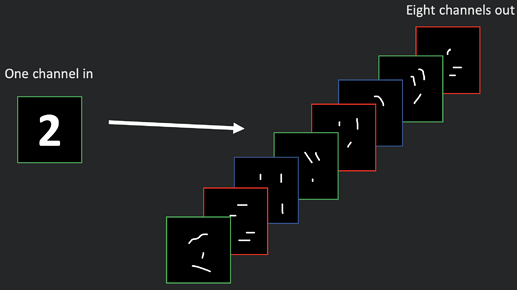 Each of the 8 channels is a different version of the filtered image (the kernel or filter, scan the image from left to right doing a mathematical operation (called convolution) to produce a new version of the original image, a new channel). So a channel is also an image.

Remember, an image ( channel) can be represented as an array of numbers (and each number represents the pixel intensity of the given channel), The training process adjust these numbers (pixel intensities) in each of the channels to find the best ones that helps us to decrease the loss function.

Maybe you want to check some additional resources on internet that help you to build a more solid knowledge about how convolutional networks works. Believe me, having a full and clear understanding in what you are doing, will pay good dividends in the long run and additionally, everything will become suddenly even more interesting and fun when you start building new and cool things by your own on.

Thank you very much for your time and your response!All my confusion I think it was arround the term of channel, filter(kernel) and feature maps. I made a clear sum up from also other papers and different sources in internet and now I feel much better

Also your answer was very clear. Thank you

Thanks also for the advice, good luck too!

Hi I attempted the superres-gan code with my own input data.
The aim was to see if I could achieve deblurring with the same method.
However the output I obtained from fitting the GAN is odd - some of the loss is not displayed (or I suspect not computed). More specifically, while I should be obtaining train_loss, valid_loss, gen_loss and disc_loss, I’m missing 2 columns of data, and it appears the time is displayed under the gen_loss column.

Could there be any reason why? 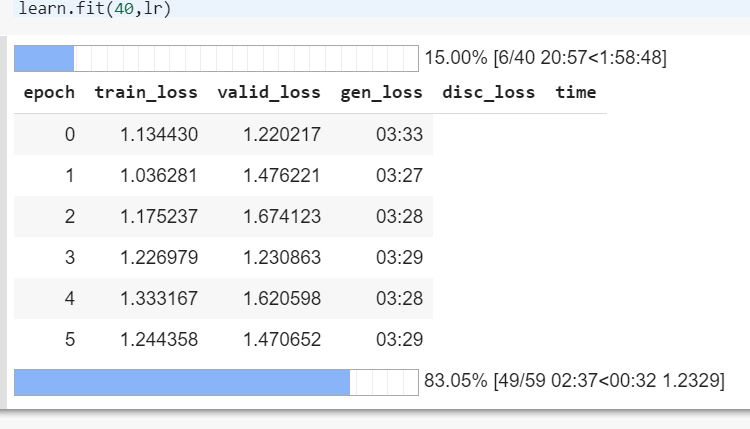 no gen_loss or disc_loss.PNG750×429 15.6 KB
For reference, I am using the GOPRO_Large dataset and the images are split by those that are blurred and those that are sharp.
← previous page next page →