How do I just view the current error rate of my model without having to train it? I would assume that I can access the accuracy or error rate as an attribute of the learner but can’t seem to find anything in the docs. Typing learn. and hitting tab doesn’t give me any attribute or method to view these metrics either.

same here, did you find a way round the 99% issue? It’s stuck there for quite a while.

So to clean the noise in the validation dataset we run

What confuses me is that when we run
losses,idxs = interp.top_losses()
and use the idxs to clean the training data aren’t we using the index of data in validatation with top losses in training data?.. Can anyone help?.

It is better to use “other” image sample as close as possible to what images you would expect in production. If the app is designed to recognized fruit, then it would be best to have images of other fruit as “other” images. Since irrelevant or blank images are not so useful for the algorithm to be able to discriminate apple and orange features.

probably you need to drop more?

If i understand your question correctly, you want to learn how to add a custom head to an existing backbone? I can help you with that but I think we will be covering that in the upcoming lectures in more details.

As for the supported archs, if you are trying to use Inception-v3 or similar, I think the library already supports it, if not, you can simply go into developer mode and push code from https://github.com/fastai/fastai/tree/master/old/fastai/models to utilize all the other variants. But, I suggest you proceed with caution as these models are old implementations and might not gel in well the new lib.

That’s weird, I can’t reproduce that bug. Can you share a bit more of your code?

I’ve rerun lesson 1 without any alterations to the code and seem to have had the same issue. I’ve pulled the last version of fastai just before doing this as well so I’m unsure why I’m having his issue.

Update: I suppose I should have been pip installing fastai this whole time. Oops.

I am having a problem, Colab is dying often(after 4 hours once, and after 6 hours of train another time yielded no result), and is slow(taking about 1sec for a batch, and I have a huge dataset); so after training of say 6 epochs (almost 3.5 hours) if I find a few more epochs would have made it. But to add two epochs will add a 5 hour penalty, since I have to run learn.fit_one_cycle(8) instead of learn.fit_one_cycle(2) which will take 1 hr more. I can’t use learn.fit_one_cycle(2) because as you can see from the screenshots the loss is increasing (and it should because the learning rate should’ve decreased I guess, instead it is increasing). It will be very helpful if someone can say how to bypass this problem. 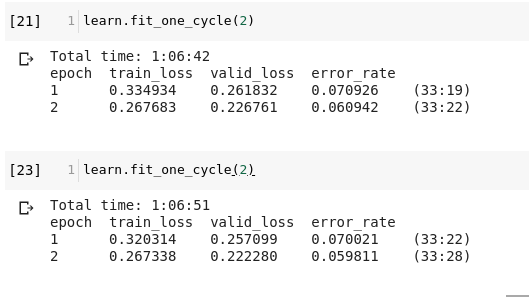 Please refer to this:

We are working on this. For the moment you can use this function:

Where you can either feed in Training or Validation Dataset and Dataloader. For the lesson 2 notebook you can call it like this:

We are also working on showing and being able to change the labels in the widget.

It would be great if someone can disprove me, or tell me a way to design an experiment to test my theory

lesson 2 download, I am confused how do this on google colab.

what should i put on the file/path?
something like this: ‘c:/Downloads/blackbear.txt’

it does not work?
something that i miss?

No i wasn’t talking about adding custom head, i wanted to use custom model which you can use with Learner.

I have trained resnet34 model on a certain dataset. I would like to use those weights in different application. How should I do it? One way of it was using load() using create_cnn() object but for this it requires initialisation of learner object which again requires use of loading ImageDataBunch(). Is there any work around for this?

I wanted to increase the number of cat breeds in the pet dataset - I have downloaded this from google images. Is there a way to combine the data that I downloaded for the specific cat breed to the ImageDataBunch we get from the pets dataset? Or would I have to manually adjust the files?