Just got started with FastAI and getting addicted pretty quickly

I’m doing the homework assignment, and I’m getting scores for the Kaggle competition above 15 (not good). I’ve spent some time debugging this. At first, I realized that the ids in the file were incorrect due to how get_batches iterates through the directory of test images, but even after correcting for that, I’m still in the 15s.

As I dug around, I noticed that there were lots of 1.0 probabilities in my results file. I thought to myself “that doesn’t make sense – the chances of getting a 1.0 on the validation data should be low, let alone on the test data”

But sure enough, when I run a prediction on a small set of both the test data and the validation data, I get tons of 1.0 probabilities. 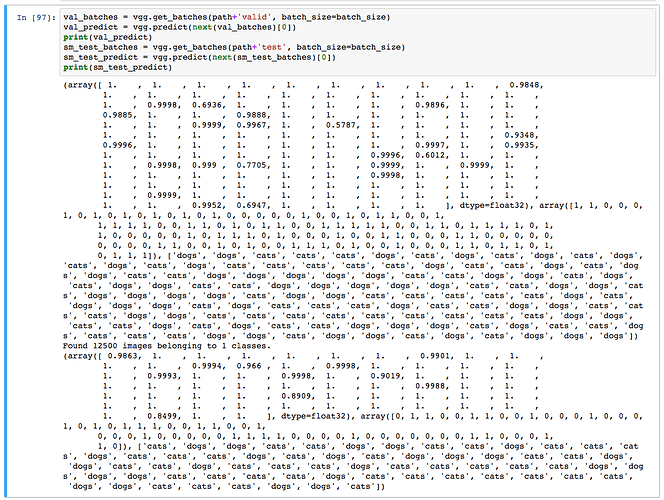 So my questions is twofold:

That last code sample screenshot was a little messed up so here’s a better screenshot of the code broken out w/ less data printed but sill those 1s.

Jeremy mentioned in one of the lessons that the classifier net used for that example tends to produce overconfident results. One way to avoid it is to increase the temperature of the softmax (if you were using one) (cf.https://www.cs.toronto.edu/~hinton/absps/distillation.pdf ). But more easily, just np.clip() the probabilities between 0.05 and 0.95. The crossentropy loss function hits you hard if you are maximally confident but you happen to get the prediction wrong.

I’m running into errors when trying to run get_batches on my test directory containing unlabeled dog and cat images. I’m working on step 11 of the homework for lesson 1. The structure of /test1 is simple: it doesn’t contain any subdirectories and only contains the set of unlabeled images.

Looking at the error messages, it seems like the error is occurring image.pyc in the flow_index method which has the function signature:

I’m having a hard time seeing why N is getting the value 0. Has anyone else run into this problem?

Edit: this issue doesn’t happen for /train which does have two subdirectories…my suspicion is that the issue has to do with directory structure, but I’m not sure. 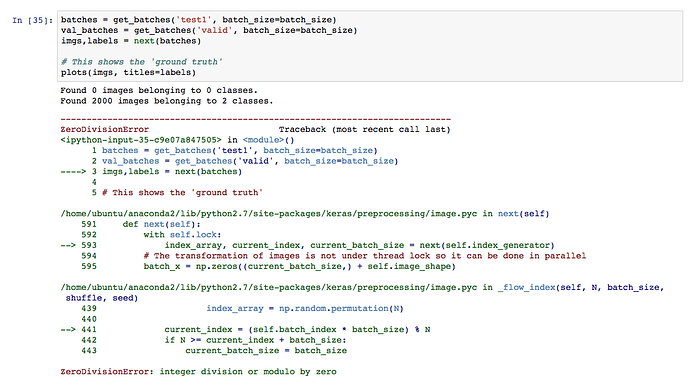 I think your suspicion is on the mark - try putting the unlabeled images into an additional subdirectory within your test directory.

Hi,
This was a time ago but if I am not wrong, you need add the full path to the image name. You can check in this link Questions regarding lesson1

Thanks JRicon! I had a similar issue with installing unzip and your command did the trick.

That worked! Thank you!

Hi,
I am using Azure VM and trying lesson 1 notebook

Python snippet below initially runs forever and echos some C++ code. Seems to be compiling something.

After a while with no feedback, I stopped the kernel and run it again and then it gives a different error

I tried to update Theano to latest version [0.9.0rc4] but still got the same error

Anyway, this passed the above errors but it seems the Keras copy installed has some problem as shown below

Will see what I can do but help is really appreciated

Fixed : Keras 2.x seems to have some breaking changes

Solution is to install Keras 1.2.2 which is last version before 2.x as below

So, despite changing the backend in the keras.json file to point to theano, I get the following error

while running the code in cell 36

Hi Peter,
i get the same error, did you manage to resolve it?

When it tries to initialize Vgg16 it came back with an error, it says requires h5py (when it tries to load the weights) I downloaded the model properly and install h5py also.

Do you have any suggestions?

Thanks a lot Mikkel, your post made me realize that the error message was misleading. Turns out the download of the models was interrupted the first time i ran the notebook, which led to the file being corrupted. If somebody else runs into the same problem, the solution is to clear the keras cache (rm ~/.keras/models/*) then re-run the code. It will download the file again.

Thank you very much for that, Jose! I want to add some color here so anyone else seeing similar scores can learn from my mistakes. While it’s true that bounding probabilities does improve performance, my problem was a typo. Notice in my screenshot above how none of the probabilities were close to 0? Well that should have been my first clue. I had simply typo’d my python code that took the output from vgg.predict.

While training in the jupyter notebook, getting invalid unicode characters rendering as boxes in the end, after the accuracy values etc Should I set some encoding in environment variables?

I am running this course in local machine GTX 970 , 8GB RAM, Manjaro Linux

Would setting this up in docker be any better? Anyone using Docker?

I took a little pain setting it up correctly, would love to make it replicable.

In Arch + docker, combine with steps provided in install_gpu.sh (in git repo of the course) :

If you are using bumblebee, load nvidia module (without primusrun or optirun)