When import fastai in Jupyter I see the following error:
" ImportError: dlopen: cannot load any more object with static TLS "

My Jupyter server is running on AWS EC2 my laptop’s browser connects to it over SSH tunnel.

Refer to this picture, 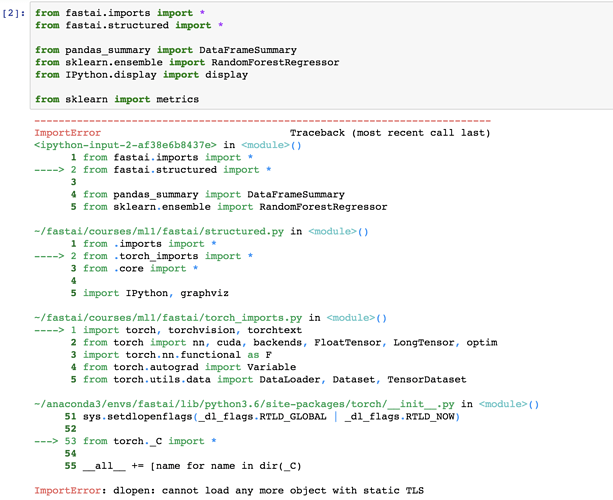 thank you in advance!

you can try killall python

thanks @parrt!!!. but I don’t see any other python processes running on the AWS EC2 instances.

I created mine with an image that had deep learning libraries on it. Did you create a t2.medium?

The first Google result indicates that it probably has something to do with opencsv: https://github.com/tensorflow/models/issues/523

Thank you @parrt, now it works!

From the above link people suggest amending some source code. But I am afraid modifying the fastai source code may not be practical. So I just terminate and create a new EC2 from another image, then set up from scratch and it works now.

In summary, here is my troubling shooting history in case anyone else is interested in:

my first Ubuntu image is “Ubuntu Server 16.04 LTS (HVM)” from Oregon, this image originally has about 80% (of 50GB) disk occupied, causing writing body error if I download the big csv data file, so I abandon it.

My second Ubuntu image is Ubuntu Server 14.04 LTS (HVM) from Oregon, it keeps prompting several ImportError when I run fastai lesson sample such as: cv2 (which can be solved by running source activate fastai, libSM (which can be solved by running sudo apt install python-qt4), and dlopen (which probably needs to change fastai source code per https://github.com/tensorflow/models/issues/523. This may not be easy for me to handle.)

Finally “Ubuntu Server 16.04 LTS (HVM)” from OHIO is good for all the things after solving the missing cv2 and libSM issues (like I mentioned above). The dlopen issue never shows up on this instance.

So, for some importing problems, I think AMI image from different region matters.