How to use Interpretation API in case of multilabeled dataset

Should we use the interpretation api differently as we deal with a multilabeled dataset?

Folks, since some of you liked this post, I imagine you’d need an interpretation tool for multilabeled contexts.

That’s really cool ! Thanks a lot

I tried to make a PR (but couldn’t find how to do so) because I was wondering if it was possible to change the argument’s name figsz to figsize as in the original plot_top_losses() function.

because I was wondering if it was possible to change the argument’s name figsz to figsize as in the original plot_top_losses() function.

Yes, apologies for having named that param in a different way w.r.t. the rest of the library

When I plot_multi_top_losses() and view the images, it displays only one label (category), as illustrated in the screenshot below.
At first, I thought it was because I used a high threshold (0.5). I lowered it to 0.1, and the plot function still only displayed 1 label.

Since you worked on such a function and problems before, I was hoping you could help me.

More info about my dataset and steps I did:

Each images in my train set has 2 labels:

I created the databunch object, set the accuracy thresh to 0.1 and trained a resnet50 model, no errors popped up.

Here is the result:
I got a 70% accuracy, which would be too high if it predicted only 1 label for every picture in the validation set. What do you think ? 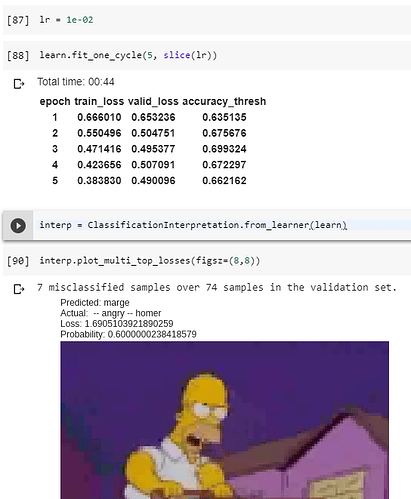 ok, If I’m not misunderstanding you, you expected it to have shown something like “Predicted: --happy-- marge”.

But I don’t know if this a multi-label classification problem.

Ok. You get a multi-label classification task when your data points can have more than one label (each), and this does actually happen to be the case at least once.

Now, you got a domain like this (if I’m not making mistakes): each scene is a data point, and each of your data points can in fact have more than one label: Indeed, it can simultaneously belong to up to two classes taken from a set of 4, that is, the cartesian product [homer,marge] X [happy, angry] (once you throw the ordering away).

If the above setting describes your domain correctly, you did good in using plot_multi_top_losses().

Why doesn’t it display the predicted class correctly? It should display an element from the cartesian product above, and indeed it does so for the actual class. The reason lies here:

Since it acquires the names of the predicted classes this way, it seems that the learner just predicts over two classes: homer and marge. It should predict over four classes:
homer - happy
homer - angry
marge - happy
marge - angry

It would be instructive to look at your data as a whole. Can you provide additional details about the dataset and, more importantly, its labeling?

First of all, thanks for your help, I really appreciate it !

Here’s the information about the dataset. 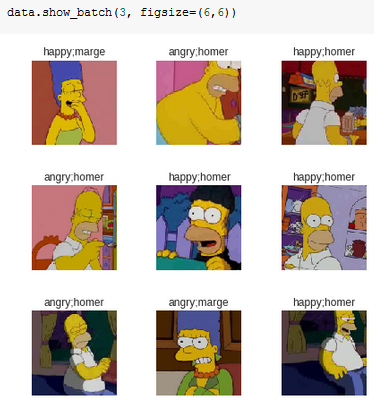 Both the training and validation images are contained in a single folder.

Labelling - I’ve tried to use the same labelling system as the one in the planet dataset: 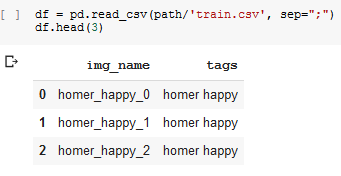 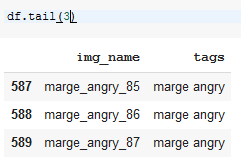 I’ve tried to rerun the training process and plotted the results: the model seem to have only predicted the expression 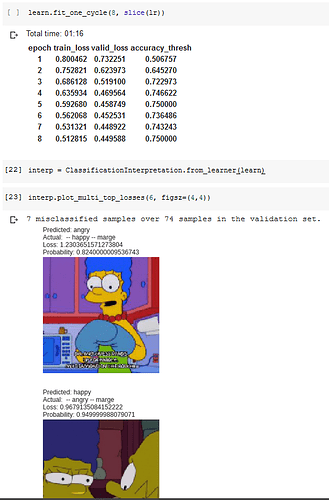 Let me know if you need anything else. Thanks again.

Let’s see what the model predicts, apart from the interpretation api.

Here is the result of the predictions for 2 images:
It looks like it indeed tried to guess the character and the expression in each image which is pretty cool. 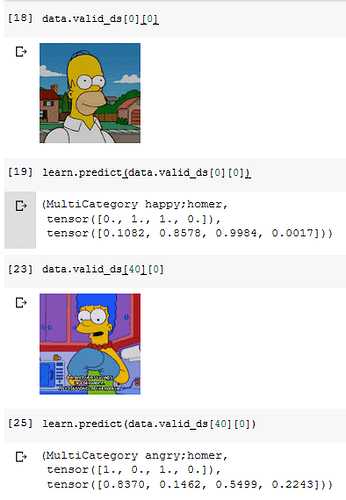 We are almost there… I got an idea about the probable culprit.

I need another thing or two.

I will catch up with you later (

)
Thanks again for your help !

No problem.
It seems we have our answer. Note that it is not like I thought in the beginning, that is:

Rather, we have four distinct classes homer, marge, angry, happy. Now it seems the images are labeled with exactly two labels each (neither less nor more than two). Given this fact, the learner learns to predict always two labels over four, and indeed you get (see the examples you provided above) just two entries of the tensor which are above the prediction threshold.
plot_multi_top_losses(), in this case, just picks up the largest one. One modification i’ll certainly do will be to pick both the relevant entries, but note that in your case it would be better to reprocess the csv in order to generate labels like the ones I was speculating above: in such manner you’ll be able to feed the model with scenes contaning both homer and marge, getting a prediction like “homer-angry, marge-happy”.

You are right about the fact that each image has exactly 2 labels. I didn’t know it would affect the learner to predict 2 labels, that’s interesting.

I don’t quite understand the part where you said:

Could you clarify this part a bit ?

I will follow your advice and reprocess the csv, as when I fed the model an image with both marge and homer, it predicted: ‘homer; happy’. 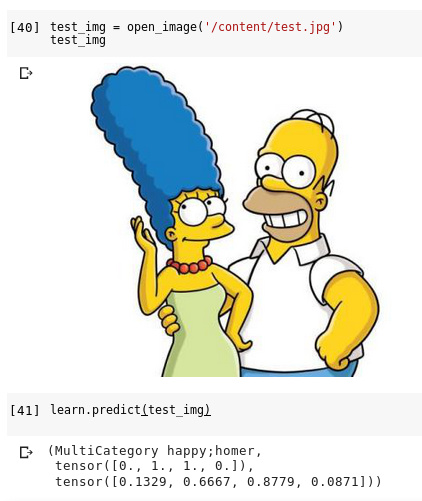 From here, I may rework the dataset a little so that the goal will be recognizing several characters in 1 image to have a better understanding of how/what the model learns (thanks to you, my understanding has already improved

). Then, l will add the expression (emotions) element.

Could you clarify this part a bit ?

Yes. Look at the tensor containing the probabilities: is has the outputs of four sigmoids (vs. the output of a softmax you get when you work with single-labeled data). Two of those four entries are near zero. The other two are much greater than zero. Every entry which stands above the threshold you established is a positive prediction.

I engineered the method plot_multi_top_losses() to pick the dominant prediction, the one closest to 1, since doing otherwise would have been a bit tricky and prone to potential errors.
One modification I should do would be to look at the threshold established by the user and label as positive prediction every class for which the probability is above that threshold (mimicking the behaviour of learn.predict(), but please appreciate that you can do different training cycles with different thresholds, and this is the part which makes the task a bit tricky.

I will follow your advice and reprocess the csv, as when I fed the model an image with both marge and homer, it predicted: ‘homer; happy’.

Great. In that setting, you will be able to predict over a scene which has both personas in it, an ability your current model doesn’t possess.

Thank you for having inspired several ideas about how to improve the method. I’ll work upon them!

Do you think it would be possible to add heatmap(GradCAM) to multilabel interpretation?

Yes that’s something I should have added from the beginning. Now with fastai v2 on its path for final release, I think it would be wiser to invest our time developing addons for it!

Did you check the course notebook lesson6-pets-more.ipynb there are some example use cases for single label.