This is a work in progress and I hope people contribute. My vision is that this is a place for short descriptions of each term: about 3 lines or sentences. If people want to add links to blogs and papers that would be cool too. Maybe we can add some sort of voting tally to put the best blogs at the top of any lists. Cheers!

The activation function is any non-linear function applied to the weighted sum of the inputs of a neuron in a neural network. The presence of activation functions makes neural networks capable of approximating virtually any function. Commonly used functions include ReLU (Rectified Linear Unit), tanh, sigmoid and variants of these. These are element-wise functions. They never change the dimensions of the matrix only the contents.

Adam is an adaptive learning rate algorithm. Updates are directly estimated using a running average of the first and second moment of the gradient and also include a bias correction term.

These are linear functions. If you are multiplying things up and adding them together that is a linear function. They are not always exactly matrix multiplication. Convolutions are Matrix Multiplications with some of the weights tied, so they are more of affine functions. If you add an affine function on top of another affine function it still is an affine(linear) function. So adding some nonlinearity like Relu in between will make more sense and give you a really deep neural network.

Backpropagation is the primary algorithm for performing gradient descent on neural networks. First, the output values of each node are calculated in a forward pass. Then, the partial derivative of the error with respect to each parameter is calculated in a backward pass through the computation graph.

Back Propagation Through Time (BPTT)

categorical variables are mainly strings. You can create date variables also at categories. eg. day of the week, month, day of the month

Aka dimensions
For images, the colors: red, green, blue (3) or black and white (2)
For language data: different types of embeddings

Data organized in a table or a .csv file. Dataframe is a term from Pandas

The data that you feed the algorithm.

For example, a dependent variable tensor is

A mapping of a word or a sentence into a vector
E.g. word2vec

When the standard deviation becomes equal to infinity.

For example, an independent variable tensor is

To go through objects (add types of objects?) one at a time.

A tag applied to an object.
For example, the name of an image.

There are only and exactly 2 types of layers either containing parameters or activations.

Parameters include weights and biases. These numbers get initialized randomly first, but better to initialize them with kaiming initialization (init.kaiming_normal() from torch.nn). Then our model learns them. We update parameters through gradient descent algorithm.
These parameters are used to multiply with input activations resulting in a matrix product.

Mostly used in the last layer for calculating outputs.
It predicts values between 0 to 1. Any number of values can be high near1 at a time. No need to add up to 1. So it’s used in multi-label classification, like planet dataset from Kaggle where a single image can have agriculture, road, and water at the same time.

Only used in the last layer for calculating output probabilities. It predicts values between 0 and 1 and these values have to add up to 1. Softmax likes to predict a single label.
We use it in a multi-class classification where you have to choose between mutually exclusive classes like MNIST, CIFAR or dog breeds competition on Kaggle.

Jeremy explains it in the excel spreadsheet 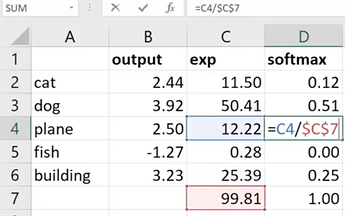 Screen Shot 2019-05-03 at 11.00.56 PM.jpg910×570 94.1 KB
In the multi-class scenario like above, we have to take exponential of each output/prediction value. We then have to add all exponential values(99.81 here). To take softmax of a class, we then divide the exponential value of that class by the sum. Mathematically it is defined as follows,

Not exactly a deep learning concept. However, it was mentioned several times during Part 2 so worth to mention.

Matrix multiplications and Relus stacked together 1 after another has this amazing mathematical property called UAT. If we have big enough weight matrices and enough of them, it can solve any arbitrarily complex mathematical function to any arbitrarily high level of accuracy.

Looks good! Probably it is worth to create a Wiki from this post.

Just curious, how in depth do you plan to go? Are you trying to keep the glossary specific to Deep Learning and for fast.ai only?

I frequently visit these online resources when I need to refer to commonly used terms:

We need a constantly updated deep learning glossary. Thanks.

I believe that probably this thing once could be moved into fastai docs or even something like https://glossary.fast.ai for a wider audience. (And the fastai fellows, of course). I think it has all chances to be frequently updated, thorough and comprehensive enough taking into account how many people are involved in the community.