In the latest master branch, ConvLearner has been replaced with create_cnn

Yup - everyone should ensure that they notifications turned on for the official updates thread, since any breaking changes are announced there:

Note that after you conda update and git pull, you’ll find that there’s been one change to fastai - ConvLearner is now called create_cnn. You’ll need to make that change in any notebooks that you’ve created too.

In lesson1, I get the following after I “git pull”:

It works now after I issued the following commands also:

In lesson1, I get the following after I “git pull”:

When returning to work, follow all the steps at http://course-v3.fast.ai : 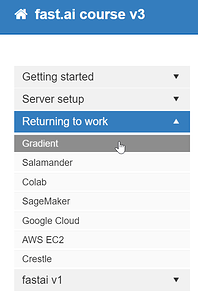 and then inside fastai root folder:

Otherwise I’ve got this error:

As suggested by @smugger, updating fastprogress will fix the issue.

You have to also update fastprogress to 1.0.12.

With a dev install you have to manually update deps. In this case, your fastprogress lib is out of date.

Is there a way to just update the packages associated to a specific channel?