Since projections keep coming up in class, what are your favorite examples of interesting latent factors/projections?

I like this example from the original Netflix Prize winners: 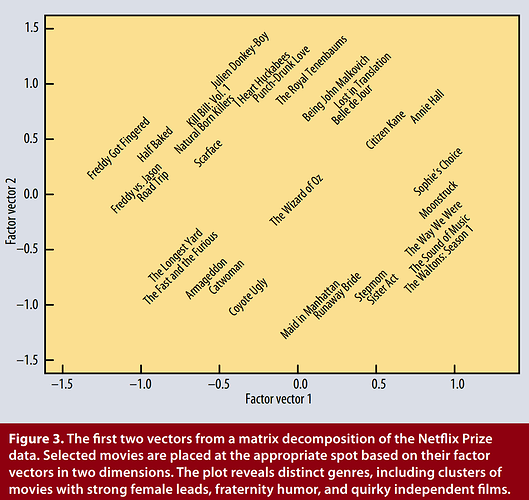 "Movies are placed according to their factor
vectors. Someone familiar with the movies shown can see
clear meaning in the latent factors. The first factor vector
(x-axis) has on one side lowbrow comedies and horror
movies, aimed at a male or adolescent audience (Half Baked,
Freddy vs. Jason), while the other side contains drama or
comedy with serious undertones and strong female leads
(Sophie’s Choice, Moonstruck). The second factorization
axis (y-axis) has independent, critically acclaimed, quirky
films (Punch-Drunk Love, I Heart Huckabees) on the top,
and on the bottom, mainstream formulaic films (Armageddon,
Runaway Bride). There are interesting intersections
between these boundaries: On the top left corner, where
indie meets lowbrow, are Kill Bill and Natural Born Killers,
both arty movies that play off violent themes. On the
bottom right, where the serious female-driven movies meet
the mainstream crowd-pleasers, is The Sound of Music.
And smack in the middle, appealing to all types, is The
Wizard of Oz.

“In this plot, some movies neighboring one another typically
would not be put together. For example, Annie Hall
and Citizen Kane are next to each other. Although they
are stylistically very different, they have a lot in common
as highly regarded classic movies by famous directors.
Indeed, the third dimension in the factorization does end
up separating these two.”

–from an article written by the winners (link is to a pdf) https://datajobs.com/data-science-repo/Recommender-Systems-[Netflix].pdf