@hamelsmu I just started a new (latest version) Fastpages blog, this time called devblog4: Clicked the “…clicking on this link”, got the PR, added both keys, enabled write access, merged the PR, saw the build Action complete with a green check mark.

But the intended URL (as it appears in the initial PR) is giving me a 404 File not found: https://drscotthawley.github.io/devblog4

But instead, manually adding a trailing slash works:

An easy to use blogging platform with support for Jupyter Notebooks.


…oh, see, the forum even auto-generates a preview if I just paste in that URL without adding backquotes. What I wrote was https://drscotthawley.github.io/devblog4/

Is that the intended behavior? I thought trailing slashes weren’t supposed to matter; never noticed a problem on previous fastpages versions.

NOTE on browser dependency: Seems that Chome will auto-map the non-trailing-slash URL to one with trailing slash, and so it resolves. But other browsers (Brave and Firefox) and apparently this forum system don’t append a slash, and so the URL without the slash fails.

(sorry if this is a repeat of another thread; i did a search on “fastpages url slash” first and didn’t find anything.)

I am confused https://drscotthawley.github.io/devblog4 opens correctly for me on firefox. Let me know if I am not following you

Not for me: Here’s a screenshot I just took from Firefox: 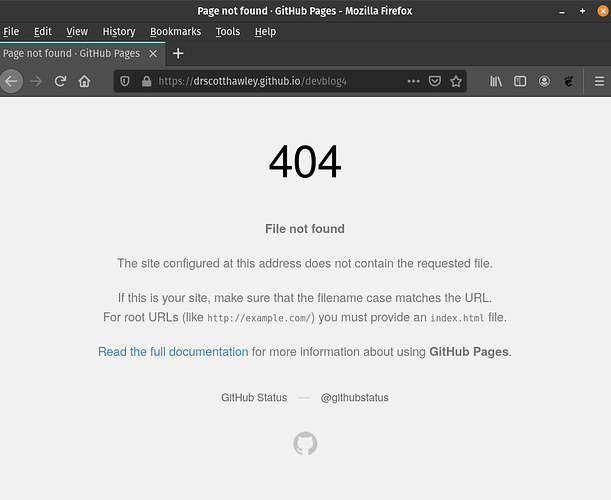 Wait, WHAT’S happening? I entered the URL again into Firefox (without the slash), and now Firefox is adding the trailing slash too!

…Ok everything is adding the slash now, even curl. So, no more problem.

Is it possible that there’s some time-delay in GitHub Pages’ implementation of URL forwarding (from non-slash to slash)? So the behavior I saw was only temporary?

One other possibility: I added a couple posts to the blog and pushed a commit. Perhaps the rebuild triggered the URL forwarding?

@hamelsmu BTW, the whole reason I was doing this was to test if fastpages suffers from an Issue I reported for nbconvert, and… looks like fastpages has it too.