currently I am working on the OSIC Pulmonary Fibrosis Progression Data. I have loaded the Dicom Files in a datablock and I can display it.

The problem is, that the data is not normalized and I could not figure out how to normalize it. It is extremely bright or dark.

Here is my code so far:

Now, if I display it by running the following code:

I get the following images: 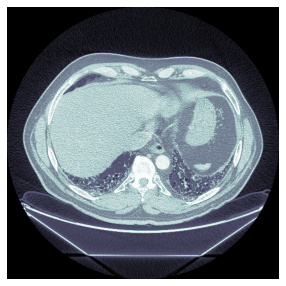 Which I get, when I run the following code:

Any idea how I can do that?

I had to use the following parameter in the Resize method:

Otherwise I would get a ValueError: “Image has wrong mode”.

If there is any more information you need, please let me know. Thanks!

The dcmread().show() function has the following signature:

From this I was able to deduce that the cmap is plt.cm.bone, so you can start by using dls.show_batch(cmap=plt.cm.bone).

This gets you halfway there, but you probably need to also account for: min_px=-1100, filternorm=1 and filterrad=4.0. I’m guessing this could be done using item_tfms, but requires some additional research.

Please let me know if you make any progress, I think we are in a similar position.

ValueError: “Image has wrong mode” might be due to this issue https://github.com/python-pillow/Pillow/issues/4402. The Resize method in fastai uses bicubic interpolation per default which apparently does not work for uint16 images.

I ran into similar problems with medical images. When working with DICOM images one has to differentiate between the raw pixel values and how the image will be displayed, the later is specified in the image header. However, the image header is not used by dcmread. Also, as Martin correctly said, DICOM are often uint16, which is not supported by PIL.
To effectively work with DICOM I slightly adapted the PILDicom.create and dcmread function.

The dcmread2 function rescales the DICOM image before returning the pixel array (see here for more information). Rescale intercept and slope are both given in the header. Rescaling might be important for both CT and X-ray, as the raw pixel data can be very different from rescaled data. For MRI it is usually not of much importance. However, be careful with CT as negative values will appear after after rescaling.

Next is to adapt PILDicom to use dcmread2 and also convert pixel data to uint32, which can be handled by PIL.

Lastly, when construction the datablocks, the batch_tfms need to be adapted:

Hi ! Thanks for your answer.
When doing this:

I think I’ll be modifying the images that I use to feed my model. Am I right?
I want to use 16 bits png chest xrays images to feed it instead.

I’ve tried calling dls.show_batch() and all images looks white, which I think is due to the function is not normalizing correctly the values from the 16 bit images [0, 65535] due to:

uint16, which is not supported by PIL

Thank you for posting this solution. It worked perfectly!