Fastai (and pytorch) on Windows

I’m creating this thread for general discussions about using fastai and pytorch on Windows, and in order not to pollute the installation thread created by @jeremy, which, I think, should be reserved to troubleshooting windows installations.

Thanks! I googled for it with no success.

Thanks! Another tool which can come useful.

that command fails for me “AttributeError: module ‘torch.cuda’ has no attribute ‘memory_allocated’”

Ok but it should display 2 black bars too. One with 360 iterations, the other with 32 iterations, with relative wall time. Example while carrying out the first one:

I think you did’t delete your tmp folder, reusing precomputed activations. May you please clean your activations and re-run the same test for me, making particular attention to ETA relative to the first 360 iterations?

I think you did’t delete your tep folder, reusing precomputed activations. May you please clean your activations and re-run the same test for me, making particular attention to ETA relative to the first 360 iterations?

It would be easier for folks if you get people to do one epoch with precompute=False I suspect.

I suspect it too

However, folks, look at what happens:

I would be very grateful if you could do the same test (it could be informative for you too). 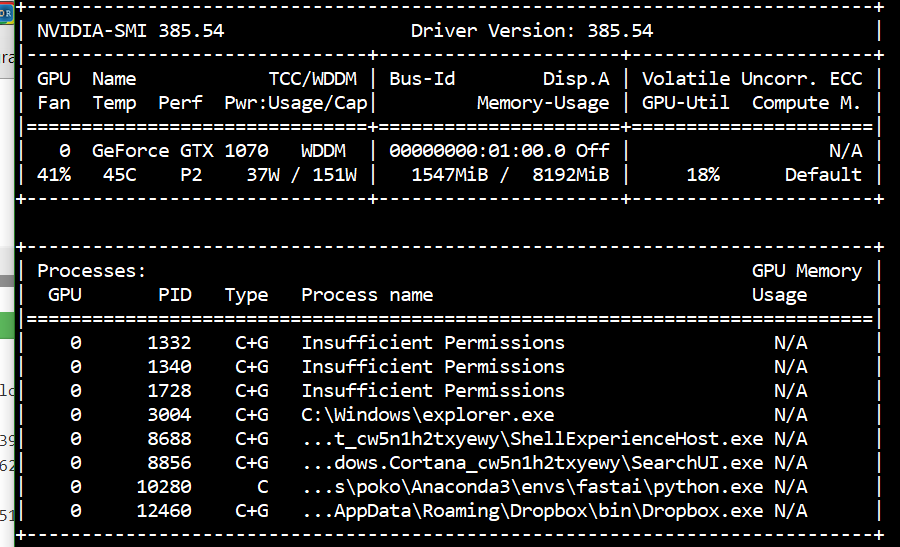 2.deleted the tmp folder, ran precompute at False. here is nvidia-smi at its highest that i could capture…not that much diff than yours…1.4GB+ 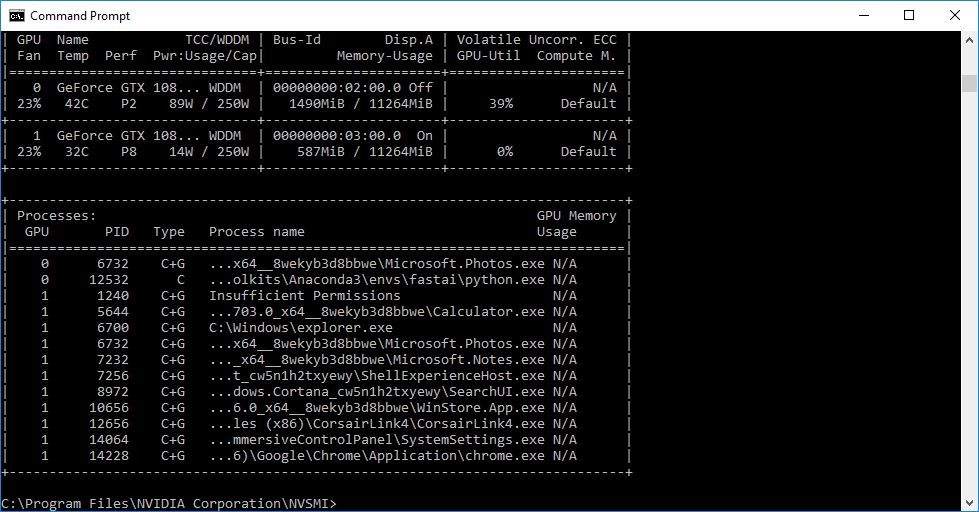 One thing to be careful of is that your Nvidia GPU isn’t doing any screen rendering. You want your onboard Intel GPU doing all that. Go in to the GPU control panel and make sure everything is set to use onboard graphics. If your Nvidia GPU is trying to do CUDA at the same time as graphics, it’ll kill performance.

I was going to check that out on my laptop, but the desktop has no onboard video. Next time i boot it up i suppose.

Here some numbers for a Quadro M1200: 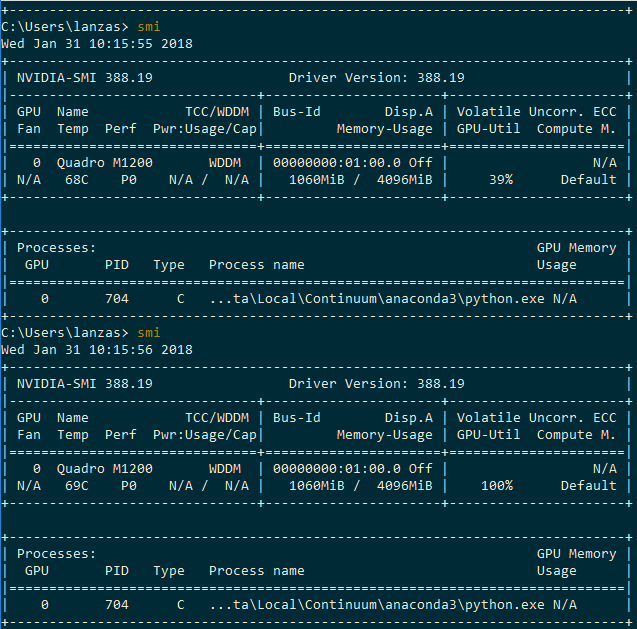 One thing to be careful of is that your Nvidia GPU isn’t doing any screen rendering. You want your onboard Intel GPU doing all that. Go in to the GPU control panel and make sure everything is set to use onboard graphics. If your Nvidia GPU is trying to do CUDA at the same time as graphics, it’ll kill performance.

That was a good suggestion. Now my monitors are connected to i7 4770 integrated graphics.
All system settings are configured accordingly. Still, the 1070 appears to be almost 3X slower that a 1080ti, which cannot be. I obtained 4:30 minutes, while @FourMoBro obtained 1:44 in 1st epoch.

but the desktop has no onboard video

No problem. Just set pytorch to use a 1080ti which is NOT connected to monitors.

Here some numbers for a Quadro M1200:

Thanks for having submitted your results. Regardless, it is good to see other italians here on fastai

Thanks @FourMoBro.
It seems that my gpu is used, more or less. My memory and % are not that different with respect to yours. Plus, the CPU % never spikes over 40%, so that task is definitely not performed by the cpu.
It’s just that I am too much behind you. I should be ~80% behind you, not ~250% like I am.

There is no justification for such a poor performance. I’ll post others results as I go through them.

Where to begin…let’s start with nvidia-smi.

Keep in mind that nvidia-smi is a snapshot at the moment you enter the command. it is not dynamic. so, if you want, keep executing the command. you will see temperature change as well as %Gpu utilization. while my utilization % was pretty small in most cases, I was able to see a few times where it hit 90% during rapid re-executions.

While the GPU is doing the calculations, there still is much the cpu has to do in getting data and writing it. getting batches or whatever. I would be interested to know if you have a spinning/mechanical hard drive or is it a SSD or NVME. If spinning that will probably slow things down tremendously. It would also explain why my times in windows are slower vs ubuntu as my ubuntu OS is on a much faster nvme drive.

back to the cpu, what is your cpu type/model? mine is a 6core, and while learning i can see the temp rise 6C over idle. I guess I am saying that while we expect the gpu to handle the NN calculations, there is still a large OS administration overhead that the cpu has to do.

I’m considering an upgrade, but GPU prices are increasing, and the cpu I want (epyc, for its 128 lanes) requires mobos still scarcely available in Europe. So, instead of building another crippled system, I prefer to wait.

Anyhow, the most important thing is that I am capable of following along with windows.
Thanks, both you and Jeremy have been very helpful.

Can you, please, elaborate on how to do this? I can’t find anything related to it in the NVIDIA Control Panel.

I guess it’s by default behaviour of you haven’t changed it .
Just to check head over to the control panel of Nvidia an check whether the GPU is also doing graphics rendering

Performance is currently pretty bad for me on a Windows machine in Azure. I have 1 Volta GPU available and the utilization is very spiky. Here’s a peek at the GPU with nothing running:

And here is a look at the GPU utilization via nvidia-smi dmon at one point during that test: 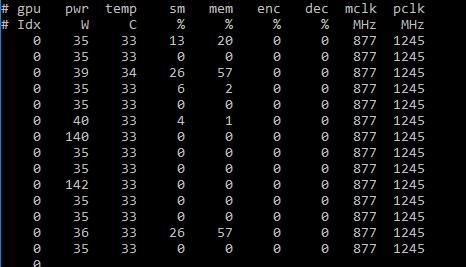 Notice how choppy it is. Many cycles without any GPU utilization.

I wonder what’s going on here?