I have some conceptual questions:

I trained a NN with the following arquitecture

Thanks, and best regards

I the arquitecture above, the target depends on the cantegorical and continius features, and if I were to train an NN just for the embeddins (to feed them into a Random Forest) I got confused about the predicted target.

Thanks for your time and help. I hope I’ve explained myself well

So, my features for my Random Forest model would be the embedding vectors plus the origin continius features

I hope I’ve explained myself well

Hi @PalaashAgrawal for your feedback …

I trained a model using a fully conected NN with embeddings. The target es the column income. The model performs well (you can see the metrics).

But now, I want to use XGBoost and give it a try. However, considering the originals dataset’s, income is predicted using the categorical and continius features. So, I don’t want to use OneHot o similars, because I would be losing the semantic between the categorical features, and that’s why I want to feed the embeddings vectors into XGBoost, with the others continius features obviously. So, my questions are:

I hope I’ve explained myself well

Thanks very much, best regards

Thanks my friend for yours answers … I think I wont’ continue with this approache. Nevertheless, I share with you the following Medium, which it’s my motivation for all this thread 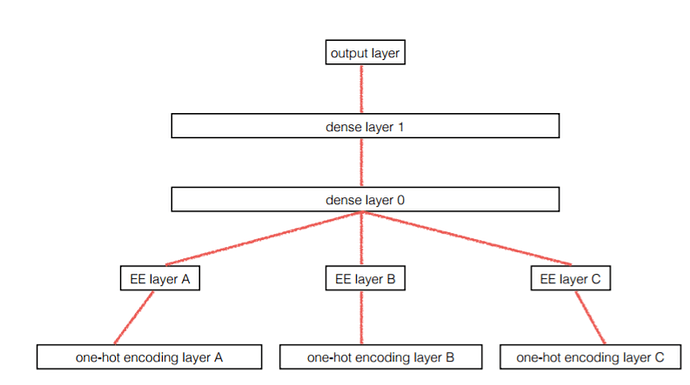 I hope you can examinate with time, and give me your feedback

Thanks my friend @PalaashAgrawal from Chile
Best regards