I recently installed Anaconda so Jupyter notebook is up-to-date and all (I think).
BUT despite that, it seems like the magic function %mv is missing. Indeed, if I type %lsmagic in my notebook, the %mv is missing from the list I obtain.

Any idea how to install it?

I could of course move the files from Cygwin, but I think it’s better for later to have everything working in a single notebook…

%mv isn’t actually a magic - there’s some config that lets you use % instead of ! in certain cases. A bit of googling didn’t find what that config is, and I can’t recall the details - so unless you manage to find it, or someone else here tells us what it is, you’ll need to use !mv instead of %mv for now.

I faced the same issue.

I just started this course…apologies I found out about this late.

In case there are those who are like me who can’t get %mv working at all, here’s another solution and its using shutil.move. 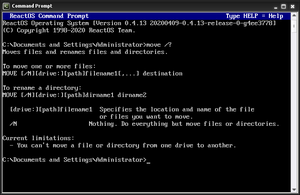 In computing, move is a command in various command-line interpreters (shells) such as COMMAND.COM, cmd.exe, 4DOS/4NT, and PowerShell. It is used to move one or more files or directories from one place to another. The original file is deleted, and the new file may have the same or a different name. The command is analogous to the Unix mv command and to the OpenVOS move_file and move_dircommands. The command is available in DOS, IBM OS/2, Microsoft Windows and ReactOS. On MS-DOS, the command is ...

This worked for me.

Thanks to my friend Mitchell for suggesting it.