Hi everyone. I am trying to run the code of this GitHub project retina-unet on the DRIVE: Digital Retinal Image for Vessel Extractor. In the project, they gave the structure of the dataset as given below. 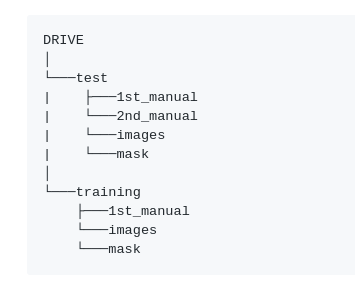 .
But once I download the dataset I don’t have ‘1st_manual’ and ‘2nd_manual’ folders.

How can I get those folders missing data?
Thanks in advance.

I don’t see it on drop box:

“For the test cases, two manual segmentations are available; one is used as gold standard, the other one can be used to compare computer-generated segmentations with those of an independent human observer. All human observers that manually segmented the vasculature were instructed and trained by an experienced ophthalmologist. They were asked to mark all pixels for which they were for at least 70% certain that they were vessel.”

Says here
But I can’t find them in the dataset.

But I don’t even see it on drop box, how were you able to download it from dropbox that it does not even have it? Were you download it form drop box? I think you should talk to the person who upload it.

Thanks jonathan. Turns out that the person whose code I was following had a faulty documentation that created the whole confusion in the first place.