I am working in insurance company, so I have a task to build damaged car recognition and estimation model. I have to predict how much it costs to repair the car. Currently I am in the middle of the third lesson of this course, so if your advice will be from the next lessons please make a note about it.

I think we have to divide the task into several parts.

I’ve researched a lot about this task and I’ve found this paper (https://www.ee.iitb.ac.in/student/~kalpesh.patil/material/car_damage.pdf) which I thought would be a good starting point. The main idea is to divide the damage into types like Bumper Dent, Door Dent, Glass Shatter and so on ( you can see the example below) and train the classifier. We are working on the task 1 to find locations of the damaged parts. 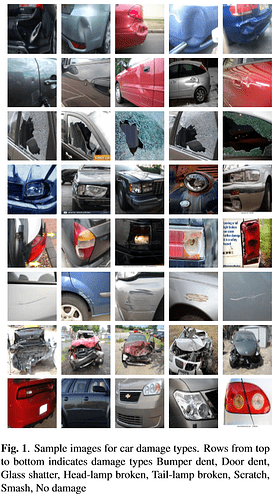 In the paper there is 8 types (output) but I decided to take 3 just for testing. So in my case I have Head lamp broken, Tail lamp broken and No damage. 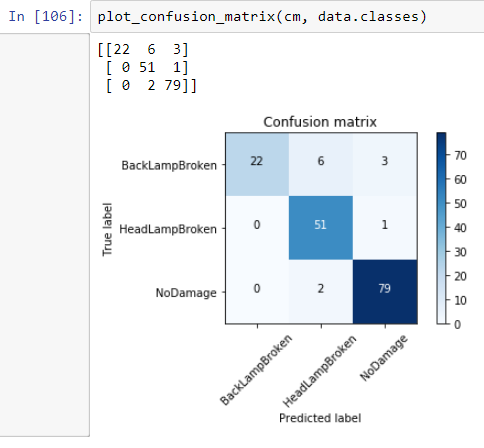 Now if we want to localize the damaged part, As the paper says, "For each pixel in the test image, we crop a region of size 100×100 around it, resize it to 224×224 and predict the class posteriors. A damage is considered to be detected if the probability value is above certain threshold (0.9) " I think for each pixel would be too much so I took 100x100 square and shift 20 pixel each time (sliding window), then I am predicting the result for each 100x100 image and if the probability is more than 0.9 I’m saving the image.

below there are some examples of this process 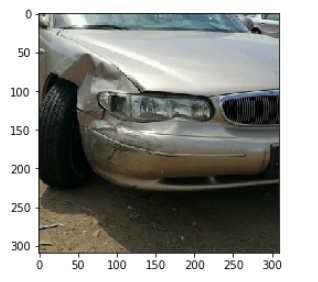 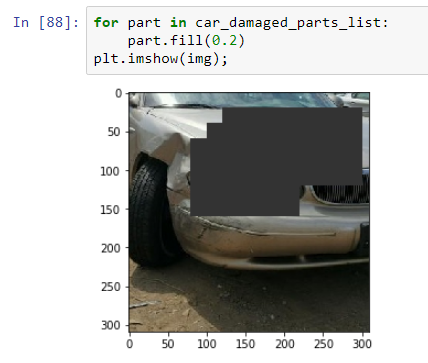 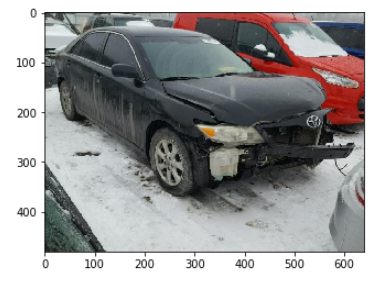 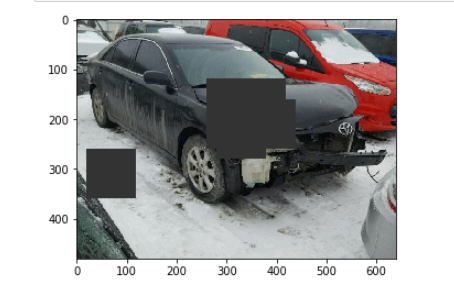 In this case it works fine, but there is still error the snow on the ground has prob > 0.9 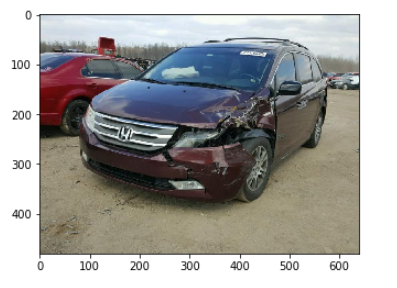 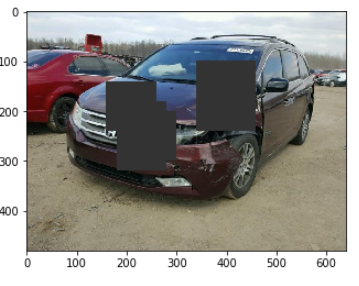 As you can see in the second case the result is worse, It can’t detected the broken Lamp but detect the unbroken middle part of the car. In some cases I have even worse results but there are also good results …

So there are several tasks to do next. I have to add damaged types (The problem here is that in some picture there will me more than one damaged type), I have to collect more data, somehow I have to differentiate between good localized parts and bad localized parts (but both of them have >0.9 probability and I don’t know how) and I have to start the second task which is to Estimate the repairing costs (I have no idea how to do this).

So any tips, advice and help from those who have some experience would be great for me. Thanks in advance !

Would it be possible to gather more data using a site like Mechanical Turk to outsource the determination of damaged parts? That could help you get a more robust dataset. It looks like you’re on a good track, I’m surprised you have that accurate of a model, nice job!

I agree with KevinB. Your dataset is very small. Getting more data (at least 400 examples per category) is important. In the mean time, try heavy data augmentation (past what is available in fast.ai), i.e. take a look at https://github.com/aleju/imgaug and create several augmented versions of each of your images. That way you should have at least 1k images for each class to feed into fast.ai (ideally use imgaug to do augmentations that are different from the augmentations available in fast.ai).

Also how are you training the classifier that is used on the cropped (100x100) pictures? Can you be more specific on your training procedure for that classifier?

also check out lessons 8 and 9.

I guess you need look at multi-label output vector so that you output probabilities for each individual damage class.

I think there might be an issue in this approach. Your model is trained on 320x320 crops and as you see by your confusion matrix it is doing a pretty good job at classifying. However then you ask it to make predictions on 100x100 crops. I see two problems with this:

Thanks, I will look over the lessons and test some cases including your advice. I will update this post later.

Hi Niko,
Just a question, where did you find this dataset? Would it be possible to have it as well?
Thanks! Cheers.

I’ve downloaded it from https://www.copart.com

Were you able to improve the results @Niko?

The project was canceled cause my company agreed that it was very tough and big project and I was only developer there. In other words we have not got resources for it… I haven’t done much beside what I wrote in the post. Looking at it now I think using yolov3 would be much effective at detecting the damaged parts than the approach which I used.

That’s a pity… For Yolo you can’t use the copart data (you need bounding boxes?), or what do you mean?

yeap, if you bound the damaged area in approx 2k picture and train yolov3 it will do well (I guess

We have an out of the box damage detection tool and are utilizing it with insurance companies currently as well as large rental car companies and even for industrial equipment. Logimove.com contact me at josh@logimove.com

I am trying to do small POC on this same idea.Could you please help me to go ahead.

Do you remember how you downloaded those images? Thanks