Change the head of a loaded fastai model

The code used is shown below:

However an ERROR occurs. This is because the new Dataset B has 6 categories. So when the weights are loaded there is a mismatch between the head of the new model and the previous model A.
The head of the previous model A, has 4 outputs, however for this model 6 outputs are required.
I was wondering how could i change the head to 6 outputs in order to train the new dataset B.

Thank you and any feedback is much appreciated!

This has been asked a lot on the forum. Look for something like transfer learning twice

youre right. i think this might fix it. once youre done training on the planet dataset: learn.model[-1][-1]=nn.Linear(in_features=512,out_features=5, bias=True) i think this should set the last linear layer (outputs) to the number of outputs for your data. i just plugged in the same number of in_features that learn.model[-1][-1] printed out and switched out_features with the number of classes your dataset has. then you can do learn.save(‘double-pretrain’), and you should be able to make a ne…

Your comment was really helpful! However even though I implemented the line and changed my code I ended up with another error of size mismatch. 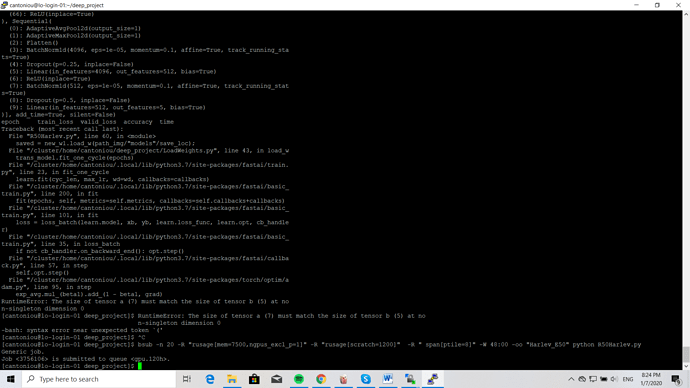 Hi @cantonioupao - would need to see more of your code but I can point out one immediate issue:

In your code snippet (learn summary) you have specified the model to output 5 features vs in your first post you indicated you wanted it to do 6?

You may have accidentally copied the exact line from that thread and forgotten to update it to what you need?
ie -> current line:

without the ** of course

Also, you may want/need to restart your kernel and reload everything after making changes like the above just to make sure you didn’t hit a memory reload issue.

Otherwise, it’s basically saying the tensor sizes don’t match so the optimizer can’t adjust the weights properly for the update step. As noted a kernel restart might help ensure you have everything you want loaded, though at a minimum you want to update the model to output the category size you need.

Hope that is helpful!

Thank you very much for your reply! The issue is solved now. I didn’t unfreeze the model before applying the change to the header and that’s why i was getting this error. Thank you both for your help and fast response!

@cantonioupao how do you freeze the layer and then change the output classes? I am a bit confused…
Please help