A recipe for a reproducible randomization

Why when use seed set those values to true or false? they should not be turned on or off in the other case? like

Why when use seed set those values to true or false?

It’s explained in this doc. And specifically to each setting:

they should not be turned on or off in the other case? like

Logically, you’re making a correct statement, @tyoc213. The issue is that we don’t know what settings the user had originally. While torch.backends.cudnn.deterministic is probably OK to assume we want it to be False during the normal usage, this is not quite the case with torch.backends.cudnn.benchmark which would actually make things slower if your input varies and in some other cases.

The way I use this helper function is restarting the notebook with the seed or without it as needed, so whatever the defaults are it gets them right w/o the explicit seed. i.e. I don’t need to restore the original settings.

For persistence, or if you adopt this function to be used in a different way, to be correct the code should be changed to store the original values somewhere (class or globals) and restore them to those original values if the explicit seed is not used, rather than toggling them.

I tried your code, but still cannot reproduce my training.

Do you have a full example?
Is there a notebooks available that shows what you are doing to reproduce the results?

It works, unless you have some other code that resets/alters the seed elsewhere. I didn’t invent anything new, that’s what everybody else uses, I just put all those multiple statements in one function.

Make sure bad_seed is not 0 when you call this function to reproduce.

Hi Anel. This question has had lots of forum activity over the past years. I think the issue is where the random seeds get invisibly reset. I understand that setting them once at the top of the notebook should work, but I know empirically it is NOT sufficient to get reproducible outcomes.

Here are some places where one of the RNGs is used:

Honestly, I can’t recall all the places where the reset needs to be done, but I think someone has already found and shown them in one of the many forum posts on this topic.

P.S. This same question comes up again and again. If you made a demo notebook that definitively demonstrates training reproducibility, it would be a service for everyone.

I understand that setting them once at the top of the notebook should work, but I know empirically it is NOT sufficient to get reproducible outcomes.

The problem is not the code, but how it is used. If you rely on the non-linear use of the notebook, this is where the problem happens. NB is handy, but it creates a ton of hidden pitfalls, because you can run the cells at random order.

p.s. you can probably modify https://github.com/stas00/ipyexperiments to automatically set the fixed seed before each cell is run. That will fix the problem for everybody. Well, ideally you will want to create a new module that does that, this would just be a quick hack.

thanks for the reply. Actually I am trying to reproduce my own results but no success so far. Of course, as soon as I’ve got something working i will posts it. But to be honest I have absolutely no clue what else to try.

How should we know if our model improves due to the parameter changes we applied or due to randomness? It is really weird that so far there is no reliable solution to this.

Basically run: random_ctl(42) before fit (same cell) or any other cell that you re-run and expect reproducibility.

You need to understand how RNG works. And then you’re golden.

So every time you re-run the cell that invokes RNG, you have to reset the seed. Hence in that same reply I suggested how one could fix it for any cell (see its p.s.)

I am going to try that now and will update you asap.

How should we know if our model improves due to the parameter changes we applied or due to randomness? It is really weird that so far there is no reliable solution to this.

Yes. And even if you manage to get reproducibility, how do you know that the improved parameters apply to other random seeds vs. this particular one?

That’s why I don’t bother much with reproducibilty anymore.

That’s why I don’t bother much with reproducibilty anymore.

IIRC Jeremy even touched on this in the lectures. Having everything be random is an advantage because you can see how the algorithm behaves overall vs having absolute reproducibility can be a hinderance in that regard because you’re stuck there. It should ideally just be used for examples and that’s about it.

Seriously, instead of helping a person to figure out how to code in python in jupyter environment, you tell him don’t bother, because who needs to know how to run reproducible code…

Perhaps I worded that wrong there, my apologies @stas. I don’t deny reproducible code is extremely important, and all your points are exactly right. If we want reproducible results exactly we need to be very careful and precautious about the seeds as there’s many different points in which they are being used. I had simply meant that overall the algorithms (from a fastai perspective) if done right should all behave in the same ballpark or so. But from a teaching and example threshold (or presentation perspective) yes exact reproducibility is needed. Apologies as I know my previous post did not explain that at all

Thank you for clarifying what you meant, @muellerzr! All is good.

Thank you for the clarification regarding RNG.
I created a minimal example and completely re-ran the notebook twice from top to bottom.
Each time with different error_rate after fit_one_cycle: 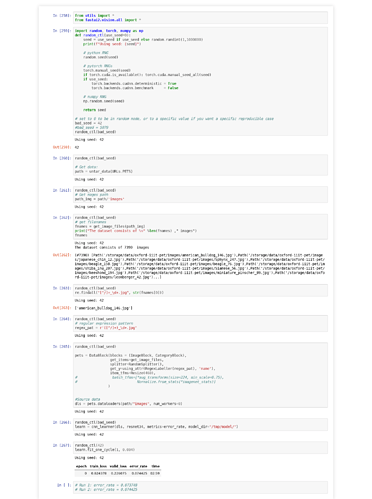 I set the seed in every cell on purpose. I also commented out the data augmentation.

Do you see anything wrong in my procedure?

p.s. you can probably modify https://github.com/stas00/ipyexperiments to automatically set the fixed seed before each cell is run. That will fix the problem for everybody. Well, ideally you will want to create a new module that does that, this would just be a quick hack.

OK, I added an option to reset seed for each cell in ipyexperiments, so you can re-run any cell and the magic will happen behind the scenes. It needs more testing and docs, but you can try:

and then on top of your nb:

now each subsequent cell will run the seed setting code before it gets executed. i.e. you don’t need to fix seed anywhere else in your code.

I may have to add an option to silence the logger if it’s annoying.

Looks correct to me. I haven’t tried fastai2 yet, so I won’t know, perhaps there is a bug and it sets a seed in the fastai code disregarding user settings? Especially, since the fastai philosophy is to randomize on purpose.

Do you see the same behavior with fastai v1? If I remember correctly it used to give reproducible results if you manually set the seed.

You can file a bug report, I’m sure Sylvain will sort it out in no time.

First of all thank you very much for your effort and trying to help.
I ran the pip installation.
Imported the module and re-ran the notebook twice.

As before the result changes after each run. 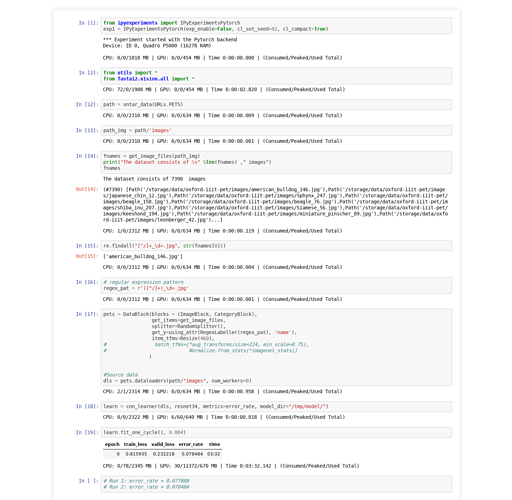 By now I am sure that you are right and that fastai2 is the cause.
I will try to repeat the same using fastai1 and provide my results here for future strugglers.

yes, of course, my module just saved you retyping the seed reset in each cell. if it doesn’t work in the first place when you did it manually, then you won’t see a different behavior. I thought that your original problem was that you were re-running the same cell with different parameters and were expecting the same random sequence. But based on your example this is not the case, so it’s not the wrong usage, but a fastai2 library issue.

Most likely fastai2 somewhere sets the seed, it needs to be found and made configurable with the default not to set it and thus allowing user to control the behavior.

splitter = RandomSplitter(), that has a seed (may be try setting that)
I haven’t succeeded with getting reproducible results either. The module is really helpful @stas thank you