What foundational topics would you like to hear more about?

When should we use, or not use, softmax

When I learned that softmax followed by negative loss likelihood is the same as cross entropy loss in lesson 9, I realized that I haven’t been paying much attention to loss functions. If somebody were to ask me “why can’t we use accuracy as my loss function?” I can tell them “Jeremy said it’s too bumpy” but I can’t say I actually know what that means. I would appreciate some intuitions for what makes a function be suitable for a loss function.

Some things I struggle with,

I would say that you cannot use accuracy as you loss function for the same reason you cannot use other metrics like ROC: because they are not differentiable.

Wow, a lot of people have the same questions I have, that’s great! A couple of more things:

How exactly do we visualize the parameter space and the loss space so that we understand exactly how things are changing?

Look at “Visualizing the Loss Landscape of Neural Nets” in

Hi, I believe that some deep learning papers are worth reading regardless of their application domain. But because of the overwhelming amount of deep learning papers published every day, my hope here is to have your help to create a curated list of cool deep learning papers: a kind of list which we might consider as must-reads in 2019. However, saying whether or not a paper is good it is not an easy task. Luckily those customary simple rules of thumb could be useful. A paper should be linked be…

Here is where I am so far (yes, I slept on it

):
I think a function needs just two things to be an error function:

For example, if we have a regression problem and we define our “accuracy” as \frac{\hat y}{y} (i.e. it tells you 100% if y = \hat y). Note that it’s different from validation accuracy. We then take how much we are off from the 100% we are shooting for by doing 1 - \frac{\hat y}{y} because after all, it’s a loss function. Then I realized that this does not have gradient of zero at y = \hat y . We can fix this by taking the absolute value:

An error function created from accuracy. I plotted it on Excel and it seems to have the same shape as RMSE. Do you think it would work?

What’s not differentiable is that for any example the loss with accuracy will either be 0 or 1. In that sense, it is ‘bumpy’. Even in your calculation, if you sum up the times your model was right and divide over all predictions, it will give you as a result one of a set of discreet values.

When using cross entropy, for any given example the model will produce a prediction between 0 and 1 inclusive, all these values are possible. Say the ground truth is 1 and the model predicts 0.874311. We can backpropagate the loss and maybe improve the weights so that on next run the model will predict 0.89312, which is closer to GT.

One should be able to gradient descent to y=^yy = \hat y because that’s how a lot of weight updates are written.

Thanks for the response

I think I used the wrong terminology - when we say “accuracy,” we automatically think of the metrics we print out. I do understand that if we used accuracy 0/1 over a validation set, it will not work. But I was thinking of a situation where the output of a model is a continuous variable (say, sales of a store this month). 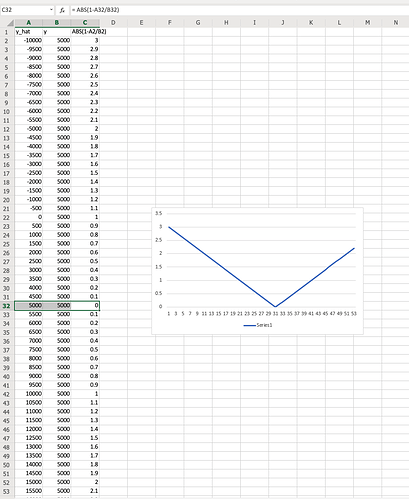 Well, radek explained it much better than I could, but I will try to expand it a bit if I can

First, the absolute value function is not differentiable at zero, so you have a problem there (edit: i don’t know if it’s really a problem, it’s basically what you have in an l1 loss, you could use the sign in the derivative). But suppose you took the square instead of the absolute value, well then you have to see how you define \hat y, because your network will output real value numbers, and you have to decide which of those number you take as your actual prediction, for example by taking a max of those numbers, which is another non differentiable function. I think you can “fix” this by doing some hacks like dividing by cases (like it’s done with relu), but in a regression setting, a loss function that cannot traverse the whole (positive) real line is not a very good loss function.

the absolute value function is not differentiable at zero

You’re right. I have a vague recollection of this from school. Is this the reason why we square then do square root (even though it feels like you’ll just come back to where you started with negative sign removed)?

Then how about this? 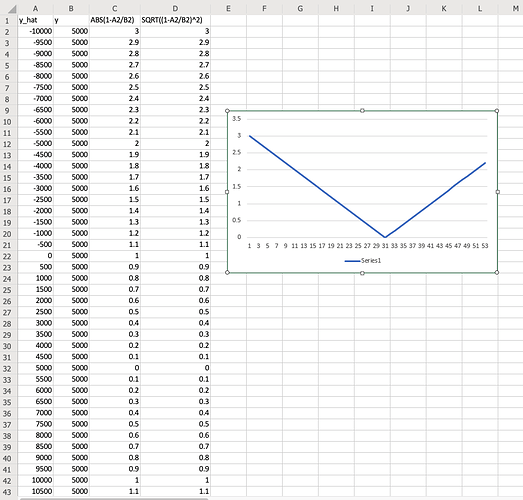 moment. This will become problem when y = 0. And what I am trying to create is starting to look more and more like RMSE by trying to fix all those issues.

Thank you for helping me work through this

Is there a chance to look into Hinton’s Capsule Networks?

Also, a deep dive in designing good reward function for Deep Reinforcement Learning would be awesome. Specifically, RL agents learn what they try to optimize, but when looking at data and Ai ethics, how can one ensure not to codify unwanted higher order effects. How can we even measure that?

After posting that I started thinking (and edited afterwards) and while it’s true that it’s not differentiable, you can use the sign to separate both cases when you are taking the derivative (image attached below), so it’s doable, it’s basically an l1 loss function. But I think you still have a problem with the \hat y, because thresholding on that conditions the values your loss function can take.

I think there are several reasons why you square and then take the root, but I haven’t thought it deeply so I may be wrong (note that when you do that, you take the square root of the sum of the squares. In the equation you wrote, the square and the root cancel each other, which does not happen for example when you do RMSE). One reason I can think of is because it’s really differentiable, another reason is because when you, for example, square the difference between predicted and actual, you penalize more heavily the errors than you do with absolute value, but then you can have the problem that all those squares added up amount to a very large error, so you “bring it down” to a more reasonable value by taking the square. It’s not clear to me now when you would want to do that, and when you would want to do just MSE. I think it’s an interesting topic to touch in the lectures.

First, the absolute value function is not differentiable at zero, so you have a problem there (edit: i don’t know if it’s really a problem, it’s basically what you have in an l1 loss, you could use the sign in the derivative).

It’s not a problem at all. It’s an infinitely small area where that happens.

I think I used the wrong terminology - when we say “accuracy,” we automatically think of the metrics we print out. I do understand that if we used accuracy 0/1 over a validation set, it will not work. But I was thinking of a situation where the output of a model is a continuous variable (say, sales of a store this month).

I always had a problem reading probability formulas in papers, they perhaps mean something simple, but looks very intimidating. It will be great if you can give insights on how interpret them and how not to sweat about it.

When Jeremy was showing “why sqrt5” notebook and conducted a few experiments with numbers, he used gut feeling and common sense to realize whether sth is concerning or not (I.e his version of init vs pytorch’s).

I often heard about statistical significance of experiments and as opposite p-hacking. What is that and whether Jeremy uses p-values in doing research?

Not sure if it fits with what you’re getting at, but I am very hand-wavy on GPU execution generally, especially when you have to specifically send something to the GPU in pytorch and when you don’t. I assume that pytorch “magically” executes things on the GPU wherever possible, but I also see explicit device='cuda' calls, so I’m not sure when you need to make that call.

I also strongly suspect that this could be answered by a source dive plus documentation read, and might not be the kind of “fundamentals” you’re getting at.

Edit: Yep, a documentation read and a source dive cleared it up.

this pytorch documentation page is very informative and particularly makes it clear that a tensor gets loaded to a device, and by default any tensors that result from an operation on that tensor will stay on the same device. Then, fastai’s torch.core library tries to use the GPU by default . So, most of what happens will happen on the GPU, if there is one, and unless you say otherwise.

I’m sure there must be edge cases where you’d need to manually specify and I’m still curious to find out what those are, but consider this question answered

I’m sure there must be edge cases where you’d need to manually specify and I’m still curious to find out what those are, but consider this question answered

We’re doing it in the lesson anyway

Use of *args and **kwargs

I have some intuition around it, but can’t fully grasp when to use what.