I’ll actually try to do the main coursework using a free cloud service (either kaggle kernels or google colab).

Hi! We’ll have the first fastai study group on Friday the 26th of October at 7PM at Cowork (Casa Tineretului Timisoara). We’ll have the place for ourselves for the night so we can take our time to discuss, set-up frameworks & code as much as we want.

Found the first lesson in fast.ai github repo (work in progress I think) and managed to run it in Google Colab with GPU enabled, after minor changes.
gist here : https://colab.research.google.com/gist/virgilpetcu/c60a7122fb9b58aaf790681254087989/lesson1-pets-working-in-g-colab.ipynb

So it looks like colab is a viable option

I’ve managed to get to the live YouTube video, but have no access to the part3 fast.ai section.
Didn’t see the any “acceptance” email apart from that accessing the fast.ai forum.

Is this normal ? Or does this mean that I’m not officially picked for this live course session ?

If you have no access to part3 forum and didn’t receive the email containing the youtube link then yes, you probably were not officially selected for the live course.

I’ve searched the forum regarding Google Cloud Platform’s 300$ free credit tier and it seems that, since 1st of April, GPU is not included anymore:

It’s seems like that using GPU with the free 300 usd is not possible anymore, I have just tried and it’s specified in https://cloud.google.com/free/docs/frequently-asked-questions

You cannot add GPUs to your Compute Engine instances.

As far as you can see in the upper part of the thread, prior 1st of April (no joke) GPU could be simply added to the free tier.

I guess we won’t know until someone actually tries it

(if no available GPU) like I did last year and now I’m not eligible anymore with my own account.

I’ve tried it now with a fake account and it seems to work with GPU though, but I’m still not sure because I did not succeed to start jupyter notebook (had some privilege-related errors).

But I think it should work because when listing available hardware of the instance inside the terminal, there is also a Tesla K80 entry (highlighted below with white). 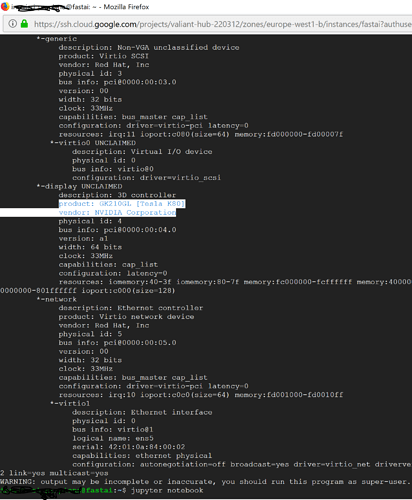 I will come back with an update if succeeding to start Jupyter notebook, but first I have to finish watching the first lesson.

BTW: The best datacentre to choose would be Europe-West1 (Belgium) since it is the nearest with GPU option.
All other European datacentre I’ve tried-out, seem to have no GPUs available (did not try all).

Good man! I don’t mind making new accounts as long as i can link them to the same credit card

Is it possible with the same credit card on another GCP account?

I’ve used another credit card since on Azure (some time ago) it refused the same card for another account.

No idea . Probably not

GCP works like a charm for me, managed to run the notebooks! thanks for the europe-west1 region tip, Teo. Also only 2 out of the 3 zones in the region have GPUs (europe-west1-b & europe-west1-c).
Here are the details: https://cloud.google.com/compute/docs/regions-zones/

(if no available GPU) like I did last year and now I’m not eligible anymore with my own account.

I also signed up last year, used about $5 of credit and a week ago was announced the credit expired

I’ll try to use Colaboratory, but I first have to go through the course!

If it helps anyone, below you’ll find the cli script for creating an instance, on European soil, which fits exactly the standard compute instance, which is recommended in the course’s Google Cloud set-up guide.

This seems one of only two possible standard compute options in Europe, since Tesla P4 (the course recommendation, which is way faster than K80, but far less expensive than P100/V100) is only available for europe-west4-b and europe-west4-c zones, as you can see below:

Maybe I’m missing something, but for some reason, the GPU reference above seems to be in contradiction with the documentation link shared by Virgil:

GCP works like a charm for me, managed to run the notebooks! thanks for the europe-west1 region tip, Teo. Also only 2 out of the 3 zones in the region have GPUs (europe-west1-b & europe-west1-c).
Here are the details: https://cloud.google.com/compute/docs/regions-zones/

Hey guys, I went through the lesson using Google Colab (using the notebook posted by Virgil) and everything works fine, but the training seems a bit slow. Is Google Cloud faster? Is it worth doing all the GCP setup (Colab worked with no setup at all) ? What are its advantages?

Totally worth setting up GCP!
Advantages :

Also those 300$ in credits should go a long way (more than enough to finish this course. maybe enough to do the advanced one too).

I expect problems in future lessons on colab, but I do intend to try and run at least the basic notebooks in colab too.

It feels to me that using resnet is a cheap trick. Your training is not any smarter/faster, you are just building upon a huge pre-trained NN which is awe-inspiring but you have no way to control.

The point of using a big pretrained net is you get really fast to a very good baseline. That is the state of the art recommended approach for most vision problems today. From there it’s your choice if you dig deeper to understand what’s going on to make your models better. OTOH you can use this powerful model you’ve already trained for your problem to train smaller models much better (this knowledge distillation technique should be covered in future lessons, but you can start looking into it from this paper https://arxiv.org/abs/1503.02531 ).

You can get a better feel of how good the framework is if you try to match the accuracy obtained in fastai in another framework. Then compare how much time it took you to write the code to do all you need and how much time the training takes on similar HW.

I played around with a kaggle competition last night and using code based on the Lesson1 notebook I got to around 96% accuracy in 30-40 min ( dowloading dataset + coding + training). Will share once I clean it up. I have much more experience with keras & tf but it would’ve taken me at least as much time just to write the data preparation code. Maybe I will try to match the result in keras during the weekend just for comparison.

I have little experience in this area, but I dislike the fact that there is a fastapi python library too.

It’s easy to code a ‘happy path’ into your API and then the examples look really short and powerful. Of course, once you need to change anything you have to dig down and then you see if the API is really well thought of or just veneer.

Knowledge distillation sounds cool to me as it also hides the implementation detail. It’s a form of obfuscation. I remember reading that some Google guys showed you could make an equivalent single-layer NN for a multi-layer NN.