OK sounds like we need to do both! Let’s see how many people are around, and we can either go in parallel or serial.

I don’t think I can teach something where we just implement something on top of a black box, so I’d want to fully understand what we’re building on and be able to reimplement it!

Looking at the Faster R-CNN implementations (PyTorch, Tensorflow, Caffee), they only include bounding box predictions, unlike the paper describes. I don’t think anyone has coded the segmentations part? In that case instance segmentation would also have to be implemented and adds to the difficulty. https://github.com/rbgirshick/py-faster-rcnn/issues/327

Considering the above, let’s call Friday an “implementation day” and let people work on something they’re interested in. We can use each other for support, but work on different projects if desired.

What do you think?

Other ideas to implement:

Considering the above, let’s call Friday an “implementation day” and let people work on something they’re interested in.

Personally I think it would be more fun to have no more than 2 projects, so that we can collaborate more.

Sounds good to me. Right now we have @Matthew @sravya8 @kelvin and myself joining.

I’ll scope out Mask R-CNN tomorrow and see if I can identify a small component we can carve out and implement. Something chewable

I just realized that I met @brendan yesterday during explaining the paper! (nice to meet/e-meet you, we should talk next time, this time I had to leave early)

In terms of the theoretical understanding, let me know if you have questions:
Since there isn’t exactly much difference from the previous work that those 2, Tirmasu and the Mask R-CNN have changed, except re-arrangement of tasks + network overlays.

The process of doing Semantic Segmentation can be a prior task to do Instance segmentation, since finding an instance of a class ( as in dog 1, dog 2, … dog n) in the picture requires some level of semantic understanding of the image.

After all, the Mask R-CNN is an evident result for having a simpler model that one task can help the other out to accomplish the full

@yad.faeq will you be around tomorrow if we have questions as we try to implement the tiramisu in pytorch?

Sweet, sure, what time is ideal, afternoon maybe? I will squeeze in time to stop by.

Oh great! Any time - I’m sure we’ll be posting updates and questions on the forum in the meantime…

@jeremy I’ll help you with Tiramisu in PyTorch. I think it’s doable and will be more fun. Mask R-CNN is a great paper, but it is significantly more complex and we would only be able to tackle a very tiny part.

We can build on the PyTorch DenseNet model and the author’s Tiramisu implementation in Lasange.

@matthew Tiramisu is designed for semantic segmentation. Mask R-CNN is more extensible, but I haven’t been able to find an implementation of instance segmentation among its predecessors (Fast, Faster, RCNN)

@brendan awesome! Are you free on the weekend? I am - so I’m hoping to keep hacking throughout the weekend. That might be enough time to do both properly…

Sweet! I will be here for any questions and also can stop by 5 in person : )

Yep! I’ve been reading and Densenets look really promising. Should be easier/faster to train given the fewer parameters. I’ll start another wiki thread for Tiramisu later today so we can share notes.

Here is a network from this paper: Shape-aware Instance Segmentation

As you can see, it does Instance Segmentation and uses almost the same network:

DeepConvs + RPNs to pick the Region of Interest + Bounding box and lastly the Instance Segmentation.

The Mask R-CNN uses a much simpler and modular network to do the task. Modular as in, the ResNeXt can be swapped out and swapped in, meanwhile the layers of Instance Segmentation can be increases and reduced without making it effect the Object Detection + Bounding Box.

Thought folks on this thread might enjoy reading this blog by Dhruv Parthasarathy about R-CNN, Fast-R-CNN, Faster-R-CNN and Mask-CNN

A Brief History of CNNs in Image Segmentation: From R-CNN to Mask R-CNN

At Athelas, we use Convolutional Neural Networks(CNNs) for a lot more than just classification! In this post, we’ll see how CNNs can be… 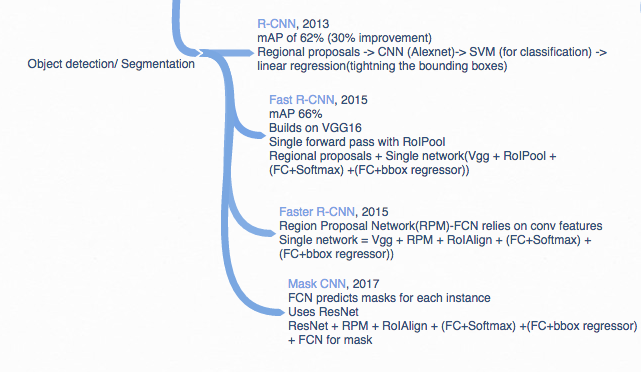 I was Going through the Discussion above…

No we ended up doing 100 layer tiramisu. 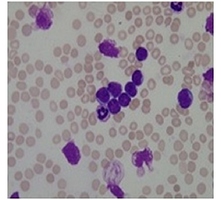