Has anyone been having issues with fastai imports? I did the following:

Then in the jupyter notebooks, when I run the import code, I get the following:

I’ve tried restarting jupyter notebooks but to no avail. Has anyone seen this and/or been able to fix it? Thanks! 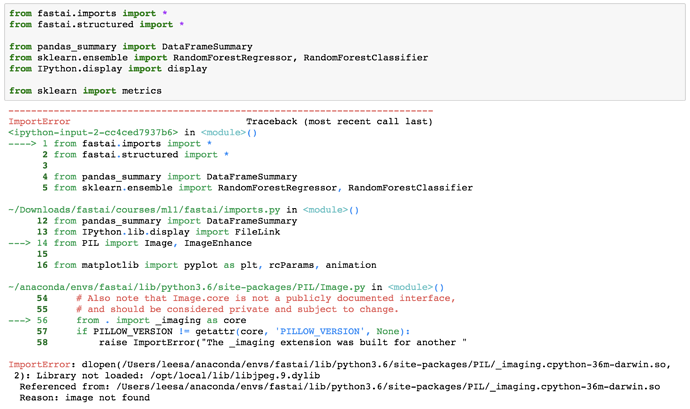 Having the same problem since yesterday. I also did the following steps.
git pull
conda env update
source activate fastai
Earlier everything was running fine on local machine.

Looks like a problem with the new version of pillow I created the other day. I didn’t have a problem on my Mac, but for some reason you are. Try pip install pillow-simd and see if that helps. If so, I’d love to work with you to figure out the underlying cause.

I am still having the same issue after doing pip install.

I managed to fix it but unsure exactly why it worked. Here’s what I did:

After starting up jupyter notebooks, it works again. @arpita give that a try and see if it works?

I just made some major changes to fastai. Would love help testing them out, getting comments, etc. They should fix some problems and open up some new options. To use it, git pull and then conda env update. Most importantly, I’ve removed opencv entirely, and replaced it with PIL. All image transforms now receive a PIL object, not a numpy array. (@yinterian I haven’t tested whether any of your coords transform stuff is impacted. Note in particular I’ve changed how resize() behaves - I think the c…

Any idea what went wrong?

@alvira that’s not the same problem - it’s showing a different error in a different place. Try conda update --all.

@jeremy I did conda update-all but I am still getting the error: 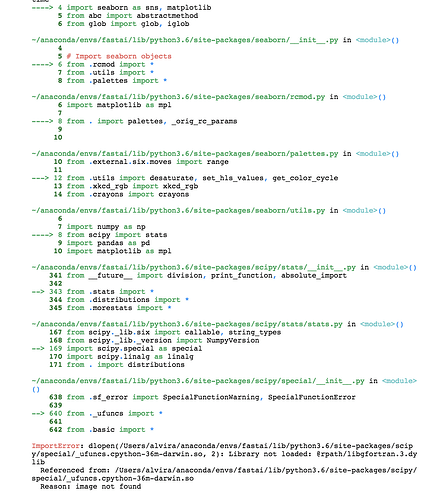 @alvira it may be best to just remove your ~/anaconda3 directory and reinstall anaconda from scratch - I’ve not seen that error before, so not sure how to fix it otherwise…