How did you save your work when you edited the fast ai notebooks, or if you created a new notebook from scratch? I find if I save my notebooks, stop the project, then come back later and start it all up again my work has all disappeared.

Did you connect your Google Drive account to your Project at Clouderizer?

Everything in the folders:

Are saved in the Drive inside a folder named clouderizer

The clouderizer platform sync these folders every few minutes. Wait for at least 5 minutes before saving the notebook to close your clouderizer project, or just check your Google Drive to see if the file was updated.

I’ve been working through all the lessons in Colab, and haven’t set up Clouderizer.

Here’s my notebook explaining how to use Colab for Fastai (including importing data from various places, which is where I’ve had the most trouble so far!). I’ll keep adding cells for each lesson as I work through it.

Always add a cell to the top of the notebook like this:

How to import data from Kaggle using the Kaggle CLI (lesson 2):
I found this forum post very useful.

Finally, if you’re worried about how much of the GPU is available, there’s a cell you can run that checks the % utilization of your current GPU. See the Stack Overflow link that Sebastian posted earlier on in this thread.

Hope this helps some of you get started more quickly!

Hello Everyone and thank you for your helpful comments.
I am new to Fast.ai and I have been trying to find the best way to get started with the GPU acceleration. Since I have a gaming laptop with Nvidia GeForce GTX 1060, I always have the option of running the notebooks locally. But since it is more convenient to run on cloud, I thought if giving Google Colab a try. So far, I have been unsuccessful in getting the session to run with GPA and always get the error:

Failed to assign a backend
No backend with GPU available. Would you like to use a runtime with no accelerator?

My guess is that I’m late to the party and everyone is using the GPUs. If you think this is the case, do you suggest any other free way of cloud computing or should I install Ubuntu?

You can try Kaggle Kernels, they include free GPUs now

Since Kaggle announced they were adding GPUs to Kernels, there’s been interest in running fast.ai on Kaggle Kernels. To make it easy for people to get started, I went through the Part 1 lessons and made the necessary tweaks to get them running in the Kernels environment. Here’s my blog post where I talk more about Kernels: https://medium.com/@hortonhearsafoo/announcing-fast-ai-part-1-now-available-as-kaggle-kernels-8ef4ca3b9ce6 And here are links to the Kernels: https://www.kaggle.com/hortonh…

Thank you for the tip. Actually I just found that out right when you posted. Cheers!

thank you for sharing this.

arch=resnet34
data = ImageClassifierData.from_paths(PATH, tfms=tfms_from_model(arch, sz))
learn = ConvLearner.pretrained(arch, data, precompute=True)
learn.fit(0.01, 2)
in colab this piece of code is taking about half an hour tell me how to do in less time?

Hi thanks but this doesnt work for it wont import fastai.transforms

Hi Wiliam thank you for doing this. Do you see any advantage using Kaggle vs google colab for fastai?

also I wonder why do you need to modify the dataset and the way it was structure? can we just leave it as is?

I’m planning to attempt working through the course just in Colab as well. I was able to get the first lesson imports running in a colab notebook with a few minor changes, and without pip installing fastai.

Then in order to upload the models - I downloaded (or cloned) the course github locally, then used this block of upload code to bring in files to colab, so they can be imported in the nb (separate cells for each below, see *** note below before attempting this):

***Note - before doing this, Google colab uses the v2 of Keras, so I made some minor adjustments to the files prior to uploading.

OK, now you can go use those little upload script cells to bring the altered files in the notebook. Finally run this in a cell:

Doing that got the next section of the official notebook code to work for me (also change batch size to 4 instead of 64 when you first run it). I realize I could probably just import fastai with pip but I kinda like having it by hand with manually uploaded files so I know it will be reproducible, and then I know where the dependencies are causing issues when things like Keras change versions.

edit! also important to actually bring the zip data into your colab environment if you do it this way. can be achieved like this:

you’ll then see the data in the colab file browser; also make sure to adjust path (from the official code) by running a cell with: path = “data/dogscats/”

Sorry for hijacking this thread as I am not able to find button to create new post.
I have been trying to use crestle to create an instance but its stuck for over an hour. I refreshed couple of times but it doesn’t move forward. Any idea how to solve this issue? 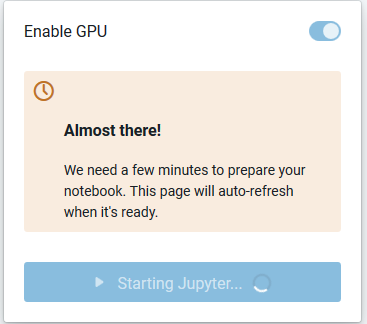 as abdullah said this failed in importing fastai.transforms. (I ran !pip3 install “fastai<1”) and then the usual importing.

Using your notebook, I am getting “module ‘torch’ has no attribute ‘float32’” error at
from fastai.transforms import *.

I dont think you can really get it run faster on Colab. I guess Colab only give us access to the least amount of GPU. Maybe you can try with more GPU on Google Cloud Platform.

i have gotten part of lesson1 working on colab:

used alot of this code:
https://colab.research.google.com/github/corykendrick/fastai_in_colab/blob/master/Using_Google_Colab_for_Fastai.ipynb#scrollTo=aBlnbQ-wJNCY

i do have some type-errors being thrown, if anyone can suggest a fix. tia

update: found this linked on wiki and wish i has seen it two weeks ago. first heard of fast.ai from announcement of new version-1 … on twitter… my mistake for not reading up first

The fastai deep learning library, plus lessons and and tutorials - fastai/fastai


only use conda for courses and not pip …

really enjoying the videos… thanks