Another treat! Early access to Intro To Machine Learning videos

proc_df is filling the median always…

Just think that what your model thought about a particular year(let’s say it the split point) in the training set,
It will be completely different to what it will be validated on…

That will do nothing beneficial but might make the model collapse…(especially if the size of the splits after the year are let’s say in the ratio 9:1 and our model will give wrong predictions)

Thanks for that. But I would like to comment on that. I don’t think proc_df should be used on the test data frame in the way it is used. If there is a value missing in the test set, it should be filled with the median of the values in the training set, because that’s what we’ve based the model on.

As a side note and not meant as a criticism towards your approach: There’s probably some “smarter” way to fill in certain values. For example, we see that “GarageBuilt” is one of the features that has missing values, but instead of just filling with the median, it would probably make more sense to look at the median difference between when a house was built and when the garage was built. In the notebook, the median for garage built is 1980. The funny thing is that a missing GarageBuilt value would still be set to 1980 even if the house itself was built in a later year

Your concern is quite right, in a strict mathematical sense. For most real-world datasets (including this one) this won’t be an issue. If you do it at a more granular level however it can become an issue, and my friends Nina Zumel and John Mount have written an excellent paper and library about how to handle that situation if you’re interested: https://arxiv.org/abs/1611.09477

It’s always possible to do smarter feature engineering, but the trick is to know when it’s helpful and worth the investment of time. In this case, as you’ll see later in the course, creating a time difference variable doesn’t generally improve the predictive accuracy of a random forest, but can help with interpretation.

Jeremy, in Lecture 7, approximately at minute 17:20, you talk about what to do when you have an unbalanced dataset, and you refer to a paper that found that oversampling the less common class was the best approach. Do you remember which paper it was?

No I’m afraid not. If anyone digs it up let me know! It’s probably in my twitter favorites or retweets, so that would be a good place to search.

hi,jeremy.lesson 2 of this playlist is not working. In our first challenge, 88 people submitted annotated line graphs with huge variety of tools. Click the link below to see the full recap post, including each submission and related commentary.

Hi everyone, I just got started in this ML course and I’m currently stuck at this Subsampling cell, does anyone know how to resolve this error?

This error appears both on my Google VM and local desktop .__. 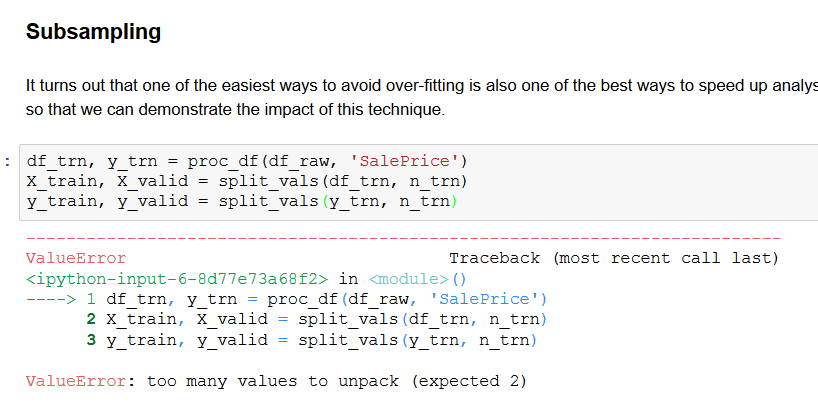 Looking at the API of the library, I think you have to change it to

What is regularised target encoding?
Any tips on this?
@radek @jamesrequa @alessa (sorry all)

Is it like subtracting min values of each columns?

I already tried that myself, the cell will pass ok but later cells will yield different results compared to the videos

Furthermore, the error stated that it expected 2 arguments, so it’s really confusing.

What exactly you want to accomplish?

Have a look here

Hi everyone, I just got started in this ML course. Can someone help me understand the parameters passed in the below functions.

What are X-train, y_train here?

I guess you should dig in books a little bit

This is designed to be a standalone intro to machine learning - we shouldn’t be asking people to read other books to understand it! It sounds like we may need to add more information to the notebooks to help people interpret them.

Actually I am working on collecting different shorthands fast.ai uses…

Is low accuracy when you OHE all variables because each tree selects a random subset of the features? Each tree would have less information to learn from.