Why is nas variable necessary?

I have found the ‘nas’ variable twice. Why is it necessary?

I am trying to understand what is the use for ‘nas’

I think nas is just to identify what variables had missing values and what value it is replaced with.

When you use the proc_df function. It finds numerical columns that have missing values and creates an additional boolean column as well as replacing the missing with medians. It also converts categorical objects to integer codes.

So the additional variable ‘nas’ is used as a dictionary whose keys are the names of the columns that had missing values and the value in the dictionary is the median. So when training a different set of data, ‘nas’ can be passed through into proc_df as an argument to make sure those specific columns are made and the missing values are replaced with the same median.

Thanks for taking your time to reply. I appreciate.

Got it. This well explained and I have understood. Thanks so much

Hello pls how do i apply proc_df on my test data

There is now an additional return variable nas from proc_df which is a dictionary whose keys are the names of the columns that had missing values, and the values of the dictionary are the medians. Optionally, you can pass nas to proc_df as an argument to make sure that it adds those specific columns and uses those specific medians:

This answer is well illustrated here

While trying to implement a quick random forest classifier in the titanic kaggle competition, I ran into an error when using proc_df on my test set.

Proc_df created a 'Fare_na' column, which was not in my train set when I initially fitted my model. Therefore, when I ran m.predict on my test set, I gave me an error because it add an extra feature.

Wouldn’t the normal behavior of proc_df be not to create additional na columns for the test set ? Or am I doing something wrong ? 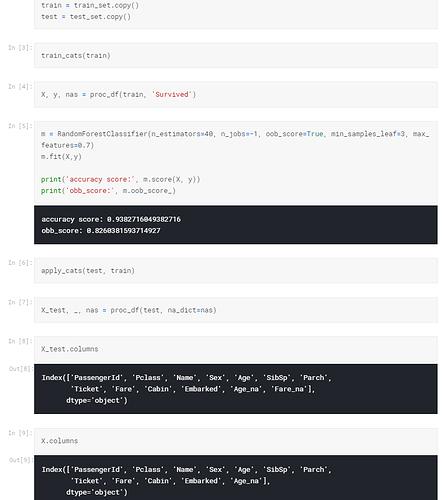 @raimanu-ds could you please post the error and the code associated with it?

However I believe your code should look like this

Here is the code:

This has worked for me. From the documentation

mapper: A DataFrameMapper which stores the mean and standard deviation of the corresponding continuous
variables which is then used for scaling of during test-time.

mapper: If do_scale is set as True, the mapper variable
calculates the values used for scaling of variables during training time (mean and standard deviation)

Hi @Buddhi does the following statement hold as true?

So according to Jeremys lectures, from the notes generated by Hiromi Suenaga. He states the following:

This all depends if the larger dataset is the training set, in case its the other way round, I guess start off applying proc_df on the test set and then training set.

Thanks @Buddhi, perfectly understood. And yes, it does sound right.