I’ve preprocessed the data to remove all columns and just keep the lyrics, shuffled the lyrics and stored them in a .txt file.

20% for Validation and 80% data for training. Moved the two .txt files to respective folders.

Here is my accuracy values from the learner.fit()

However, the outputs generated are:

The words keep repeating themselves.

My repository:
https://github.com/init27/LyricGenerator
Can someone please help me find the fault in this model?
@Jeremy Is the problem because I’m using just two .txt files inside the test and train paths?

PS I don’t listen to music …so very little knowledge

This isn’t going to help, but maybe your model is partial to The Proclaimers.

hahaha ! Couldn’t help laugh at this.

Haha. Yes, but I hope to make the chorus with a few more words atleast.

At first glance, it does not look like you are iterating when you are looping. My guess is you are feeding the same values into the model over and over while you loop instead of feeding in the previous output.

I think yes. But I’ve directly copied the lines from lesson 4. So that might not be the issue.
I’m not sure though…

s. But I’ve directly copied the lines from lesson 4. So that might not be the issue.

I’m not sure though…

Yeah don’t think that’s it now that I look at your code.

Because of an ASCII code issue, I had moved all the lyrics into a single .txt file and then converted the encoding to ASCII via a text editor. So I’m using a single file as the Path to Test and train set.

Could that have caused the issue?

So I ran in to the same issue with the songs. I’ve seen this exact problem jeremy outlined a solution here Configuring stateful lstm cell in the the language model

This is a common problem with text generation networks which is compounded when songs have a lot of repeating chorus. One non machine learning way of solving this issue is picking the top 5 most probable word instead of the top one which keeps the song from repeating.

The other solution i’ve heard is using a pretrained embedding like https://github.com/facebookresearch/fastText

I’m curious if there are a lot (more than prose) of unique/ different words…Perhaps remove a larger fraction of them?

I had seen a similar ‘looping’ of characters while trying out Karpathy’s Char-RNN model, he mentions it briefly. Some people have observed better ways to come out of loops by 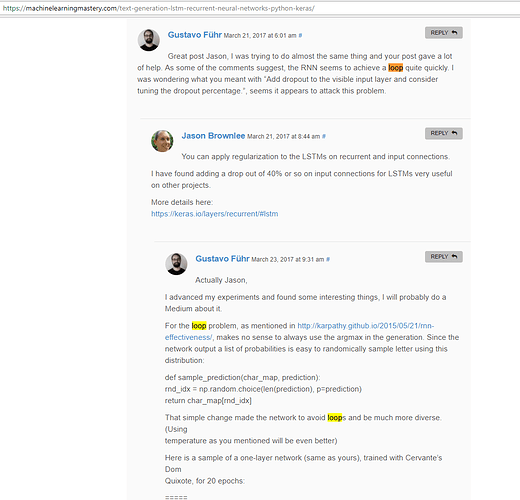 Funnily enough, the exact paper you all want has just been written:

I’m curious if there are a lot (more than prose) of unique/ different words…Perhaps remove a larger fraction of them?

Wouldn’t removing the unique words re-enforce the problem by increasing the probability of repetitive ones? Since most songs have tremendous repetitions (Particularly the old songs-which I realised after going through the data).

I’m trying the 2nd approach by tweaking the parameters, still no luck yet

@init_27 Hi Sanyam, I am interested in NLP as well. I found a blog post (with a paper) below. I think the " Eliminating Repetition with Coverage" session may help your problem conceptually. The interactive example is very cool. But, the system is not perfect yet.

Nice! How many lyrics are you using to train?

Now, you need music to go with it.

I’m playing around with Google magenta